Every year there are complaints -- even ridicule -- from students, parents and media about the ONET test's irrational questions. Some have been known to provide more than one answer. (Bangkok Post file photo)

For the past 15 years, the Ordinary National Education Test (O-Net) has been the target of criticism. Introduced to test the academic proficiency of students nationwide in 2005, it has been attacked for its failure to improve their knowledge and skills. 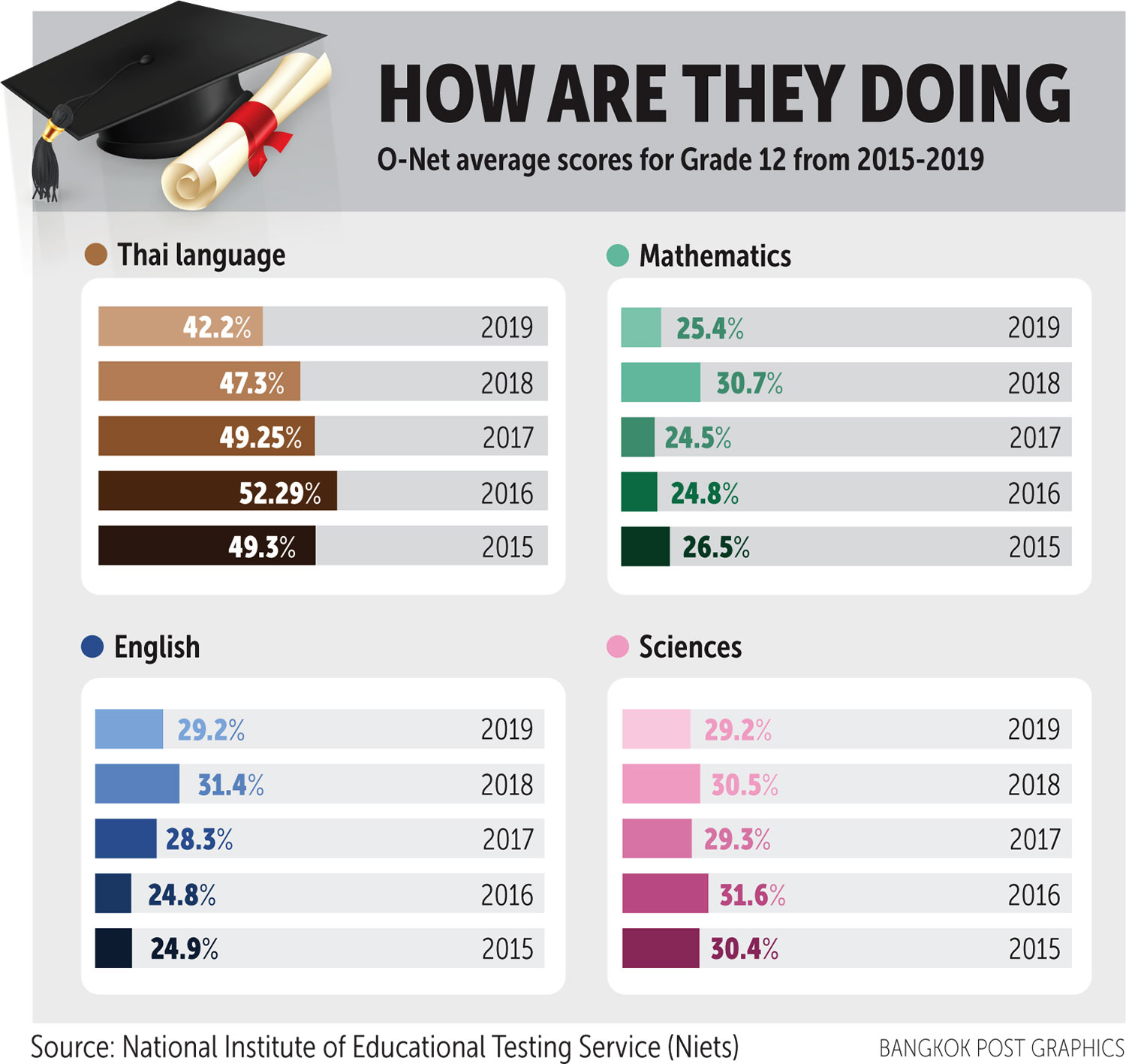 In addition, every year there are complaints -- even ridicule -- from students, parents and media about the test's irrational questions. Some have been known to provide more than one answer.

Recently, the Education Ministry was reported to be considering replacing the O-Net with more "relevant" academic proficiency tests.

Academics also questioned the quality of education at the national level and O-Net's ability to assess students' academic proficiency.

Athapol Anunthavorasakul, a lecturer at Chulalongkorn University's (CU) Faculty of Education, said he wondered whether O-Net could help nourish critical thinking, a quality perceived as lacking among Thai students.

"Unlike the Programme for International Student Assessment (Pisa), O-Net does not test students' use of knowledge and critical thinking," Mr Athapol told the Bangkok Post.

"Students who wish to do well in the multiple-choice O-Net exams need [only] to remember facts and formulas. There is no incentive for students to develop research skills, writing skills or critical thinking skills because the O-Net isn't going to be testing them."

Mr Athapol said a good national examination should provide information that can be used to improve the educational system. "But that doesn't seem to be the case for O-Net as the number of students who fail the test remains alarmingly high year after year," he said.

All Prathom 6 (Grade 6), Mathayom 3 (Grade 9) and Mathayom 6 (Grade 12) students must take the test to assess their academic proficiency.

According to the National Institute of Educational Testing Service (Niets), the average O-Net scores of sixth graders in the 2019 academic year were below 50% (with 100 as the highest score) in all four subjects tested.

The average score in the Thai language examination was 54.4%, while the average scores were 34.4%, 32.9% and 35.6% for English, mathematics, and general sciences respectively.

The results also showed that on average, most Grade 9 students failed three out of the four subjects -- only Thai language managed to record an average above 50% (55.1%).

Moreover, the average O-Net scores of Grade 6, Grade 9 and Grade 12 in previous years weren't much different.

In the 2018 academic year, Grade 6 and Grade 9 students failed most O-Net subjects, while in 2017, the average O-Net scores of sixth and ninth graders were below 50% in every tested subject.

For Mr Athapol, this is evidence of a systemic problem.

"This indicates the results of O-Net tests have never really been used to improve the quality of the educational system," said the lecturer.

"The O-Net is seen more as an academic competition rather than a tool for children's development."

"Most concerns arising from the exam results are about the inequality and discrepancies in the education system -- this can be seen in the wide gap between the scores of urban and rural students," he said.

"The low O-Net scores show the Education Ministry's efforts to improve education, despite [receiving] higher budgets every year, are not sufficient."

According to a World Bank report in November, the level of knowledge among rural students in Thailand was about three years behind students in urban areas due to a lack of qualified teachers.

The report also found the families of rural students could not afford to pay for private tutors or send their children to cram schools.

"Although we know what the problems are, we've never been able to narrow this gap," Mr Sompong said.

"This reflects the failure of our educational policies."

The overall poor results of the majority of students in O-Net exams have finally prompted the ministry to attempt to rectify the situation.

Education Minister Nataphol Teepsuwan last month ordered Niets to review the efficiency of the O-Net testing system and the repercussions of cancelling it as better alternatives were sought.

A recent online survey by his ministry asked students around the country whether the O-Net test should be scrapped -- a whopping 80% of respondents said yes.

Mr Nataphol then signed an order cancelling O-Net exams for sixth and ninth graders for the 2020 academic year.

This means about 1.3 million Grade 6 and Grade 9 students nationwide will not have to sit the O-Net exam in February next year.

"It was due to Covid-19 that the test was cancelled as students have not been able to study properly.

"However Grade 12 students still have to sit the exam because O-Net scores are still one of the criteria for admitting students to universities," Mr Nataphol said recently.

The minister acknowledged there had been several proposals to replace O-Net with a different type of test to assess students' academic proficiency.

He also agreed the O-Net needed to be overhauled to better serve its purpose.

"Some people have suggested that the O-Net should be taken by Grade 6 students only, in which case the ministry can adjust the curriculum for older students, based on the test results," said the minister.

"Some proposed that it should be randomly administered on students, like Pisa tests, however the ministry needs a little more time to discuss with Niets about how the test should be adjusted or what kind of new assessment we are going to use."

Both Mr Athapol, the CU lecturer, and Mr Sompong, the industry expert, suggested Niets move away from a high-stakes national exam to a more evaluative assessment.

The pair believe such a move could bring about improvements in classroom teaching and learning.

"As the ministry is now working to revamp the Basic Education Core Curriculum 2008 to focus more on the development of students' analytical thinking skills, the national test should be designed accordingly," Mr Sompong said.

"The test should reflect the vision of the 21st century."

Mr Athapol had a word of caution, however, suggesting the new version of the national exam should not be held just before students graduate. Instead, it should take place in the middle of each educational level.

"For instance, the assessment should be held for students in Grade 4, Grade 8 or Grade 11," he said.

"That way, it gives teachers, schools and the students themselves time to make improvements before the latter are set to graduate.

"If we design it well enough, the test could provide a complete picture of how students are really learning across Thailand and we would finally know the right moves to make."