As Thailand's vaccination drive looms, the government moves to allay fears about the Chinese vaccine it plans to use

All safe for return Migrant workers from the Central Shrimp Market in Samut Sakhon after they completed quarantine at a field hospital based at the provincial stadium yesterday. The shrimp market was found to be an epicentre of the pandemic when a stall owner was found infected in mid-December. (Photo by Arnun ChonmAhatrakool)

The Public Health Ministry has confirmed that people in four high-risk groups -- including the elderly and frontline medical workers -- will be the first to be inoculated against Covid-19 when Sinovac's vaccine arrives in Thailand next month. 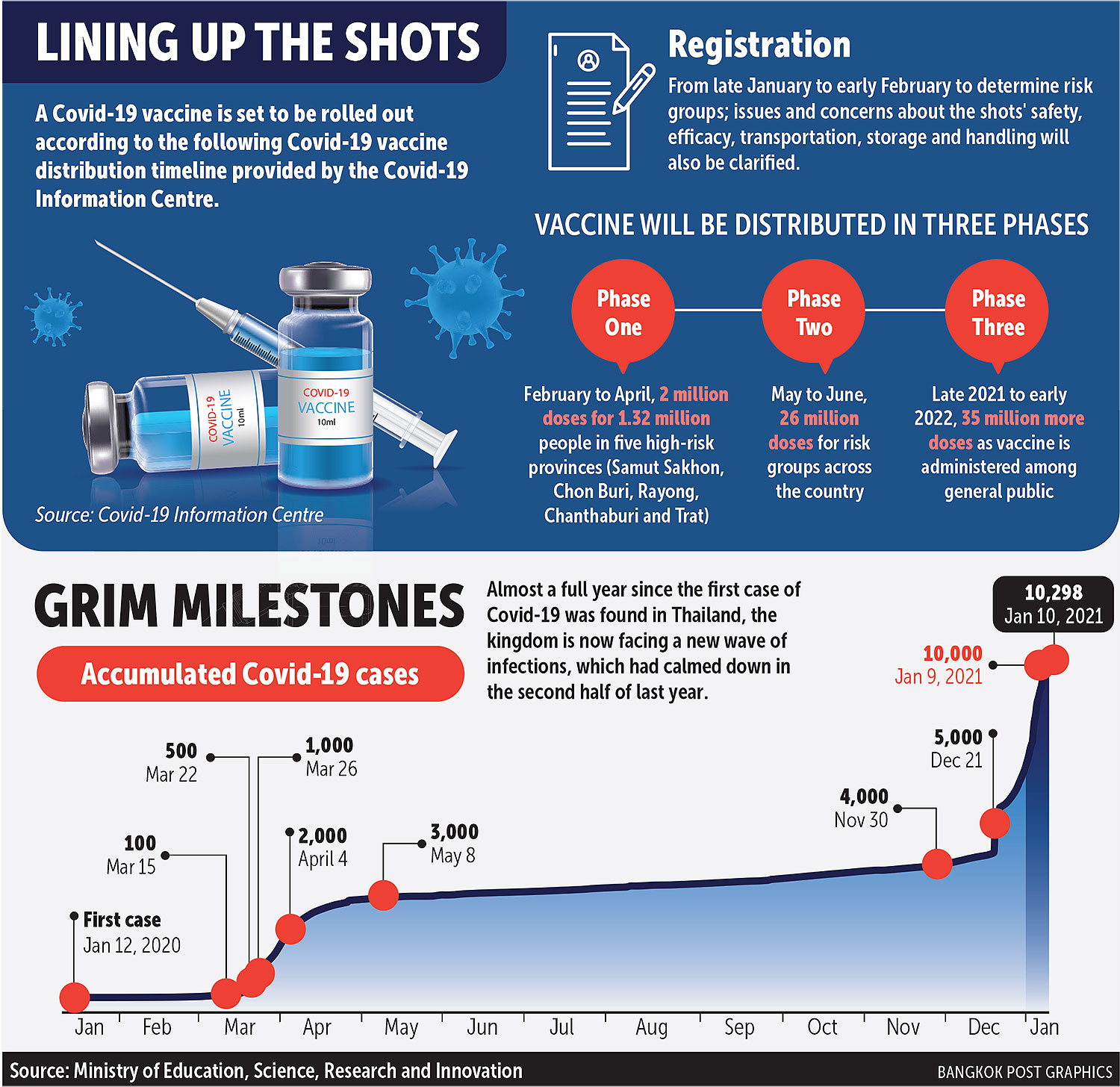 Director-general of the Disease Control Department, Opas Kankawinpong, said on Sunday the vaccination programme will be managed in a prudent manner, taking into account the experiences of other countries in deciding which part of the population should be inoculated first.

Among those who will receive the first doses are frontline medical and/or public health workers; sufferers of congenital diseases who are obese; senior citizens aged 60 and above; and officials working to contain the virus in the hotspot provinces of Chanthaburi, Chon Buri, Rayong, Trat and Samut Sakhon, the ministry said.

According to the ministry, the vaccination will proceed in three phases.

The first, which will run from February to April, will see 2 million doses for 1.32 million people distributed across the hotspot provinces.

The second, from May to June, will see at least 26 million doses rolled out to cover vulnerable, high-risk groups across the country.

The ministry expects the final phase, which will see the vaccines being made available to the general public, to begin either late this year or early next year.

To ensure the efficiency of the rollout, two vaccine distribution hubs will be set up -- one at the Public Health Ministry and the other at the Government Pharmaceutical Organisation. From there, the vaccines will be distributed to community hospitals in the provinces by local public health agencies.

In Bangkok, the vaccinations will be carried out at public health centres, he added.

Some personnel training will be required, as the vaccine must be administered again within a certain period to ensure its efficacy. A follow-up session will be scheduled about four weeks after the first dose to see if the recipients develop any side effects.

The director-general of the Department of Medical Sciences, Supakit Sirilak, said that before deciding to buy from a vaccine manufacturer, the government takes into account several factors, which include the vaccine's properties, its price, as well as the manufacturer's capacity to produce and deliver them.

However, Dr Supakit said, the government is expected to purchase the vaccine from no more than three manufacturers.

"There will be enough vaccine for everyone, free of charge," he said.

Also on Sunday, the permanent secretary for public health, Kiatiphum Wongrajit, defended the use of Sinovac's product, saying the Chinese-made vaccine is produced with reliable technology and no reports of serious side effects have emerged after its use.

Earlier, the deputy chairwoman of civil society group FTA Watch, Kannikar Kijtiwatchakul, voiced her concerns about the Sinovac vaccine, saying its efficacy and safety remain unclear, as it has yet to progress beyond Phase 3 trials.

To ensure its safety, the Food and Drug Administration (FDA) has pledged to prioritise patients' well-being when it evaluates the vaccine, which is expected to arrive next month.

"The decision to approve that vaccine will depend on its safety and efficiency," said Surachoke Tangwiwat, the FDA's deputy secretary-general. "Our experts will look into the scientific evidence that will be sent to us."

Dr Surachoke said the FDA is waiting for Sinovac to send documents for the FDA to review and insisted officials will not fast-track the approval process.

He admitted that the plan to administer the vaccine next month may still change, as the FDA will have to adhere to the strictest health and safety principles.

"And if we don't have all required documents to verify its safety, it is possible we won't approve it," he told the Bangkok Post.

He noted that Sinovac's vaccine is still awaiting approval from Chinese authorities.