KANCHANABURI: Three Thais driving separate vehicles were arrested and a total of seven illegal migrants taken into custody at road checkpoints on Friday, as smugglers turn to using small vehicles to bring in a few workers at a time.

The car was driven by a woman, Sasiphen Sillapachai, 44, of tambon Nong Lu in Sangkhla Buri district. Inside were four Myanmar nationals - a 43-year-old man, two women, aged 33 and 17, and a 9-year-old boy. All were illegal migrants.

Ms Sasiphen confessed to taking them from Sangkhla Buri district to meet job brokers at a pavilion in front of Robinson department store in Muang district. The brokers supplied migrants to employers in Bangkok, she told police.

The job brokers were later also arrested, but police gave no details.

Police said Ms Sasiphen was the wife of a tambon administration organisation official in Sangkhla Buri district. She had a gem trading business in the border district, and a tourism  business in Myanmar’s Phyathonzu border town. (continues below) 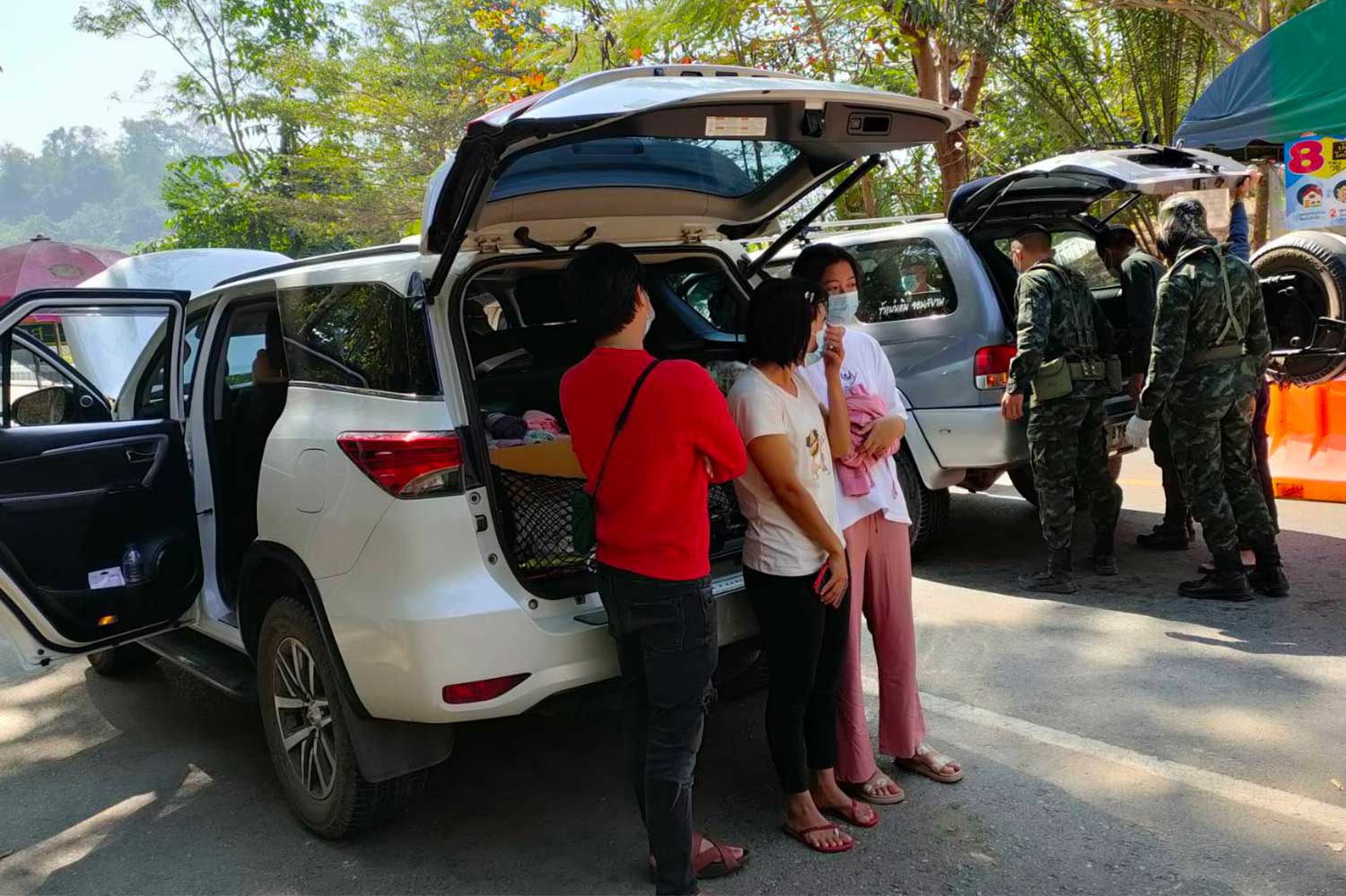 Two Toyota Fortuners are stopped for a search at a checkpoint in Sangkhla Buri district. Two illegal Myanmar migrants were found hiding in one vehicle, and a third in the second  vehicle. The two Thai drivers were arrested. (Photo: Piyarat Chongcharoen)

Mr Prawit confessed he was smuggling them from Phra Chedi Sam Ong village, or Three Pagodas, in Sangkhla Buri district to Bangkok, where a job was waiting for them.

A search of the second vehicle, driven by Atchara Chinsoranan, 40, of Ratchaburi province, uncovered a 42-year-old Myanmar man hiding under a blanket in the third row of passenger seats.

Ms Atchara told police the man was a former employee. She had picked him up at a market in Sangkhla Buri and taking him to work at her shop in Ratchaburi.

Officials checked the temperatures of all occupants of the three vehicles. All were below 37.5°C. They were handed over to police at Thong Pha Phum and Sangkhla Buri districts.

An official at the checkpoint said smugglers had switched to using personal vehicles to bring in a few illegal  workers each time, instead of using vans or trucks carrying many of them.

WELLINGTON: Prime Minister Jacinda Ardern urged New Zealanders to "call out" Covid-19 rule-breakers Monday, as public anger built over a series of infringements that forced the country's largest city back into lockdown.