Pro-democracy protestors confront riot police in Bangkok on Monday in the area where Myanmar migrants were demonstrating after Myanmar's military detained the country's de facto leader Aung San Suu Kyi and the country's president in a coup.

Riot police on Monday broke up a rally held outside the Myanmar embassy in Bangkok and arrested a Thai protester. At least two people were reportedly injured.

About 150 riot police were called into the area on Sathon Road to disperse the protest against the military coup in Myanmar.

A police source said a security guard was arrested, but Piyarat “Toto” Chongthep of the We Volunteer (WeVo) Thai pro-democracy group posted a message saying at least three people were detained.

Police estimated 200 Thai activists, 100 WeVo members and 100 Myanmar supporters of Suu Kyi had had gathered outside the embassy on Sathon Road to condemn the coup in the neighbouring country and demand the Thai government do likewise.

"Thailand must not endorse and legitimise this coup — as well as coup government,"  WeVo said in a statement.

"We affirm that as a member of Asean, we cannot stay silent after such an evil and unlawful act." 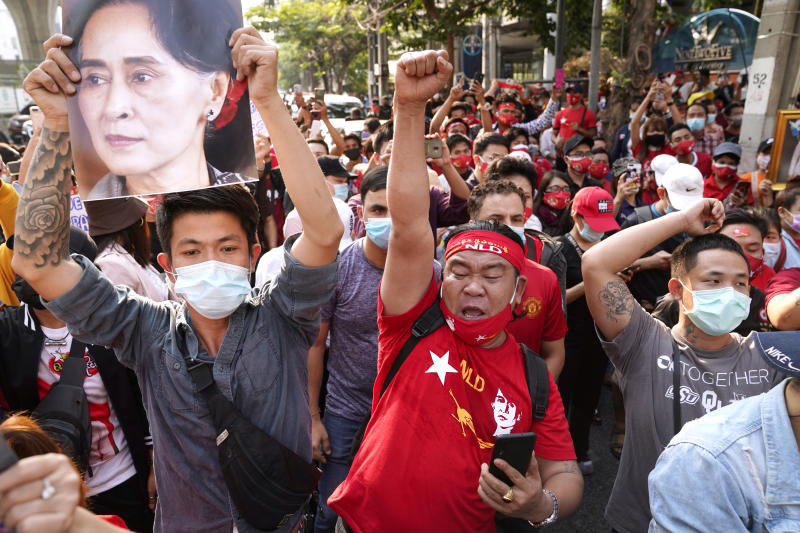 National League for Democracy Party supporters shout slogans outside the Myanmar embassy in Bangkok during a rally against the coup in Myanmar. (Reuters photo)

But Mr Chongthep, the WeVo activist, disputed that notion, saying "We never accept a coup -- no matter who [launches] it."

Parit "Penguin" Chiwarak, a key member of the United Front of Thammasat and Demonstration, said the situations in the two countries were quite similar as Thailand has also spent years under military dictatorship.