Ratsadon protesters listen to a speaker near Parliament on Saturday. The placards on the barriers show the prime minister and nine cabinet ministers who faced a no-confidence vote earlier in the day. (Photo by Wichan Charoenkiatpakul)

A few hundred activists gathered on Saturday evening for what they called a people’s no-confidence debate outside Parliament amid tight security provided by 4,000 police officers on rotating shifts.

The event came hours after a series of votes inside the legislative chamber, where Prime Minister Prayut Chan-o-cha and his nine cabinet ministers survived a censure debate as coalition MPs closed ranks around them.

The evening activity was held by the United Front of Thammasat and Demonstration, a student group under the umbrella of the broader Ratsadon or People’s Movement, outside the Parliament complex at the Kiak Kai intersection.

The rally was preceded by rumours that its guards would be armed with 40 ping-pong bombs, a claim denied by Panusaya “Rung” Sithijirawattanakul, a core leader who insisted the demonstration would be peaceful.

Organisers on Saturday handed out pamphlets on civil disobedience and participants were asked not to carry with them any kind of weapons, especially bombs, guns and firecrackers.

The precaution was taken in order to avoid a repeat of last Saturday, when a number of protesters were seen throwing stones and objects and splashing paint at a stationary line of police. Most of the violence took place after the majority of demonstrators had dispersed peacefully.

The demonstrators’ demands remain the same — Gen Prayut’s resignation, a rewrite of the constitution and reform of the monarchy.

The demonstrators were asked to make their own placards to send messages to the government. Most of them focus on Section 112 and the need for monarchy reform.

No stage was set up but key members addressed the crowd from a pickup truck.

Organisers announced an end to the peaceful event shortly before 9pm.

Meanwhile, a group calling itself the “Progressive Red” started gathering near the Democracy Monument at about 3.30pm, with food supplies and a pickup truck equipped with loudspeakers.

They claimed they did not know the rally site was at Parliament. However, they remained where they were because the protest site there would not be safe if there were a clash between protesters and the police.

At Sanam Luang, razor wire and barriers made of double-stacked containers were put up around the Royal Palace. Authorities explained they needed to protect important sites, even though protest organisers had said they had no intention of going to the area.

Also on Sunday, more people joined the march from Nakhon Ratchasima to Bangkok led by the Dao Din group to campaign for the release of four activists held during pre-trial on lese majeste charges. Among them was the mother of Parit “Penguin” Chiwarak, one of the four who had been denied bail twice. 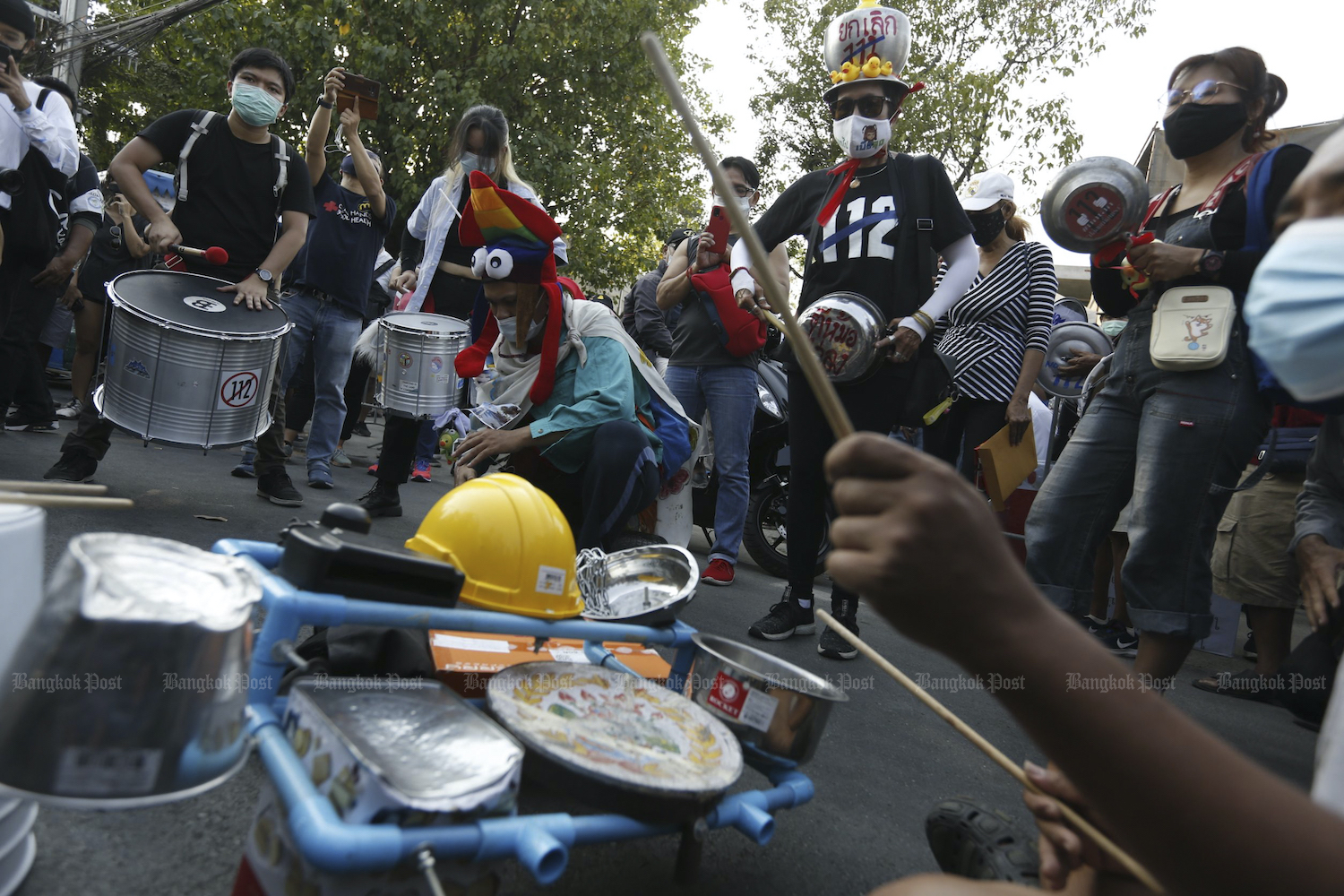 Rhythm of reform: Drumming augments the beating of pots and pans at Saturday’s rally. (Photo By Wichan Charoenpakul)