Prime Minister Prayut Chan-o-cha on Monday announced he is ready to be the first Thai to be vaccinated against Covid-19 in a bid to boost public confidence in the China-made vaccine.

"I will if I can...and I'm ready for the jab," the prime minister said on Monday in response to media questions if he would be the first to be inoculated.

The prime minister's wish may not be granted, however, after health experts announced that priority will be decided according to age.

Dr Sopon Iamsirithaworn, deputy director-general of the Department of Disease Control, said on Monday that Sinovac's vaccine is only recommended for those aged 18-59 due to insufficient data to support its efficacy among those who are younger or older.

He did, however, warn that Sinovac's formula is not recommended for pregnant women or those who have had adverse side-effects from other vaccines in the past.

Tomorrow, Gen Prayut is scheduled to be in attendance when the first delivery 200,000 doses land at Suvarnabhumi airport on a Thai Airways International flight from Beijing.

The flight is scheduled to touch down at 10.05am local time.

The PM said that as more supplies arrive, the National Vaccine Institute will decide who is in line for each round of shots.

Another 800,000 doses from Sinovac will arrive in March and 1 million more in April. The government has also purchased 26 million doses from AstraZeneca, a British-Swedish pharmaceutical company. 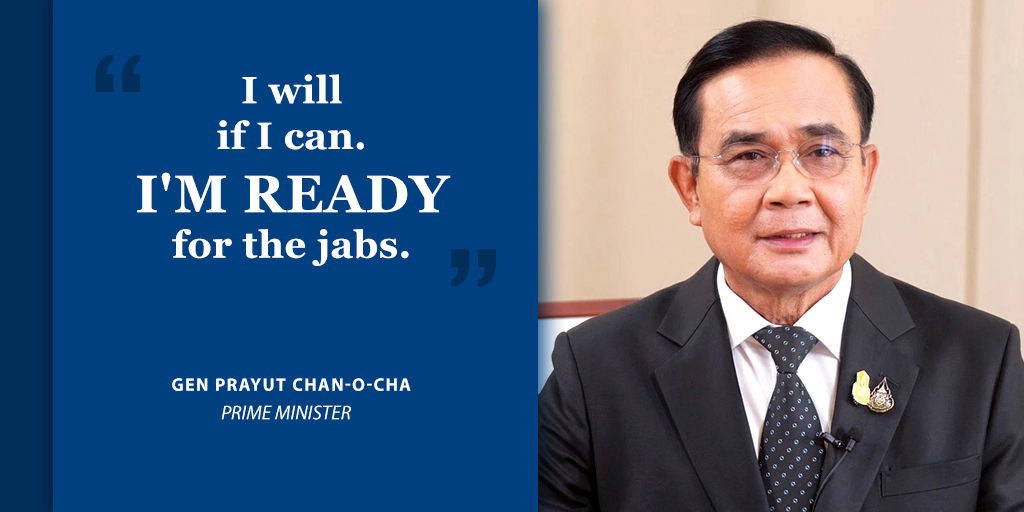 When the vaccines arrive tomorrow, customs officers and officials from the Food and Drug Administration (FDA) and Government Pharmaceutical Organisation (GPO) will work together to pack the 2-6-tonne consignment into temperature-controlled storage.

The event would be attended by high-profile figures in the government and health experts as well as representatives from the Chinese Embassy.

The process is expected to take about 30 minutes ahead of the shipment being transported to a warehouse owned by DKSH, one of the country's largest distribution and logistics companies for medical products, 20 kilometres away.

The GPO has signed a deal with DKSH for the storage, repacking and distribution of the Sinovac vaccine.

Dr Paisarn Dunkum, secretary-general of the FDA, said on Monday that all the paperwork necessary to begin mass immunisation would be signed off in time for the first shots to be administered on time, later this late month or in early March.

The public health minister, Anutin Charnvirakul, however, remained tight lipped about the exact date of the first jab.

"I think we shouldn't give an exact time and date as being just two minutes late could provoke criticism. What if an aircraft engine fails to start? If the vaccine doesn't arrive, it's not the government's fault," he said.

The government has come in for criticism for lagging behind its Southeast Asian neighbours Cambodia, Indonesia, Laos, Malaysia and Singapore, which have already taken receipt of shipments of the vaccine.

The opposition also attacked the government over the economic damage caused by the delayed rollout during the censure debate last week.

Samut Sakhon province has advised people who want to receive the Covid-19 vaccine to contact local administrators or local healthcare offices, although only Thai nationals aged 18-59 are currently being considered.

Under the programme unveiled by the Ministry of Public Health Ministry on Feb 11, health authorities will distribute 2 million doses to 10 of the worst-hit provinces.

They are Samut Sakhon, Bangkok, Nonthaburi, Pathum Thani, Samut Prakan, Rayong, Chon Buri, Chanthaburi, Trat and Tak. Among the first to receive the shots will be medical personnel and those with underlying health conditions.

Covax is a global pooling mechanism for vaccine procurement which is intended to ensure equitable distribution of Covid-19 vaccines.

Yong Poovorawan, chief of the Centre of Excellence in Clinical Virology at Chulalongkorn University, last week urged the government to consider a range of suppliers to improve the choices available.

More than 200 million doses of vaccine produced by major companies have been administered so far globally and the side effects had proved no worse than those associated with traditional flu jabs, he wrote in his post.