Jaruk Srion, Chanthaburi MP from the Thai Local Power Party, is flanked by officers from the Khao Ang Rue Nai Wildlife Sanctuary after he sought their advice and help to stop wild elephants foraging for food at villagers' plantations. Jaruk Srion

Jaruk Srion, MP from the Palang Thong Thin Thai Party, is spearheading a campaign to prevent wild elephants from foraging for food in villagers' plantations in Chanthaburi, proposing a "Chanthaburi model" to tackle the problem.

The long-standing problem of elephants raiding plantations in Chanthaburi has been a challenge for the MP since he took office over a year ago. The conflict between humans and elephants is a terrible blow to local fruit farmers in this eastern province -- some of them saw their crops disappear overnight after wild elephant ravaged their land.

"The elephants come down from the mountains and eat fruit along with the plants that take five years to bear it." 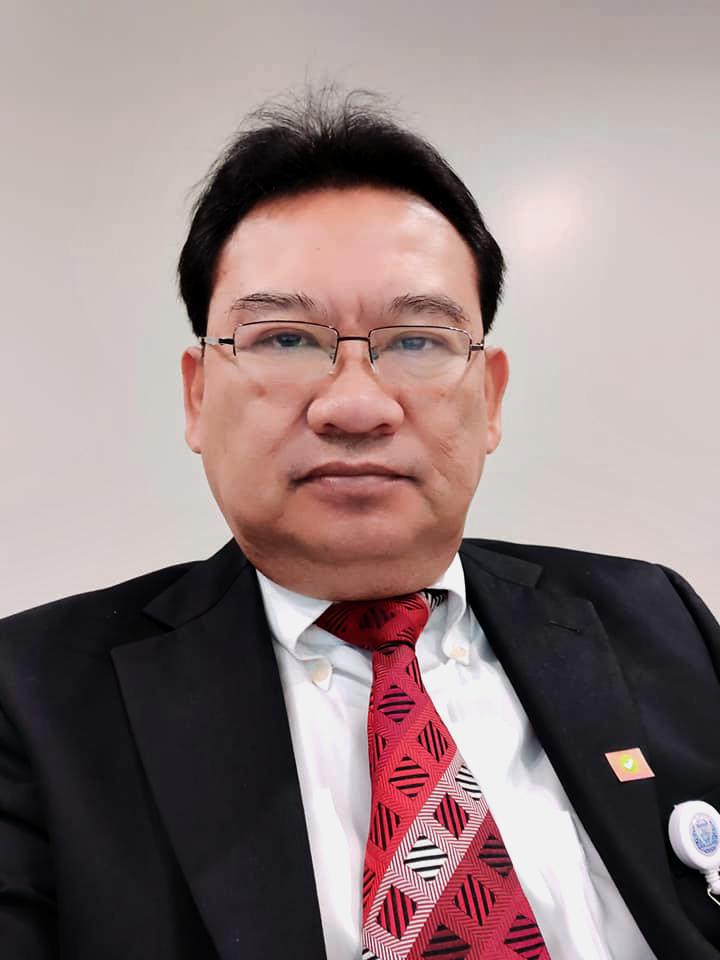 Jaruk: Party chief for the east

The main solution used by Chanthaburi to tackle this problem is to construct fences and moats to separate forests from villagers' plantations. However, elephants still manage to invade farms as soon as this infrastructure falls into disrepair.

Five-metre-wide moats were constructed along a 150-200 kilometre boundary, from Wongkot Mountain to Soi Dao district. Excavated earth from the moats was used for the construction of roads alongside the moats, he said.

"Roads were constructed in parallel with the moats to facilitate inspection and maintenance of the moats and fences. If they are always in good conditions, they can definitely prevent elephants from invading farms," the MP said.

Another solution that has been adopted to keep the pachyderms at bay is the use of natural corridors to guide them to three or four local reservoirs without passing through plantations.

"In the future, an elephant watchtower will be constructed there to help promote tourism in the province. We call all of these efforts to prevent wild elephants the "Chanthaburi Model" which I believe will be 100% effective,'' Mr Jaruk told Bangkok Post.

"With support from an ad hoc committee tackling the problem of foraging elephants, I believe that the model will be very much effective in preventing wild elephants from invading plantations, although it could take two years to be effective. Other provinces can then adopt this model to tackle the same problem."

On the political front, before the Future Forward Party (FFP) was dissolved, Mr Jaruk was one of the four FFP MPs who were about to be expelled from the party at that time for voting in favour of an emergency decree to transfer some army forces and budget to King's Guard command.

Rumour has it that he would move to many other political parties before he joined the Thai Local Power Party, known in Thai as Palang Thong Thin Thai Party, which is led by Siam Rath newspaper owner and business tycoon Chatchawal Kong-udom.

"My political principle is to work for people on all issues -- big or small. One of the big issues that I am working on right now is housing for the poor. My team and I plan to repair old houses or construct new ones for them every month with our MP salaries and budget from the Ministry of Social Development and Human Security.

"As for other groups of people across the country, I also serve them as deputy chairman of a House committee on corruption prevention and suppression. People who are in conflict with government officers, taken advantage of or prosecuted unfairly can come to me for help.

"In the next general election, my party will field candidates in all three constituencies of Chanthaburi. As the party's deputy leader, I was assigned by the party leader to be in charge of the eastern region. We aim to win at least two constituencies.

"My son will help with the party's campaign in the 3rd constituency and I will be in charge of the 1st and 2nd constituencies. We try not to be overconfident, but we can feel that the people of Chanthaburi like us because we pay attention to the small details when it comes to serving them,'' he said.

Despite being a coalition MP, Mr Jaruk admitted that he thought a weakness of this administration was the justice system.

"Democracy is a gradual process. It's not a full-fledged democracy yet [in Thailand]. There are a lot of Thai people who don't play by the rules. I suggest that those who lose keep working, doing good things for people to gain their trust and we will compete again in the next election,'' he said.

On the next cabinet reshuffle, the deputy party leader said he thinks it's time for his party leader to have a ministerial post in the cabinet.

"We want to create unity in our party for the stability of the administration," he said.

The 57-year-old MP graduated with a Master in Public Administration from Thongsook College in Bangkok. The veteran politician was with the Pheu Thai Party before switching to the now-dissolved Future Forward Party and the Thai Local Power Party.