KANCHANABURI: Thirty-three Myanmar migrants, including nine Rohingya hoping to get to Malaysia, were rounded up overnight after they crossed the border illegally in Sangkhla Buri district.

A joint military-police-civilian patrol spotted the group hiding in a forested area near the Hin Sam Kon natural crossing in tambon Nong Lu at around 11.45pm Friday. A 3-year-old girl and an 11-month old baby girl were among the 16 males and 17 females, who looked exhausted when officers found them.

All were taken to the Sangkhla Buri police station, where they received food and drinking water as they had not eaten anything for several days.

The group included four Rohingya men and five women who had travelled from Rakhine state, where the Muslim minority has faced severe persecution. They told investigators they had paid 20,000 baht each to a job broker in Myanmar to arrange work for them in Malaysia.

The other migrants told police that they had paid between 14,000 and 16,000 baht each to various brokers to arrange jobs in Ratchaburi, Nonthaburi, Pathum Thani, Nakhon Pathom and Samut Sakhon. 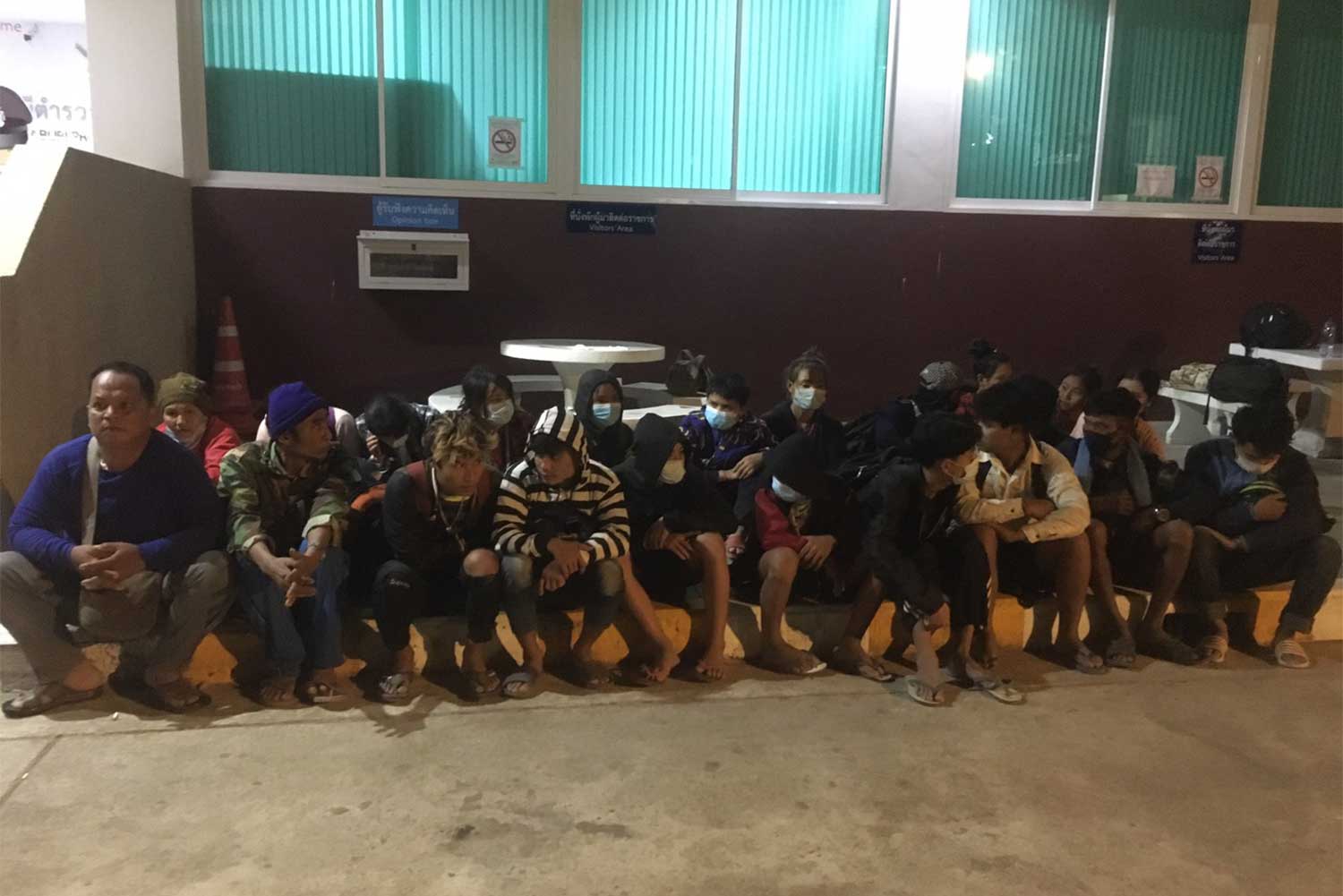 Col Chalermphol Sangtong, deputy commander of the Lat Ya task force, said the task force had received information earlier that a group of people suspected to be illegal migrants were hiding in a forested area in tambon Nong Lu.

One of the migrants who could speak Thai said his group had contacted a Myanmar job broker by phone and they were told to gather at Payatongsu, opposite Ban Phra Chedi Sam Ong on the Thai side of the border. They went there on March 2.

On Friday, the broker sent four Myanmar men, who led them through a mountainous area and across the Songkhalia River to the Thai side. They were told to wait for vehicles in the forest. Their guides then left but no vehicles were sent to pick them up.

All the migrants had their temperature checked as part of anti-Covid precautions, and the results were all normal. They were taken to Sangkhla Buri Hospital for further checks before being taken to the Sangkhla Buri police station for legal action, said Col Chalermphol.

A majority of people agree with the government's tendency to announce a special holiday to create a long holiday, such as during the Songkran festival, to help stimulate the country's sagging economy, according to a survey by Suan Dusit Rajabhat University, or Suan Dusit Poll.

AYUTTHAYA: People who visited the Central Shrimp Market in Phra Nakhon Si Ayutthaya district during March 30-April 15 are urged to get a Covid-19 test at the market on Sunday from 8.00am-2.00pm free of charge, provincial governor Panu Yaemsri announced.

The police are preparing to charge four key figures behind the political rally outside Government House on Thursday for organising a public gathering in violation of the Disease Control Act and the emergency decree, says the Metropolitan Police Bureau (MPB).