Medics perform CPR on Natcha “Nong Milk" Sawasdee, 10, a Pathom Suksa 3 student in Pak Thong Chai district, Nakhon Ratchasima, after she was hit on the head by debris from a large skyrocket. She remains in a coma, her condition critical.(Photo: Prasit Tangprasert)

NAKHON RATCHASIMA: A 10-year-old schoolgirl remained in a coma on Tuesday after being hit on the head by part of a large firework, a wooden skyrocket, launched during a cremation at a temple in Pak Thong Chai district.

Natcha “Nong Milk’’ Sawasdee, who is in Pathom Suksa 3 at Ardwitthaya School in tambon Takhu, was in critical condition in intensive care.

She was injured while waiting for her mother to pick her up at the school around 4pm on Monday.

Part of a wooden skyrocket fell from the sky onto the top of her head.

She collapsed onto the pavement, blood streaming from the injury. Bits of exploded  fireworks also hit two other students, but they escaped with minor injuries.

Teachers and parents rushed to provide first aid to the girl. Rescue workers and medics were called and performed CPR before rushing her to Pak Thong Chai Hospital. The girl was later transferred to Maharat Nakhon Ratchasima Hospital’s intensive care unit.

The injured girl's father, Nirut Sawasdee, said on Tuesday that Natcha remained in a coma. A scan showed a piece of wood from the skyrocket had penetrated about 10 centimetres into her skull, he said.

Doctors had told his family to come to terms with the fact her condition was critical.

The father said he did not want to place the blame on anyone and would let police handle legal procedures in the case. (continues below) 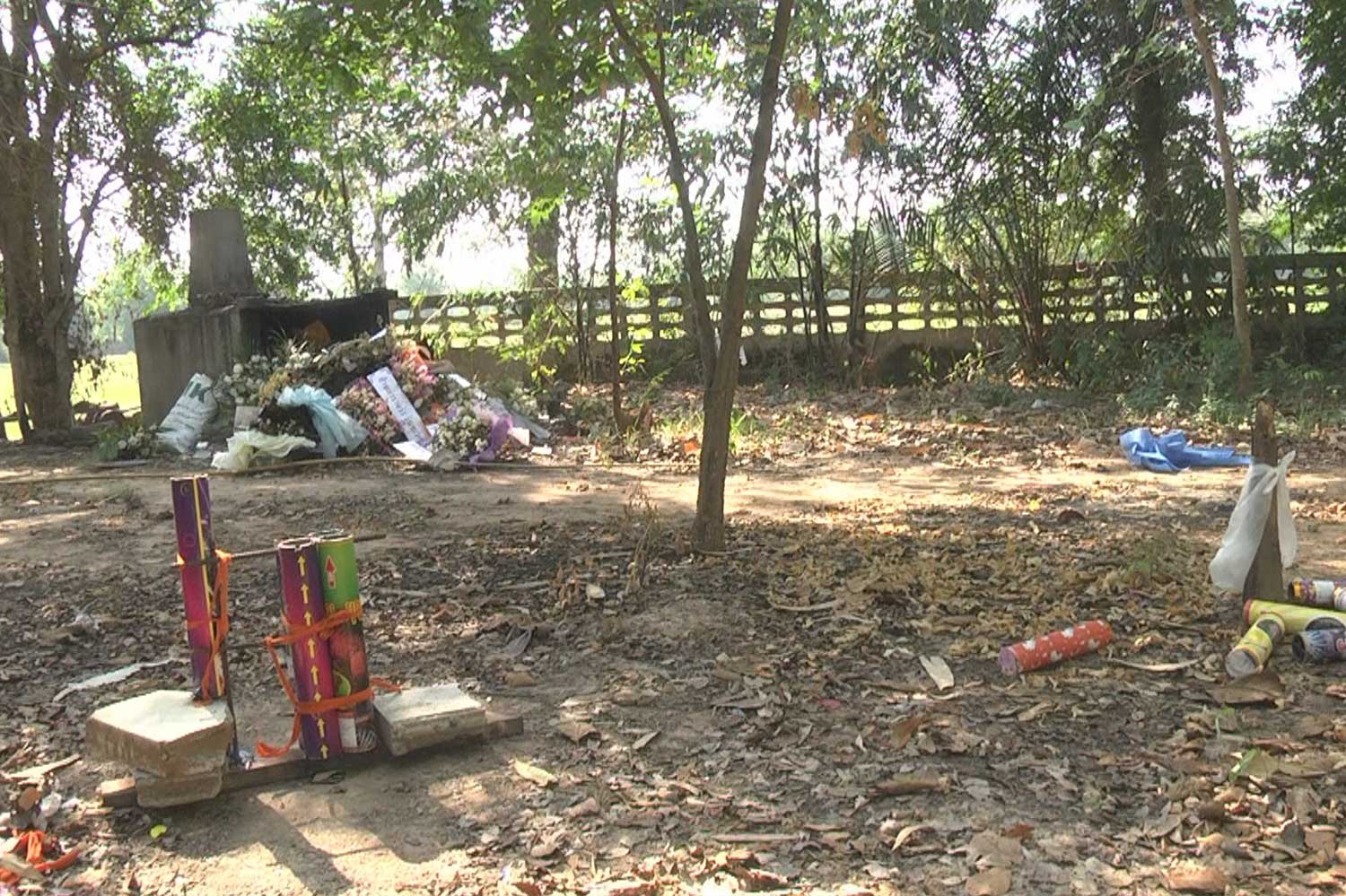 Debris from the skyrockets litters the ground near the crematorium at Wat Na Phrathat temple in Pak Thong Chai district. (Photo: Prasit Tangprasert)

The Bangkok Post reporter visited the cremation area at Wat Na Phrathat, about 50 metres from the school, and found debris from firecrackers scattered over the ground.

Local residents said firecrackers were often lit during cremation ceremonies at the temple, but they used a new type of firecracker which made loud noises and exploded, but did not  shower the area with debris.

However, on Monday afternoon firecrackers made from wood and PVC were used. The shattered wood and PVC fell to the ground after they exploded.

The pair admitted to having set off the rockets. They said they had aimed them toward nearby paddy fields, where there were no people, before they lit them.

However, it was windy at the time and pieces from the exploding firecrackers were blown back into the community, and hit the girl, they said.

Pol Lt Col Sutthirak Lakhanalikhit, deputy investigation chief at Pak Thong Chai station, said later on Tuesday that three people who lit the fireworks during the cremation had now been interrogated. They said five of the large skyrockets, made of wood and PVC, had been bought for the ceremony.

Three had been lit, took off and exploded, while two did not. The fourth rocket was later lit again, and it went off. The fifth one remained unused.

It may have ben the fourth one that injured the girl. 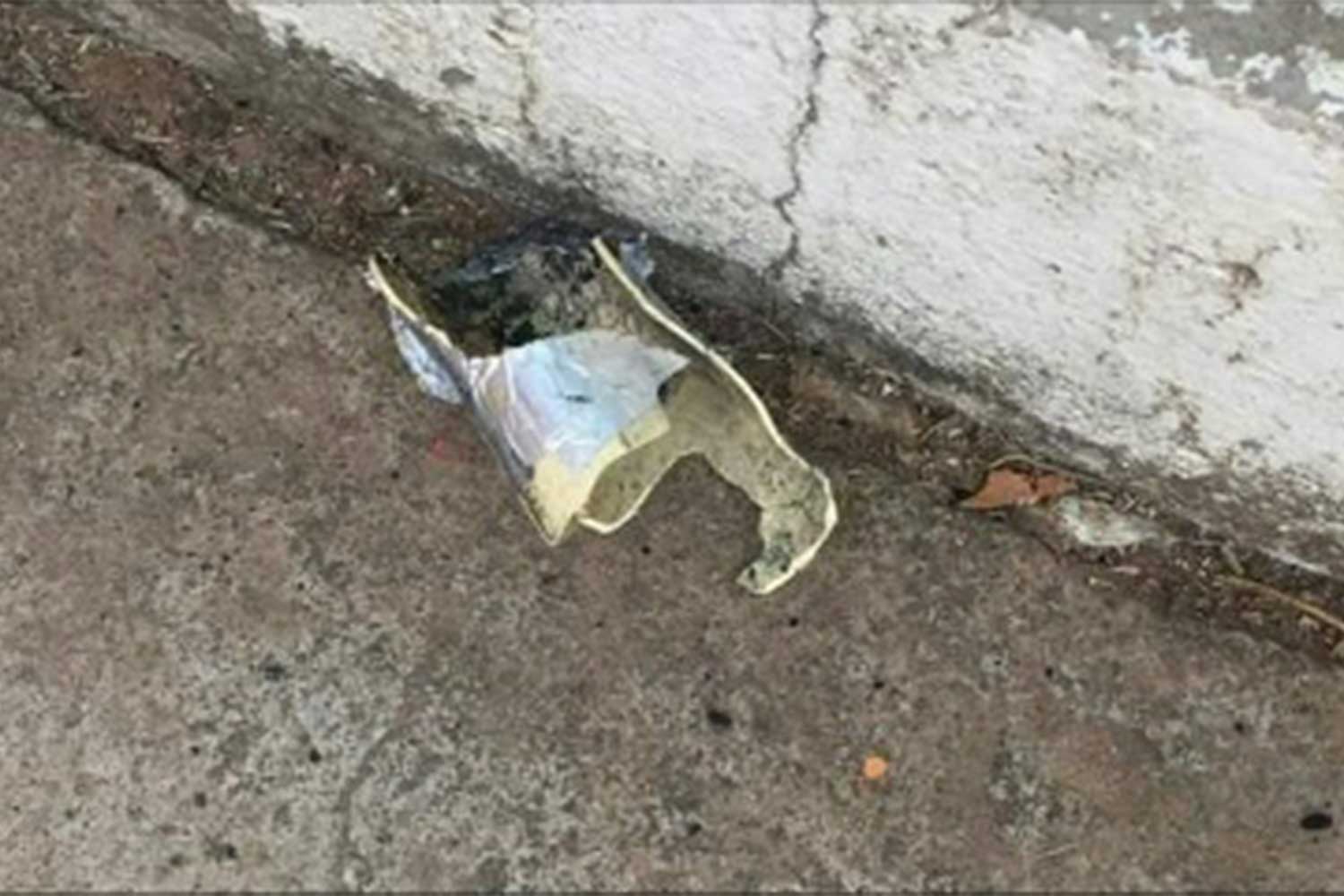 Debris from one of the exploded skyrockets. (Photo: Prasit Tangprasert)