A staff member of a wine-themed restaurant in Bangkok was accused by a job applicant of alleged physical abuse. (Capture from a clip posed on Pim Pawinee's Facebook account)

A female employee of a well-known restaurant in Bangkok – identified by Thai media as Wine Connection – lost her job after alleged physical abuse of a job applicant who then posted a video of the encounter on social media, drawing heavy criticism from netizens.

The employee allegedly squeezed the applicant's arm, pulled her ear, ripped off her face mask and then threw her out of the restaurant.

Facebook user Pim Pawinee on Tuesday posted a message and two clips of the incident during her job interview at one of the wine-themed restaurant chain's outlets.

“Today, I had an appointment for a job interview.  I earlier talked with HR, who told me I could apply for work there, but the restaurant seemed not to know about it.  A staffer there spoke rudely to me. I said I would show her a chat message (regarding the conversation with HR) via the LINE app.  But I forgot that I had left my mobile phone with my niece, who was waiting outside the restaurant.  The staffer then asked me whether I was ready to work as they worked as a team, and asked how old I was. She spoke unpleasantly (both in voice and action).  I then said I would not take the interview test. I did not want to stand there and let someone humiliate me.

“I didn’t speak in an angry way. I felt shy. Shortly afterwards, this employee squeezed my arm, pulled my ear and then removed my face mask. She pulled me out of the restaurant and threw my face mask on the floor. I then took my mobile phone back from my niece and returned to this restaurant to film the clips as shown here.

"I admit I was traumatised by her treament of me. I am just a university student wanting to gain work experience. What I experienced makes me scared of applying for jobs. I have worked at three or four places before, but have never encountered anything like this,’’ wrote the job applicant.

She did not name the restaurant. Her clips showed an employee in a red T-shirt who allegedly treated her badly.

Wine Connection Thailand on Wednesday posted an announcement on its Facebook page that the company had learned about the incident and the inappropriate action of its employee. The firm found her action unacceptable and terminated her employment. 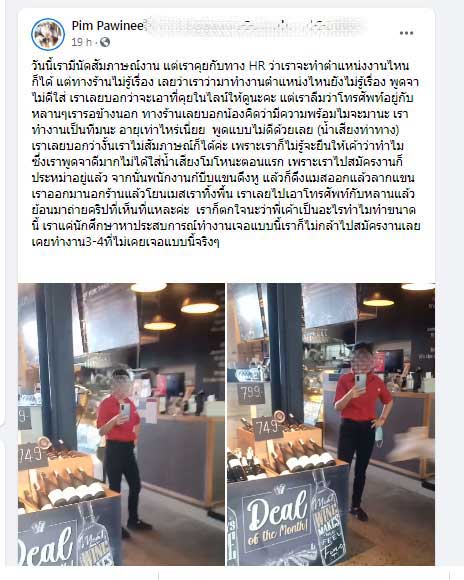 A Facebook user posted a story and two clips accusing a staff member of a well-known restaurant in Bangkok of abusing her during a job application.  (Photos taken from Pim Pawinee's Facebook account)