Old city walkway to get a facelift
Thailand
General

Old city walkway to get a facelift

Greener and safer: Bangkok Metropolitan Administration is spending 260 million baht on a facelift for an elevated walkway running from Sarasin intersection near Lumphini Park and Benjakitti Park in Klong Toey district.

Communities near an elevated walkway on Witthayu Road appear optimistic about City Hall's plan to spend about 260 million baht on redesigning a two-decade old, 1.3-kilometre bridge into the so-called Bangkok Green Bridge.

Chiraphat Chai-amphon, a resident of Polo community, said he didn't really care if this project was intended to woo voters or not as he fully supports the project as long as it is implemented properly.

"Shortly after the bridge had been cleaned up and repainted, I had observed a significant drop in the rate of criminal incidents," he said in a public consultation event organised last Friday, one of a series of such events that Bangkok Metropolitan Administration (BMA) and its network has launched in the past few years on the Bangkok Green Bridge project.

On Friday, residents of three communities were invited to voice their opinion on the design. Most attending that day were elder residents of Soi Polo, on Wireless Road.

Narirat Phiriyananthaichai, a 71-year-old Muslim woman in the Polo community, said she and several other residents were now too old to climb the steep staircase to use the elevated walkway.

However the regulation of space underneath and around the bridge will benefit her and the rest in the community, she said.

"At least, these old people will feel safe to take a walk in the morning and the evening near the bridge," she said, adding that none of them had dared do so in the past because they were afraid of getting robbed as the place is isolated.

Anurot Kammit, a resident in Soi Ruamrudee, said people living in communities nearby were allowed to give their views on the project's design, which she appreciated.

"I proposed that they build a number of toilets on the bridge to also ban dogs to keep the bridge clean and to also have the bridge opened and closed at certain times to prevent gangs moving in," he said.

Now serving as a pedestrian walkway and bicycle lane, the Green Bridge -- linking Sarasin intersection near Lumphini Park and Benjakitti Park in Klong Toey district -- will, when it is turned into the Bangkok Green Bridge, double as a new elevated park and become a new city landmark. 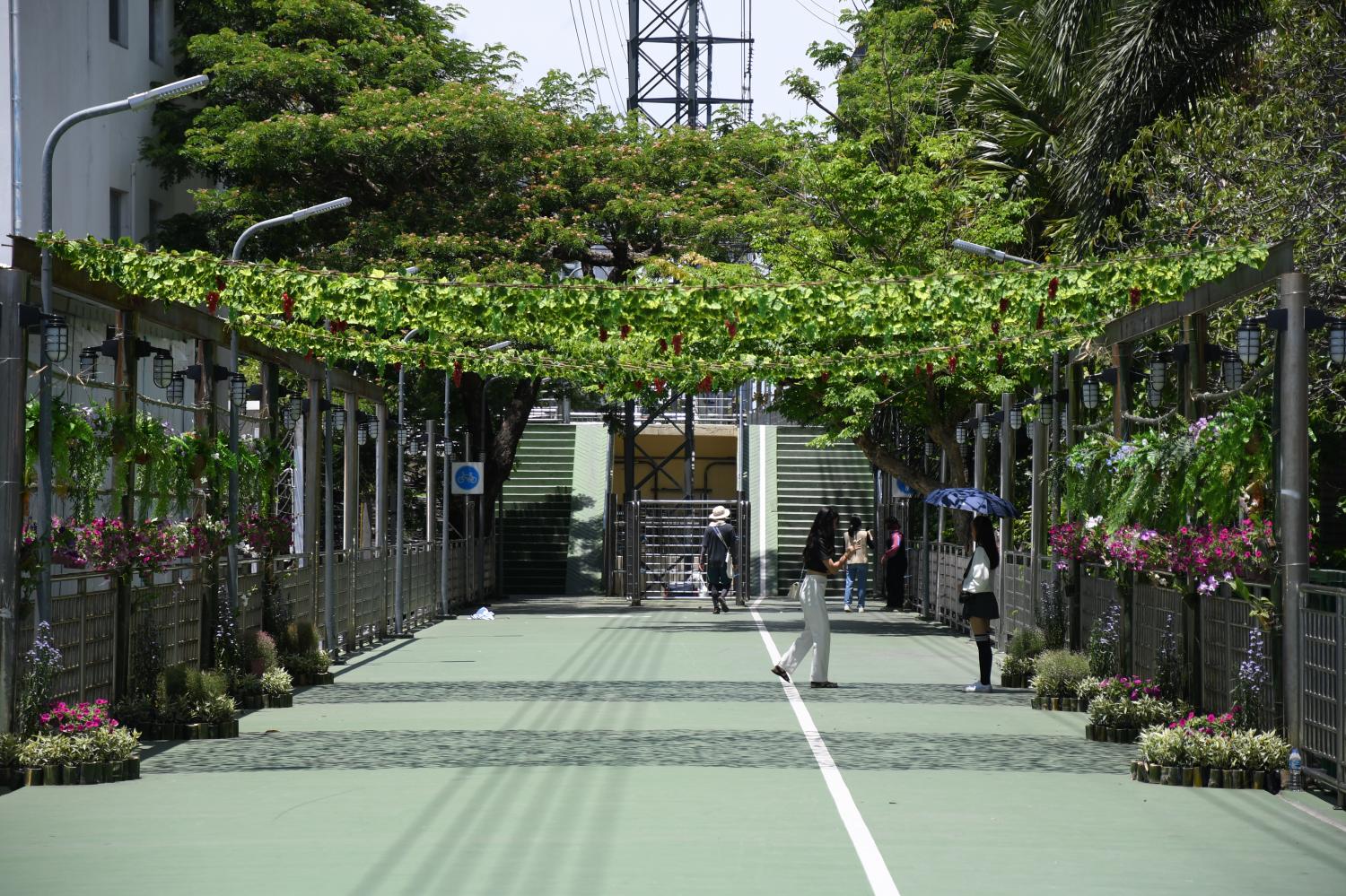 The park is the combined effort of the Urban Design and Development Centre-Centre of Excellence in Urban Strategies (UDDC-CEUS), Atom Design, Landscape Collaboration, Studio Taila and Lighting Research and Innovation Centre (LRIC) at King Mongkut's University of Technology, Thonburi.

The construction will take about 200 days, said deputy Bangkok governor Sakchai Boonma, who visited the project site on Friday. "What the BMA is focusing on isn't only the bridge itself, but also the landscape along its sides," he said.

"We aim to add more green space to the surrounding areas and to make the water in those canals cleaner to attract visitors and stimulate the local economy [through tourism]," he said.

Three communities that will likely benefit in terms of tourism-based economic stimulation are Soi Polo, Soi Ruamrudee and Mahathai Church, which together have around 2,000 households, he said.

The bridge's width will be expanded to between 3 and 7.59 metres, he said.

Three scenic points will be built and lighting and security cameras will be installed.

This was done as part of the BMA's efforts to improve the security along the elevated bridge, he said.

First built over two decades ago during the tenure of Bhichit Rattakul as Bangkok governor, the walkway is now a crime-prone area, due to its isolation.

Its supporting structures have become dilapidated, and in the past two decades the BMA has only given it two minor facelifts.

Old and untidy stalls built underneath the elevated walkway will be cleaned up and connected with activity grounds in nearby communities, he said. 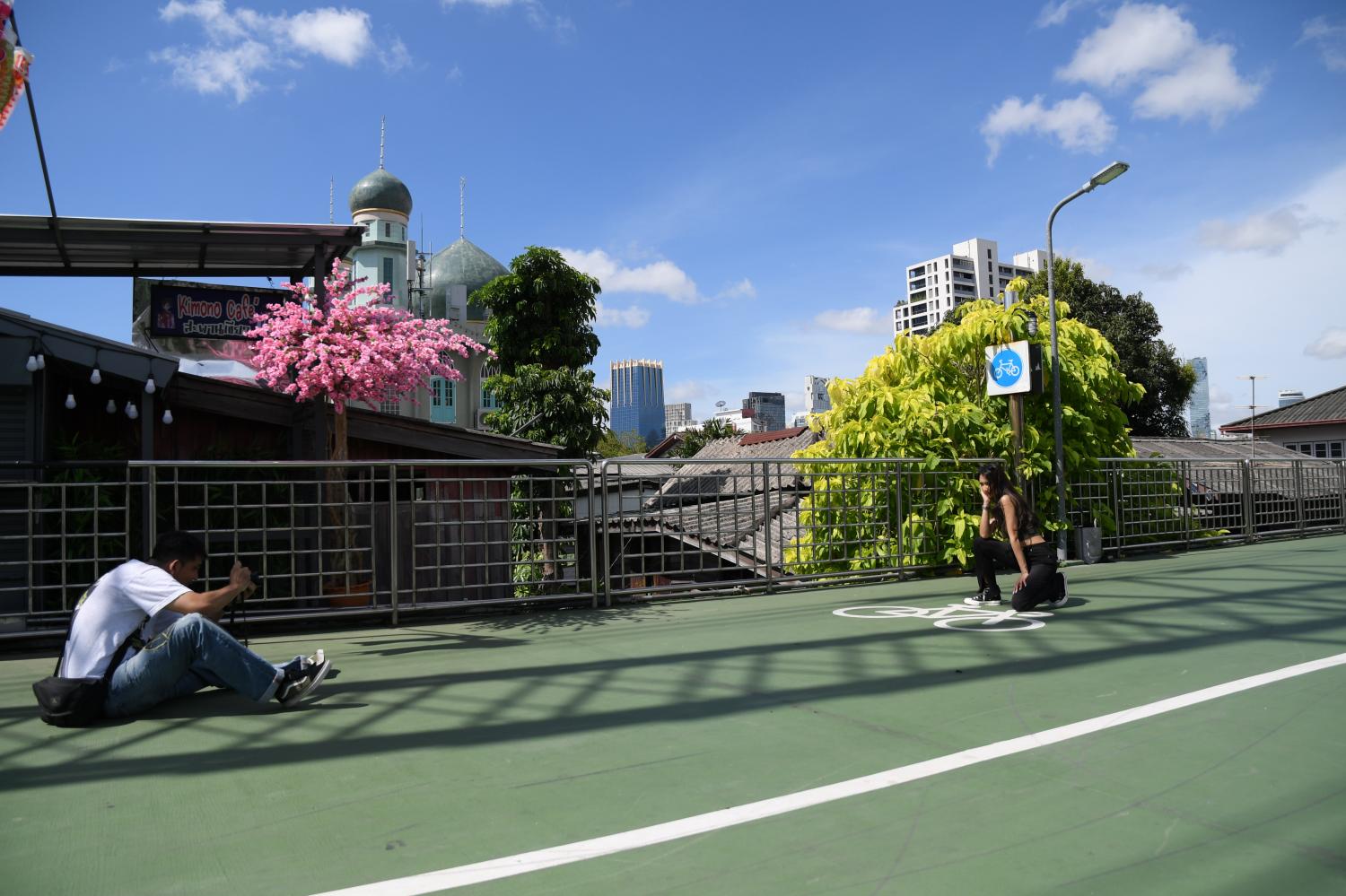