Entertainment venues in three Bangkok districts have been ordered closed from April 6-19 to contain the spread of Covid-19, city governor Aswin Kwanmuang announced on Monday.

The decision to temporarily close the venues in Klong Toey, Watthana and Bang Khae was reached at the Bangkok's communicable disease committee on Monday evening.

If the disease spreads to other districts, the affected establishments will also be shut. "We're monitoring the situation," the governor said.

The closure affects 196 entertainment establishments in the three districts, he added.

Closing hours will be brought forward from 11pm to 9pm with a ban on the sale of alcohol.

Department of Disease Control (DDC) director-general Opas Karnkawinpong said the number of Covid-19 infections is expected to rise after new clusters of infections were detected in a Narathiwat prison and Bangkok bars.

In light of this, the meeting of the Emergency Operation Centre (EOC) on Monday agreed that Bangkok, Pathum Thani, Nonthaburi, Samut Prakan, and Nakhon Pathom will be designated as red zones under maximum control.

Entertainment venues can open until 9pm. Customers will be allowed to eat in but no alcohol consumption will be permitted.

Department stores and shopping malls can still operate as usual, under health and safety protocols. Schools and education institutes will remain open.

The proposals will be presented for consideration by the subcommittee of the Centre for Covid-19 Situation Administration (CCSA) on Wednesday. The new restrictions will be enforced for two weeks and they will then be assessed, Dr Opas said.

After fewer cases were reported, Covid-19 infections on Sunday made a comeback in the capital as health authorities said cases linked to the entertainment cluster had risen to 71, according to the DDC.

The cluster is thought to have originated at an entertainment venue in Pathum Thani province before spreading to others in Thong Lor and Ekamai in Bangkok. 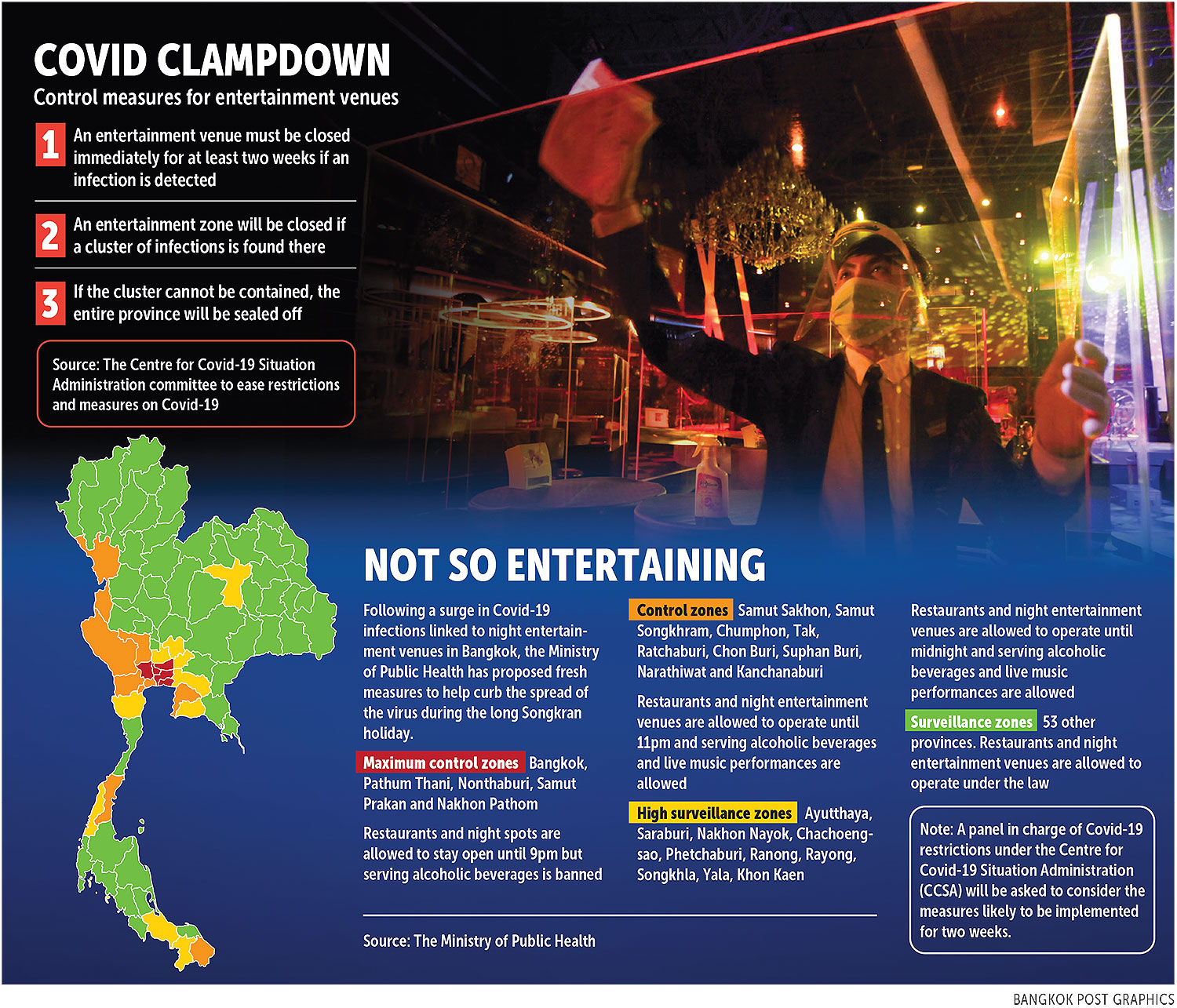 "Employees were the conduits as they contracted the disease from customers and then spread it to others. Most patrons also visited more than one place and musicians and employees working at entertainment places tend to work multiple jobs, accelerating the spread," Dr Opas said.

He identified risky behaviour such as not wearing masks, shouting, drinking -- which led to poor judgement -- and sharing glasses.

An entertainment venue will be closed immediately for two weeks if an infection is detected on the premises. If infections cover a large zone of entertainment venues and cannot be contained, provincial authorities will have authority to close the zone or seal off the entire province, Dr Apisamai said.

The measures will be submitted to the CCSA for endorsement, she said.

Even though no infection clusters have been found at eateries, patrons from entertainment venues visited them and ate with their relatives. Therefore, operators of these premises have been urged to strictly follow disease control measures, particularly during Songkran, Dr Apisamai said.

Gen Natthapon Nakpanich, chief of the Covid-19 operations centre under the CCSA, denied reports that a curfew would be imposed to curb the new cluster in Bangkok.

He said selective containment measures will be adopted to deal with each particular area affected by infections, rather than using comprehensive measures that will have an impact on people who live outside those areas.

The Public Health Ministry on Monday also provided details about the new hotspot among inmates and warders at a Narathiwat prison.

It said that like the cluster at the Immigration Bureau's detention facility, the prison was a crowded, enclosed space and the risk of the virus spreading to the public was limited.

The CCSA on Monday recorded 194 new cases of Covid-19 as the accumulated total since the start of the pandemic hit 29,321.

No new deaths were reported, leaving the toll at 95.