A Covid-19 surge in Chiang Mai is considered to be a red alert after this northern province on Monday recorded an additional 269 Covid-19 cases, mostly related to nightspots, prompting provincial authorities to expand facilities at the field hospital. 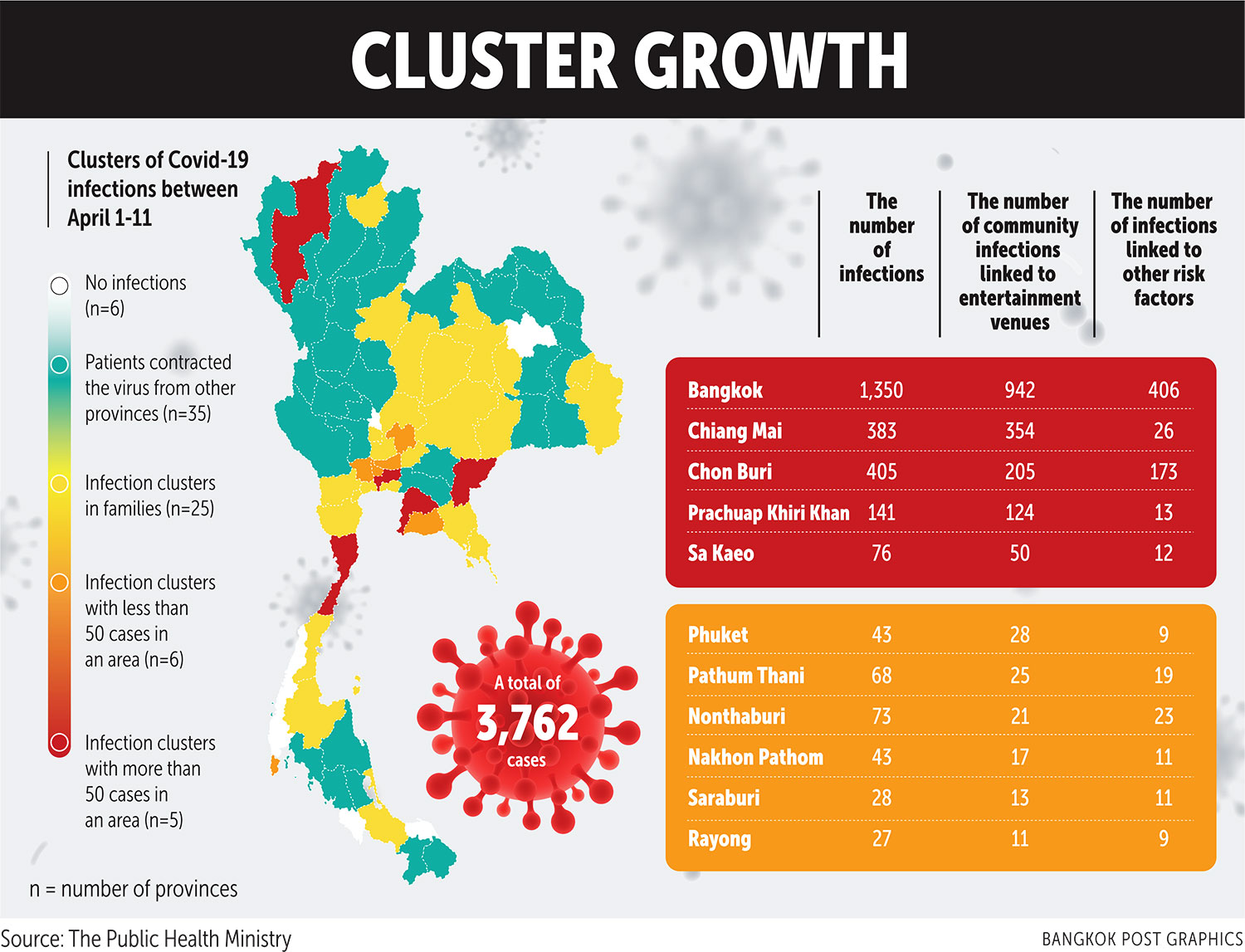 The number of at-risk people in Chiang Mai is estimated at about 5,000-6,000, according to its governor.

The 985 new infections reported by the Centre for Covid-19 Situation Administration (CCSA) is the highest daily tally since the pandemic began and raises the accumulated total to 33,610. All but five were transmitted inside Thailand. No further deaths were reported, leaving the toll at 97.

The Chiang Mai figures included a large cluster found in the province on Sunday afternoon. Nevertheless, in terms of cumulative positive test results this month, Chiang Mai -- with 629 cases -- still lags behind Bangkok, which accounted for 1,431 cases over the same period.

Department of Disease Control director-general Opas Karnkawinpong said the figures they report following the Songkran holiday period will define the direction the Covid-19 infection rate is heading during this third wave. "The trend is still upward. We will have to look at the figures after Songkran," Dr Opas said.

He said most new cases were still linked to nightspots and warned the ongoing university summer break could prompt another surge if students lower their guard.

Dr Opas said this new round of infections is unique as it is predominately striking younger members of society. "The transmissions in Chiang Mai were linked with university students who, after their examinations, went to pubs to let their hair down or engaged in other activities which contributed to the wider spread of the virus,'' Dr Opas said.

Chiang Mai governor Charoenrit Sa-nguansat said the key to preventing large clusters forming was to identify and isolate those at most risk as quickly as possible. ''The number of at-risk people is estimated at about 5,000-6,000, prompting the need to increase testing units to meet the demand,'' the governor said.

Mr Charoenrit said the provincial communicable disease committee will meet to assess the situation and will arrange for field hospitals to be set up to accommodate an expected surge of new patients and need for extensive testing.

He added that almost 100 students and personnel at Chiang Mai University were confirmed to be infected and the university was moving them from field hospitals to the university's premises where they will be looked after. ''The situation is critical. Therefore, the provincial communicable disease committee must take all measures to control the spread of the disease as quickly as possible,'' the governor said.

Even so, the province has asked SCG for additional beds because public health officials estimated that at least 2,000 will be needed given the rising number of people who are undergoing testing now. Meanwhile, the atmosphere in Chiang Mai on the eve of the Songkran festival was quiet yesterday as most people stayed at home to avoid the risk of infection.