Phuket International Airport, April 12, 2021. Phuket, one of Thailand's top tourist havens, had an ambitious plan to reopen to the world this summer. But with a spike in cases, the island's desperate situation is unlikely to end anytime soon. (Adam Dean/The New York Times)

PHUKET: Around the corner from the teeth-whitening clinic and the tattoo parlour with offerings in Russian, Hebrew and Chinese, near the outdoor eatery with fried rice meant to fuel sunburned tourists or tired go-go dancers, the Hooters sign has lost its H.

Like so much at Patong Beach, the sleazy epicentre of sybaritic Thailand, Hooters is “temporarily closed”. Other establishments around the beach, on Phuket Island, are more firmly shuttered, their metal grills and padlocks rusted or their contents ripped out, down to the fixtures, leaving only the carcasses of a tourism industry ravaged by the coronavirus epidemic.

The sun, which usually draws 15 million people to Phuket each year, stays unforgiving in a downturn. The rays bleach “For Rent” signs on secluded villas and scorch greens on untended golf courses. They lay bare the emptiness of Patong streets where tuk-tuk drivers once prowled, doubling as touts for snorkelling trips or peep shows or Thai massages.

Only a few weeks ago, Phuket seemed poised for a comeback. After a year of practically no foreign tourists arriving in Thailand, the national government decided that Phuket would start welcoming vaccinated visitors in July, without requiring them to go through quarantine. The project was called Phuket Sandbox.

But the country is now gripped by its worst Covid-19 outbreak since the pandemic began, spread in part by well-heeled Thais who partied in Phuket and Bangkok with no social distancing. The confirmed daily caseload — albeit low by global standards — has increased from 26 on April 1 to more than 2,000 three weeks later in a country that had about 4,000 total cases in early December.

For months, Thailand’s strict quarantines, lockdowns, border vigilance and rigorous use of masks kept the virus at bay, although the economy suffered. But even as the past couple of weeks have brought repeated daily caseload highs, the government is reacting slowly.

“Whatever happens, happens,” he said.

Desperate to resuscitate its tourism sector, Phuket, which had shut its airport during a Covid spike last year, continued to allow people in this spring on domestic flights, even as cases reached record highs. Only Thursday did authorities start requiring Covid-19 screening for those arriving on the island.

“If you ask me how optimistic I am, I cannot say,” said Nanthasiri Ronnasiri, director of the tourism authority’s Phuket office. “The situation changes all the time.” 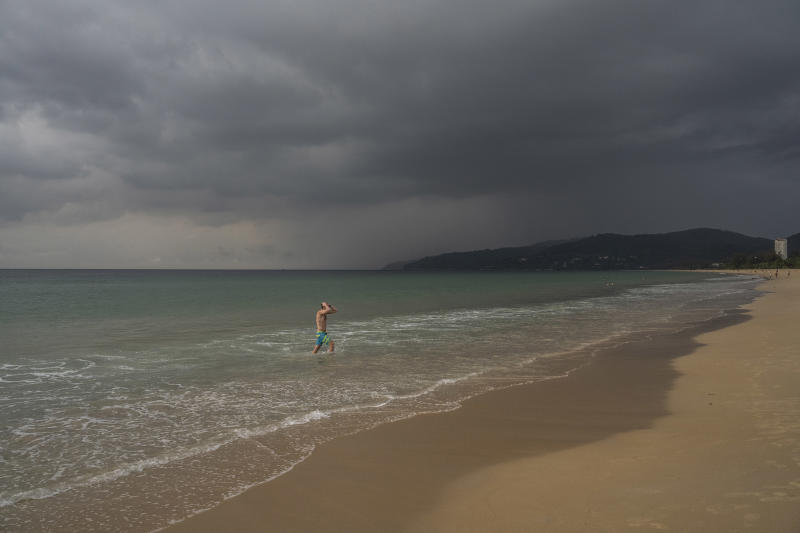 On April 18, Tourism and Sports Minister Phiphat Ratchakitprakarn acknowledged that a July 1 opening for Phuket looked unlikely given that the plan depended on Covid being squelched in Thailand. Deputy Prime Minister and Commerce Minister Jurin Laksanawisit said on Sunday he admitted the current infection rate is threatening the reopening but doubled down on the target, stressing the government would try by all means to see the first foreign arrivals set foot on the island on July 1.

To prepare for Phuket Sandbox, the government funnelled many of its limited number of vaccines to the island, in hopes of achieving herd immunity by the summer. As of mid-April, more than 20% of Phuket’s residents had been vaccinated. Nationwide, only about 1% of the population has received the needed doses.

“I am very relieved,” said Suttirak Chaisawat, a grocery store worker who received his Sinovac vaccine this month at a resort repurposed for mass inoculations. “We all need some hope for Phuket.”

While the vaccinations may have given Mr Suttirak some optimism, the present picture remains grim.

Normally at this time of year, Patong Beach’s golden sands would be heaving with foreign holidaymakers.

But the beach is now almost deserted, save for a clutch of residents lining up for Covid tests at a mobile medical unit. Up the road, a monitor lizard, a creature more crocodile than newt, lumbered across the tarmac, with little traffic to impede its crossing.

Phuket’s half-built condominium complexes are being reclaimed by nature — always a battle in the tropics but a lost cause when developer money dries up. Billboards for “Exclusive Dream Holiday Home” are stained by mildew and monsoon mud.

The Songkran period this month was supposed to be a dress rehearsal for Phuket’s revival. Rather than foreign backpackers or business conference attendees, hotels tried to lure high-end Thai tourists who, were it not for the pandemic, might have decamped overseas for skiing in Hokkaido, Japan, or shopping in Paris.

But instead of prepping the island for its return as a global tourist haven, the Thai New Year may have wrecked the island’s chances for a July reopening.

At festivals in Patong and at other beaches this month, thousands of affluent Thais partied, fewer masks in evidence than bikini tops. For some in Thailand’s high society, Covid was seen as something that might infect vegetable sellers or shrimp peelers, not the jet set.

But then these beach revellers started testing positive, the virus spreading from luxe Bangkok nightclubs to Phuket.

The virus’s resurgence after so many months of economic hardship is shattering for the majority of Phuket’s residents, who depend on foreign tourists for their livelihoods.

As a 3-year-old elephant munched on sugar cane nearby, Jaturaphit Jandarot swung slowly in his hammock. There was little else to do.

Before the pandemic, he and the other elephant handlers on the outskirts of Patong used to lead more than 100 tourists a day, mostly from China, on 30-minute rides. Now there are no visitors.

“I was superexcited to hear they are going to open Phuket for foreign tourists,” Mr Jaturaphit said. “Thai people don’t ride elephants.”

Whatever the state of international travel, the elephants still need to be fed. Each month, a dozen beasts consume at least 60,000 baht worth of sugar cane, pineapples and bananas. The 3-year-old, little more than a toddler in elephant years, eats as much as the adults. 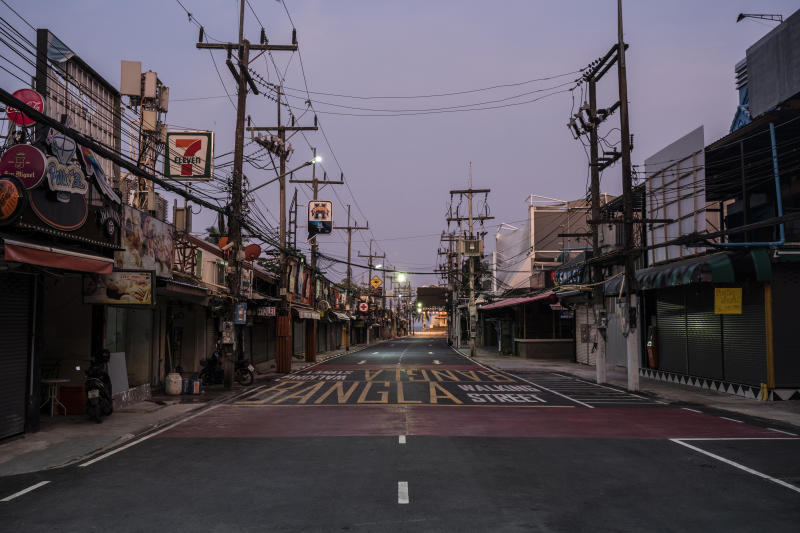 Bars and nightclubs at Patong Beach that have been ordered closed because of a recent Covid-19 outbreak, April 11, 2021.

After Phuket’s tin and rubber industries declined, tourism grew from a few bungalows on Patong Beach in the 1970s to a global phenomenon, attracting golfers, clubbers, yachters, sex tourists and Scandinavian snow birds.

Much of Phuket’s high-end accommodation is clustered near the beach town of Bang Tao, a placid Muslim-majority community where placards for upscale wine bars mix with Arabic signs for Islamic schools.

Phuket’s largest mosque is in Bang Tao, and this year the first day of Ramadan coincided with the beginning of the Songkran festivities, an auspicious augur after a year of economic hardship. The night before fasting was to begin, worshippers streamed to the mosque. Women chopped shrimp, banana flowers and armfuls of herbs for the feasting to come.

But at the last minute, Phuket authorities called off mass prayers for fear of the virus’s spread. Iftar, the breaking of the fast, is taking place in homes, not at the mosque.

As authorities traced Covid-19 cases on the island to the upscale beach parties, residents of Bang Tao grew frustrated.

“We want to welcome people to Phuket, of course, but when they don’t protect themselves and they bring Covid here, I’m a little bit angry,” said Huda Panan, a primary schoolteacher who lives behind the mosque.

Ms Huda’s husband is a taxi driver, but he has not worked for more than a year. Most of the mosque’s community depended on tourism, working as concierges, cleaners, landscapers and water-sports guides. Now some locals sell dried fish and scavenge the hills for a fruit used to add pucker to a local curry — whatever they can do to survive.

On occasion, Buddhist temples, churches and mosques in Phuket distribute meals to the hungry. Lines are long. The food runs out.

“We can wait a little longer for Phuket to get better,” Ms Huda said in the heat of the day as the daily fast grew long. “But not much more.”