A lonely death, through the eyes of his friend
Thailand
General

A lonely death, through the eyes of his friend

For a friend, it was traumatic to learn of Ek's suffering while waiting for the result of a Covid-19 test. But it was heart-breaking to know the wait had killed the man who died a lonely death.

Ek, 45, returned to his home province of Nong Khai where he spent his Songkran holiday with family in the middle of this month.

Sometime after flying back to Bangkok on April 15, Ek was told a relative he met during Songkran had tested positive for the virus.

Ek's close contact with the relative placed him in a high-risk group. He immediately went for a test which revealed he was free of Covid-19 although he would need a second test. He tried, in vain, to book an appointment at a major state-run hospital on April 20.

His friend, Bew, said Ek handed the hospital a doctor's letter he received from the first test which rated his risk of contracting the virus as high.

The hospital told Ek it only had capacity to test 20 people per day and advised him to go early to secure an appointment. The next day, he showed up at the hospital at 5.30am only to learn the appointment slots for that day had already been filled. A nurse said he might have better luck next time.

Ek returned to his condo feeling unwell. He was tired and began to cough. He bought over-the-counter medicine to relieve his condition and went into isolation in his room. Seeing the wait was too long at the hospital, Ek opted to apply online for the test at one of the venues run by the Social Security Office in Bangkok. 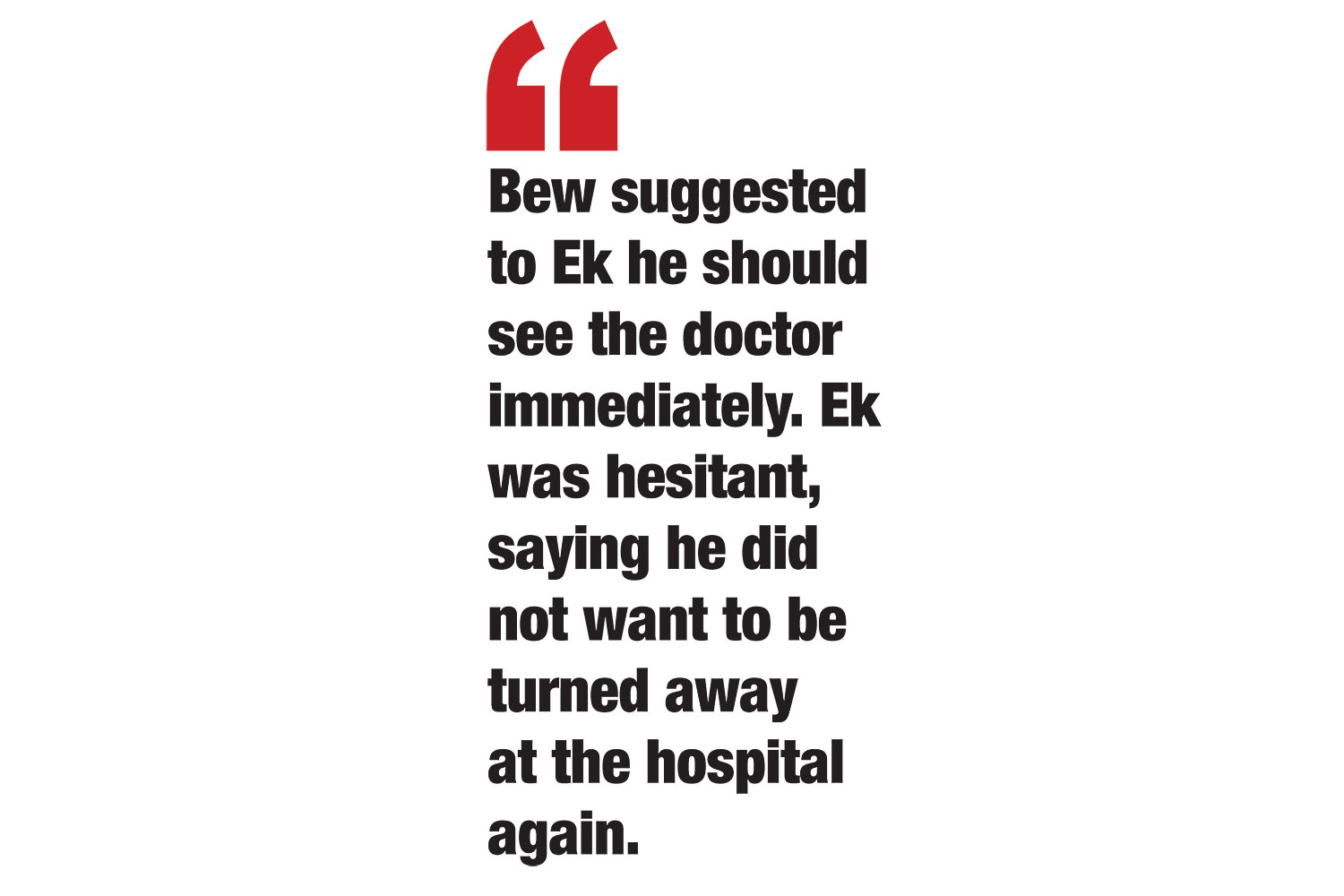 Because he registered for his social security in Nong Khai, the provincial security office later called him and promised to arrange for him to be tested at a venue in Bangkok.

On April 24, the office confirmed it had put Ek down for a Covid test appointment on April 27, according to Bew. By this time, Ek's health was deteriorating.

"But he insisted on going for the test on April 27 to avoid a long queue. Ek told me on the phone that he had no fever, only a cough. He said he was still 'hanging in there,' " Bew said.

Ek said he wouldn't be able to answer phone calls too often as he was exhausted. He also rarely replied to messages on his Line chat app.

Bew suggested to Ek he should see the doctor immediately. Ek was hesitant, saying he did not want to be turned away at the hospital again.

During what would be the last phone conversation between two friends, Ek told Bew he had to stay strong as the April 27 test appointment was only a day away. However, Ek's voice was growing weak and his speech disoriented.

Alarmed by his friend's worsening condition, Bew got in touch with a receptionist at Ek's condo who alerted the 1669 Covid-19 hotline.

A hotline officer insisted on talking to the sick person or his immediate family member to decide whether his condition was serious enough to send for an ambulance to pick him up.

Bew then called the Nong Khai social security office which said it could not help because the case was being handled by the Bangkok office. He then contacted the 1330 hotline which said it would serve only confirmed Covid-19 cases. In the meantime, Ek texted Bew, saying he was mustering the energy to stay strong.

Rescuers went to Ek's condo at 10am on Monday and forced their way into his room, where they found him unconscious. Attempts to revive him were futile. He died there soon afterwards.

His body was left in the room for eight hours pending a post-mortem. Doctors said he died of heart failure but his family believes it was Covid-19 that took his life.