The online Covid-19 vaccination booking platform was severely strained and crashed briefly on its first day due to overwhelming demand.

Taweesilp Visanuyothin, the spokesman for the Centre for Covid-19 Situation Administration (CCSA), acknowledged the problem but said the system was the responsibility of the ministry.

“The [Mor Prom] Line OA is simply one of the registration channels. Today is the first day and is not the last. There are several other days people can register,” he said.

He suggested two other channels — through their local hospitals and through village health volunteers.

He apologised on behalf of the team and said there was still one month to prepare the database for vaccinations, which will begin on a large scale in June.

“If it’s not possible today, try again tomorrow. All eligible people should register and the data will be compared with the database in their areas. If all goes well, they can get the shots,” Dr Taweesilp said.

The new campaign, the second of the three-phase vaccination programme, targets people aged 60 or more and those with seven existing health conditions. The shots will be given in June and July.

The vaccine used in this phase is made by AstraZeneca since CoronaVac shots by China-based Sinovac Biotech, the other option Thailand has now, have not been tested on people aged 60 or more.

The first phase of the vaccination programme now under way involves health workers and frontline staff who are getting both AstraZeneca and Sinovac shots based on their age.

The third phase will target 31 million aged 18-59 who will receive both Sinovac and AstraZeneca vaccines from August onward.

The government aims to vaccinate 50 million people, or 70% of the population, by the end of this year through collaboration with 1,100 public and private hospitals. They have a combined capacity to administer 500,000 shots a day or at least 10 million a month.

The numbers do not include joint efforts by health promotion hospitals in all tambons and stations prepared by the private sector, including those at shopping centres.

The Line OA allows registrants to choose booking times and places for themselves and other eligible people who do not have access to the online channel.

As of now, the interface of the Line OA and the mobile app for iOS and Android is Thai-only and accepts only Thai national ID numbers to register. However, foreigners who hold a so-called pink ID card, which includes a Thai ID number, can use the platform.

The government has said that all people residing in the country — including migrant workers and expats — would be vaccinated for free. It remains to be seen whether an English interface or other languages will be added, or whether other identification such as a passport number will be accepted.

Failing that, foreigners could be asked to register through the other two channels — hospitals they use, medical facilities close to them or tambon hospitals; and village health volunteerss.

According to Mor Prom Facebook, 280,050 people registered to get the shots as of 4.30pm on Saturday. 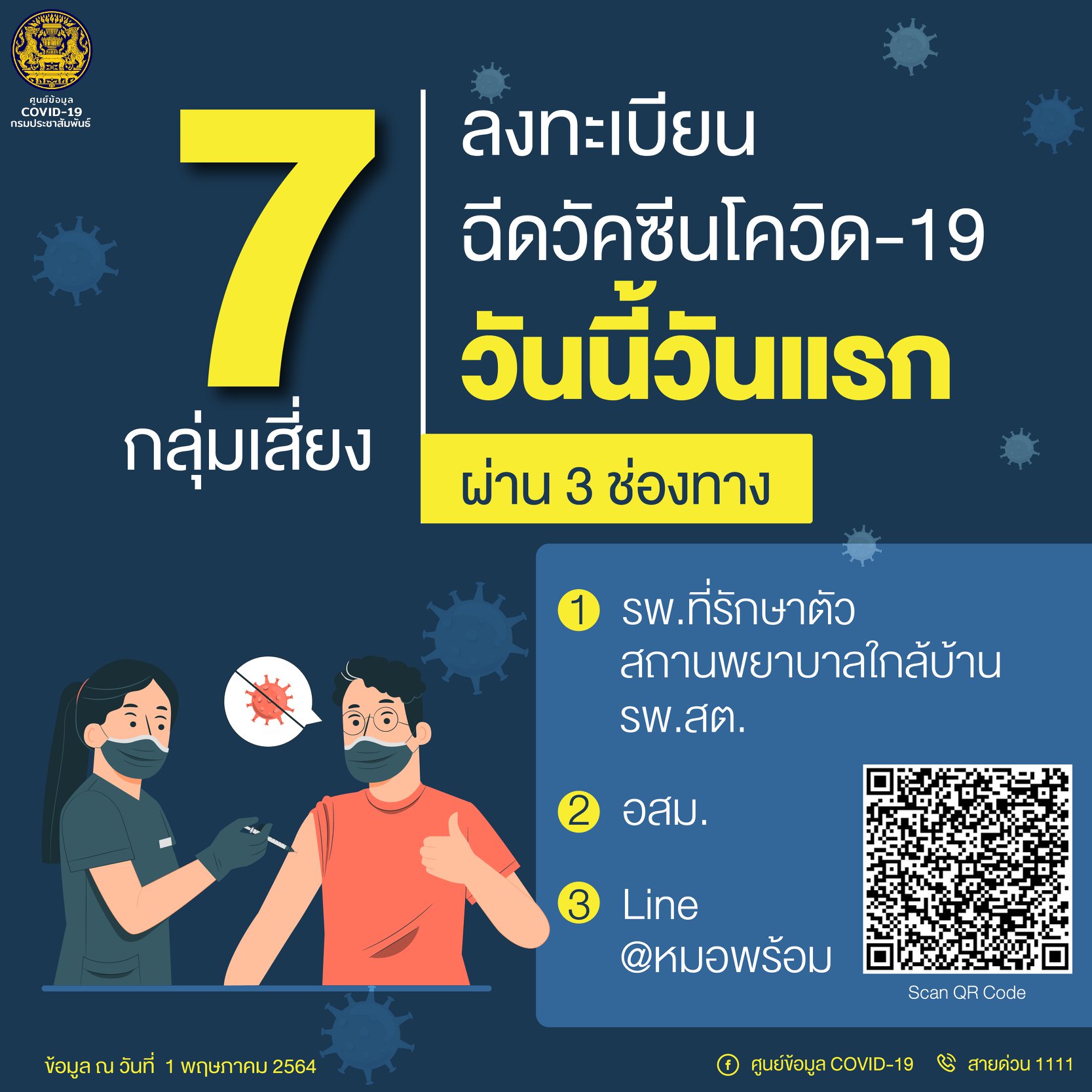