Bangkok's slum district of Klong Toey, where a surge in Covid-19 infections has sparked fears of it becoming a super-spreader hub. (Photo by Wichan Charoenkiatpakul)

The Covid-19 infection cluster in the slum community of Bangkok's Klong Toey district has prompted the government to speed up its vaccination rollout there amid fears it could overwhelm the public health system if left unchecked.

The cluster has sparked concerns about a widespread transmission because thousands of people live in the tightly packed residential area, many of them commuting across Bangkok and to nearby provinces. 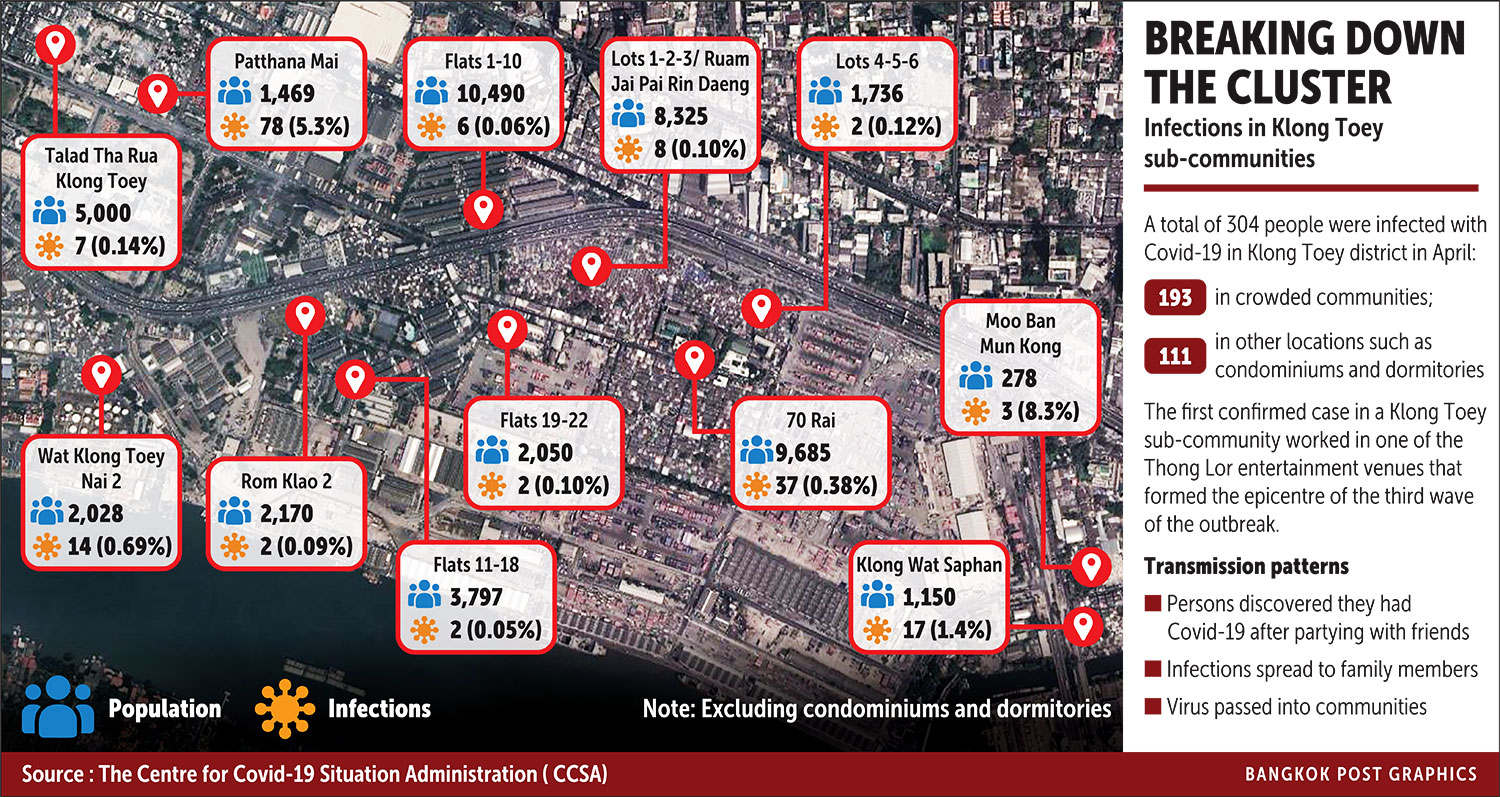 The vaccination will begin at Tesco Lotus hypermarket's Rama IV branch and Klong Toey Withaya School at 1pm on Tuesday, Pol Gen Aswin said. About 1,000 people are expected to be inoculated by the end of the day and a further 2,000-3,000 in the coming days.

Proactive mass testing will also be conducted on 1,000 people in the Klong Toey communities every day from Tuesday until May 19. By that time, about 20,000 out of 85,000-90,000 community residents are expected to have been tested, the governor said.

He admitted that it would be more difficult to seal off the Klong Toey communities than the previous infection cluster in Samut Sakhon, which covered only a limited area and had a smaller population.

Of the communities' 304 infected people as of Monday, 193 lived in crowded and dense areas, Dr Apisamai said, prompting the need to step up disease surveillance to prevent further transmissions.

All the infected people have now been treated in hospitals, she said, identifying the three Klong Toey communities with the highest number of infections as Patthana Mai, 70 Rai and the community near Klong Wat Saphan.

She added that almost 1,000 people were considered to be at high risk of catching the virus and would be prioritised in the testing.

Dr Apisamai said the CCSA meeting also discussed the situation in the Bon Kai community in Pathumwan district where 60 new cases were confirmed. Mass testing will be conducted there with an aim to test 4,000 people per day, she said.

A spokesman for the Bangkok Metropolitan Administration (BMA), Pongsakorn Kwanmuang, said on Monday that an investigation had found that the area's infection cluster originated with someone who lived locally and worked at a night entertainment venue in Thong Lor.

The Klong Toey cluster mostly involved the virus spreading among family members and work colleagues, Pol Capt Pongsakorn said, adding that there were about 75,000 houses in the Klong Toey slums, and mass testing must be accelerated.

Lt Gen Kongcheep Tantravanich, spokesman for the Defence Ministry, said officials had asked the Port Authority of Thailand (PAT) to convert its futsal stadium, known as Kodang Stadium, into a field hospital to accommodate infected patients from Klong Toey.

On April 30, the Defence Ministry wrote to the PAT director to ask him to turn the futsal stadium into a field hospital, saying that Gen Prayut was worried about a new surge of infections in Bangkok's slums.

"Klong Toey and nearby communities are large, crowded and densely populated," the letter said. "If infected people cannot be brought into the healthcare system in a timely manner, this will lead to quick and widespread transmissions which will overwhelm the public health system."