Vaccines for 60% of residents in 2 weeks

A woman is given a Covid-19 jab at Lotus Rama IV where an area has been converted into a vaccination venue for people in communities in Klong Toey in the capital where the virus has been spreading rapidly in recent days. (Photo by Wichan Charoenkiatpakul)

The government is set to curb the new outbreak of Covid-19 across communities in the Klong Toey district of Bangkok within two weeks and has a plan to vaccinate at least 50,000 out of all 90,000 residents.

Starting on Tuesday, mass vaccinations were deployed in the Klong Toey area, with cooperation from state agencies, the private sector and community residents. The plan is to have about 60% of Klong Toey residents vaccinated, Prime Minister Prayut Chan-o-cha wrote on his Facebook page on Tuesday.

The government has been focusing on Klong Toey communities as significant numbers of people from the high-density area travel for work to many places across Bangkok and in adjacent provinces. Additionally, Thailand had 1,736 new cases and 27 deaths on Tuesday, raising the total number of infections to 72,788 cases, with 303 deaths. 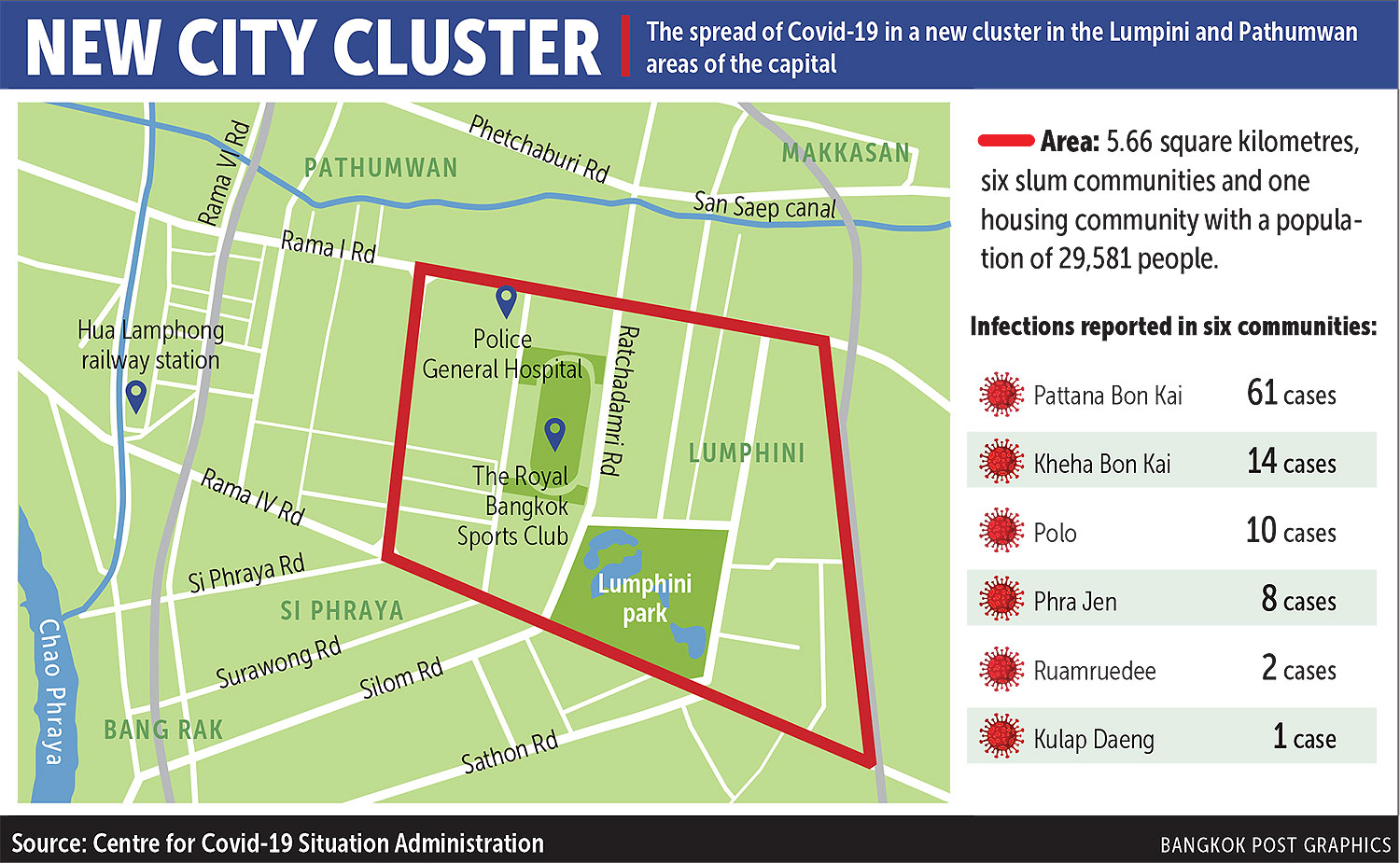 Bangkok governor Aswin Kwanmuang, who also assured the Klong Toey outbreak will be contained in two weeks, said two vaccination facilities have been set up in Klong Toey and each vaccinated up to 500 people on Tuesday and will today be moving forward to heighten their capabilities to inject up to 1,500 people per day.

Active Covid-19 case-finding operations are being carried out along with the mass vaccination programme and the focus has primarily been on 20 communities in Klong Toey where new infections have been detected, said Gen Prayut.

At least 20,000 residents from these 20 targeted communities will first have to be screened for Covid-19 while there are altogether 39 communities in Klong Toey where searches should be conducted for new infections, he said.

Gen Prayut expects at least 1,000 to 1,500 screening tests to be done every day until the target is met. The number of Covid-19 screening points will today be increased from two to four in order to administer testing for up to 4,000 people per day, said Pol Gen Aswin during a visit to Klong Toey.

Covid-19 infected patients will be sorted into groups relating to the severity of their symptoms before being transferred to hospitals or field hospitals for proper treatment, said Gen Prayut.

On Monday, a new field hospital with intensive care units and 432 beds was opened at Chaloem Phrakiat stadium in Thung Khru district, to accommodate infected patients who have developed severe symptoms and to curb more Covid-19 deaths, he said.

For those at-risk people in Klong Toey who may test negative for Covid-19 and need to undergo home isolation, they will be supplied with enough food throughout the required self-quarantine period.

The prime minister also ordered all other districts of Bangkok to learn from the handling of the Klong Toey Covid-19 outbreak and use it as a model for preventing more outbreaks in other areas.

Deputy Prime Minister and Public Health Minister Anutin Charnvirakul on Tuesday during a meeting of the Center for Covid-19 Situation Administration (CCSA) proposed to set up a new field hospital at Impact Arena in Muang Thong Thani capable of accommodating up to 5,200 patients, said a source.

The CCSA approved the proposal and instructed the army's emergency security situation response centre to support the setting up this new field hospital, said the source.

Previously, a combined team of officials from the Transport Ministry, the Defence Ministry, the Public Health Ministry and City Hall had planned to set up a new field hospital at Kodang Stadium at the Port Authority of Thailand located near Klong Toey.

But it was found that about two weeks would be needed to clean up and fix the stadium so that it could be turned into a field hospital, while Saphan temple is ready to become a new field hospital.

As a result, the government has changed its plan to have the field hospital moved to Muang Thong Thani instead.

CCSA spokesman Taweesilp Visanuyothin, meanwhile, raised concern about a spike of new infections in Bon Kai community in Pathumwan district that on Tuesday alone recorded up to 61 out of all 162 new cases in the district.