Govt prepared for all emergencies: Prayut

Prime Minister Prayut Chan-o-cha has vowed to procure up to 200 million Covid-19 vaccine doses to prepare for unforeseeable emergencies as the pandemic continues to rage unabated in several countries.

Speaking during his PM Podcast on Friday, Gen Prayut said the global pandemic showed no signs of going away anytime soon, so the government had to be prepared to deal with any situation that might arise.

"The first priority will be to increase our vaccine doses to 150 million doses or more and to prepare for any risk related to those vaccines,'' Gen Prayut said.

The government had set a target of buying 100 million doses to inoculate 50 million Thais and thus create herd immunity, he said. 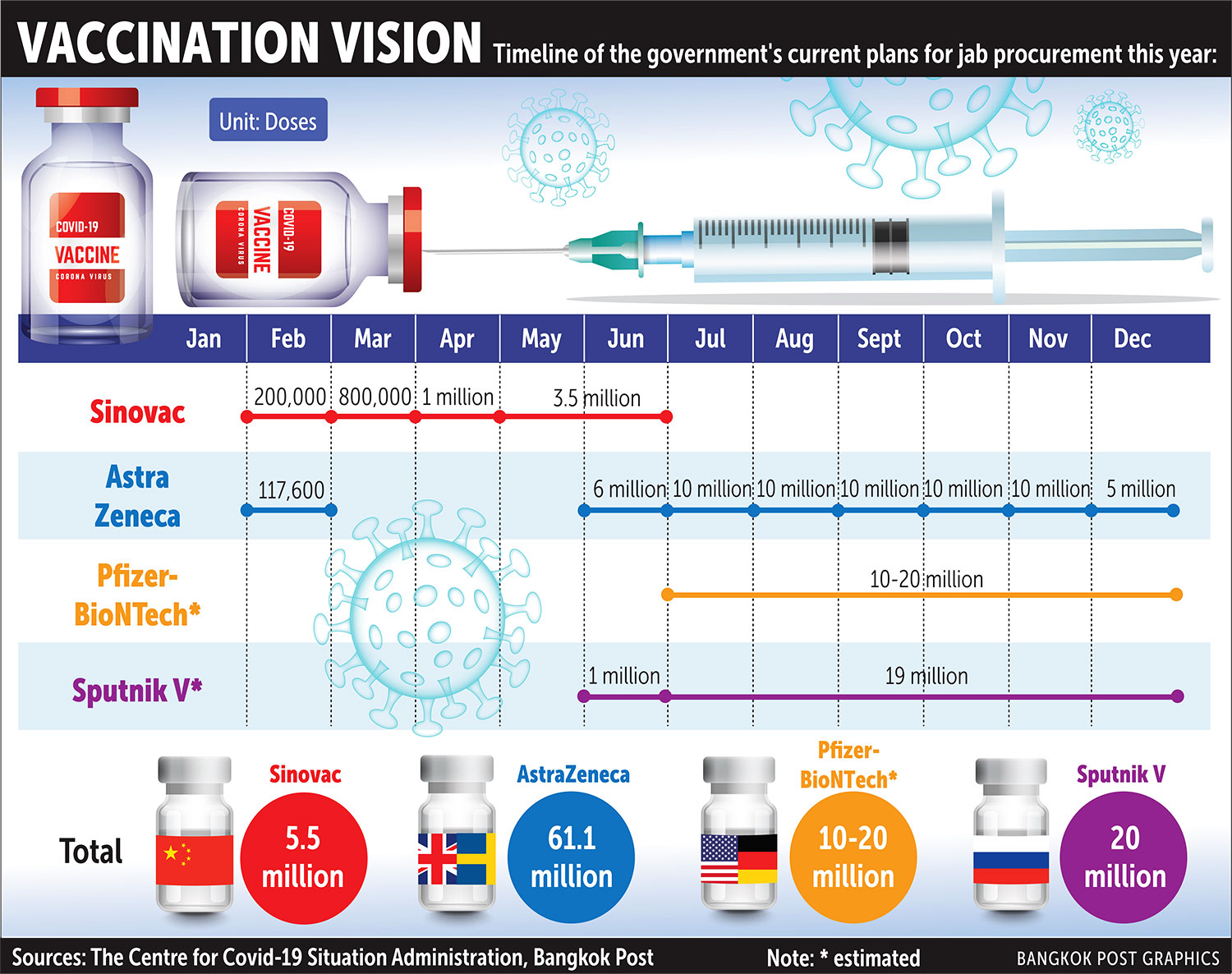 "But I think it is not enough. If we listen to information from around the world, it is still not clear whether herd immunity against this virus can actually be achieved," Gen Prayut noted.

He said Thailand had an adult population of about 60 million and thus required at least 120 million vaccine doses, with everyone needing two shots. Labourers, including migrant workers, in the business sector also needed to be taken into account in that respect, he pointed out.

"To prepare for potential risks and uncertainty, we may need 150-200 million doses of vaccine for future phases [of the vaccine rollout]," he said, "but we have to consider the shelf life of vaccines and next year's situation."

The PM said government agencies had until now been negotiating with seven manufacturers but he had instructed them to be even more proactive in procuring vaccines. Efforts were also underway to hold talks with other vaccine producers, he added.

However, purchases had to follow regulations from the relevant authorities such as the Food and Drug Administration (FDA), Gen Prayut said, adding that those agencies must also expedite their approval of manufacturers' applications for vaccine registrations.

"If we listen to information from around the world, it is still not clear whether herd immunity against this virus can actually be achieved." — Gen Prayut Chan-o-cha, Prime Minister

Another priority would be to administer as many first doses of the vaccine as quickly as possible by July, when it is expected that half of the adult Thai population will have had their first shot and thus have sufficient protection against the worst effects of the virus.

Government spokesman Anucha Burapachaisri said on Friday a committee on the procurement of Covid-19 vaccines had agreed that they should be added to the controlled goods list. The meeting also discussed potential government procurement of the Pfizer, Sputnik V and Johnson & Johnson vaccines.

The committee also agreed private hospitals should buy their own vaccines from manufacturers other than those which the government had already bought or planned to buy, Mr Anucha said. He added that these alternative vaccines should be ready for delivery to Thailand by the end of this year.

Mr Anucha added that the Government Pharmaceutical Organization (GPO) would also be responsible for managing private hospitals' vaccine procurement and liaising with vaccine manufacturers. All procurements must follow product liability law, he said.

Moreover, any private hospitals or private companies that wanted to import alternative vaccines would have to make full payment in advance to the GPO as well as arrange for insurance against any side effects caused by the vaccines.

The private sector can appoint representatives from vaccine manufacturers and submit letters of intent (LOI) to the GPO, he said.