People are screened on Wednesday at the opening of a new Covid-19 vaccination area at CentralPlaza Lardprao, the country's first vaccination centre outside a hospital.  (Photo by Varuth Hirunyatheb)

The first Covid-19 vaccination centre outside a hospital was opened on Wednesday at the CentralPlaza Lardprao shopping complex.

The opening was attended by Prime Minister Prayut Chan-o-cha who praised the private sector for rallying behind the government's drive for the national vaccination campaign.

The centre was operated jointly by the Bangkok Metropolitan Administration, the Thai Chamber of Commerce and Ramathibodi Hospital.

About 1,000 people who had registered for vaccinations via the "Mor Prom" app received jabs at the centre on Wednesday. 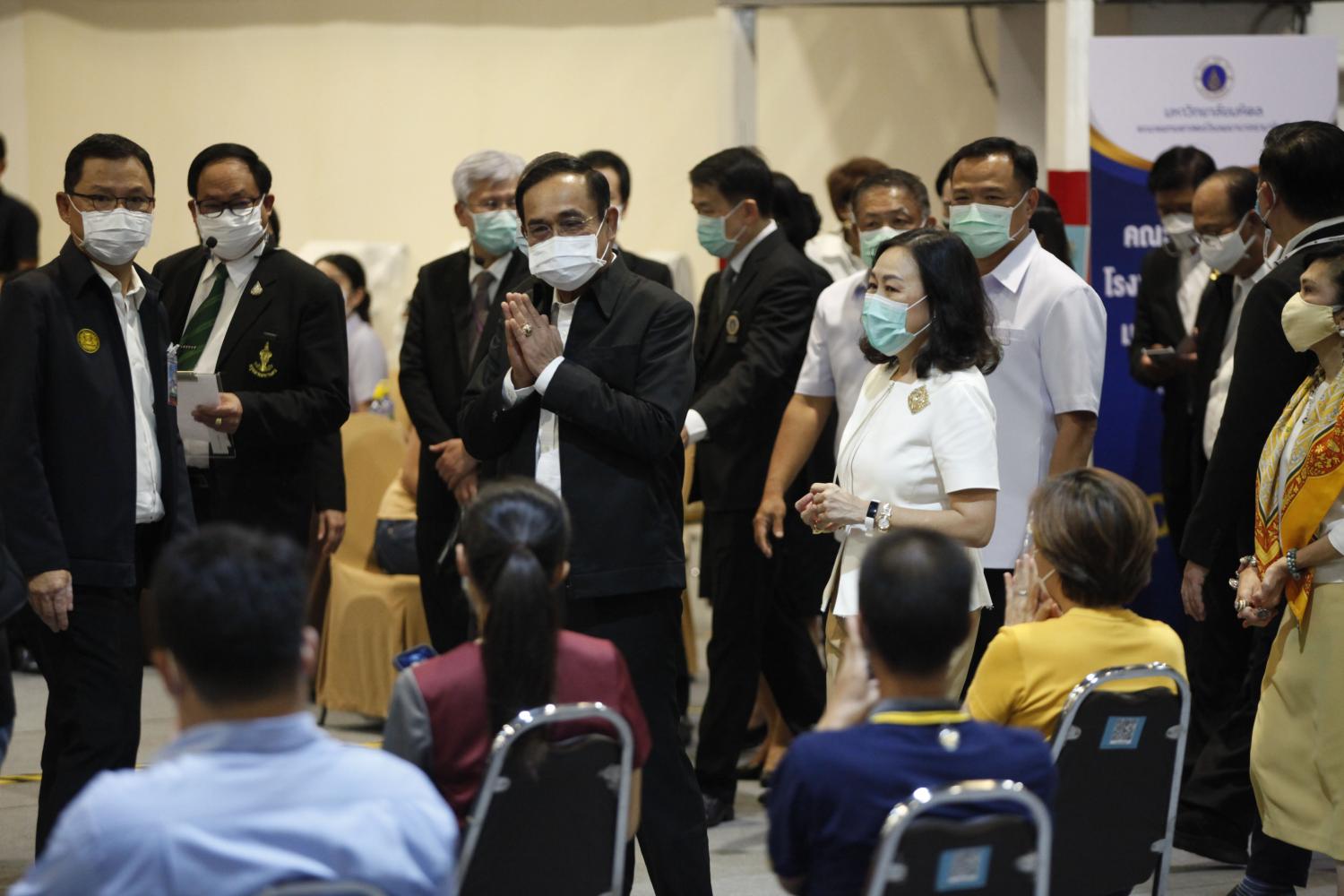 Most of them were government officers, Covid-19 prevention volunteers and people in high-risk groups.

The vaccination centre at Central­Pla­za Lardprao is open from 8.30am–5pm every day until all the registered vaccine recipients are vaccinated.

Gen Prayut thanked the private sector for its cooperation in delivering the vaccine shots and he believed many more businesses will open their premises to carry out vaccinations.

"Our inspection is probably more stringent than in other countries," he said.

The government will roll out mass vaccinations starting next month with the goal to speed up national immunization. The immediate goal is to finish the vaccinations of all frontline medical and healthcare workers this month, the premier said.

The government is also expediting inoculation in areas with high rates of infections such as in Samut Sakhon and the Klong Toey community in Bangkok.

Next month, mass vaccinations of the first dose will be launched for people in high-risk groups such as the elderly aged 60 and over and people with underlying diseases. People in other age groups will be inoculated right after that, he said.

Gen Prayut also expressed his concern over people who frequently travel for work or those who have to meet many people such as delivery service workers, public drivers, convenient store employees, restaurant employees and those in the hospitality sector. The government is working to give them vaccinations quickly.

More than a dozen non-hospital vaccination centres will be opened in Bangkok. The number will soon increase to 25 in Bangkok before branching out to the provinces, he said.

Gen Prayut added that the government has increased Covid-19 vaccine supplies from 100 million to 150 million doses -- the first 100 million doses of which are already secured. A huge batch of the AstraZeneca vaccine manufactured in Thailand will be delivered at the end of this month, he said.

The shopping mall was chosen as a vaccination site by the BMA, disease control committees and the Thai Chamber of Commerce.