As Covid-19 infections continue to surge in Bangkok with 28 clusters now detected across 19 districts, the Public Health Ministry is planning to inoculate at least five million people by the end of July.

The capital on Monday logged the highest number of new infections at 1,843, out of a record-high 9,635 cases found across the country. The surge was driven by an outbreak in several prisons, which accounted for 6,853 cases.

Taweesilp Visanuyothin, spokesman for the Centre for Covid-19 Situation Administration (CCSA), said authorities were closely monitoring the infection clusters in the capital, with the Bangkok Metropolitan Administration (BMA) separating them into four categories depending on the rate of local transmission and daily new infections.

The clusters which contributed the most to Monday's tally were centred around a construction worker camp in Laksi district, the Din Daeng flats and Huai Khwang market in Din Daeng district, Klong Thom Centre and the 22 July Roundabout in Pomprap Sattruphai district, and a construction site in Watthana district.

Attempts to contain the spread of the virus are currently focused on the worker camp in Laksi district, which has reported 885 cases to date. The camp was built by the Italian-Thai Development company to house labourers working at a nearby construction site.

Dr Taweesilp said authorities were concerned as there were 11 subcontractors working at the site and their workers lived across eight camps in the area. 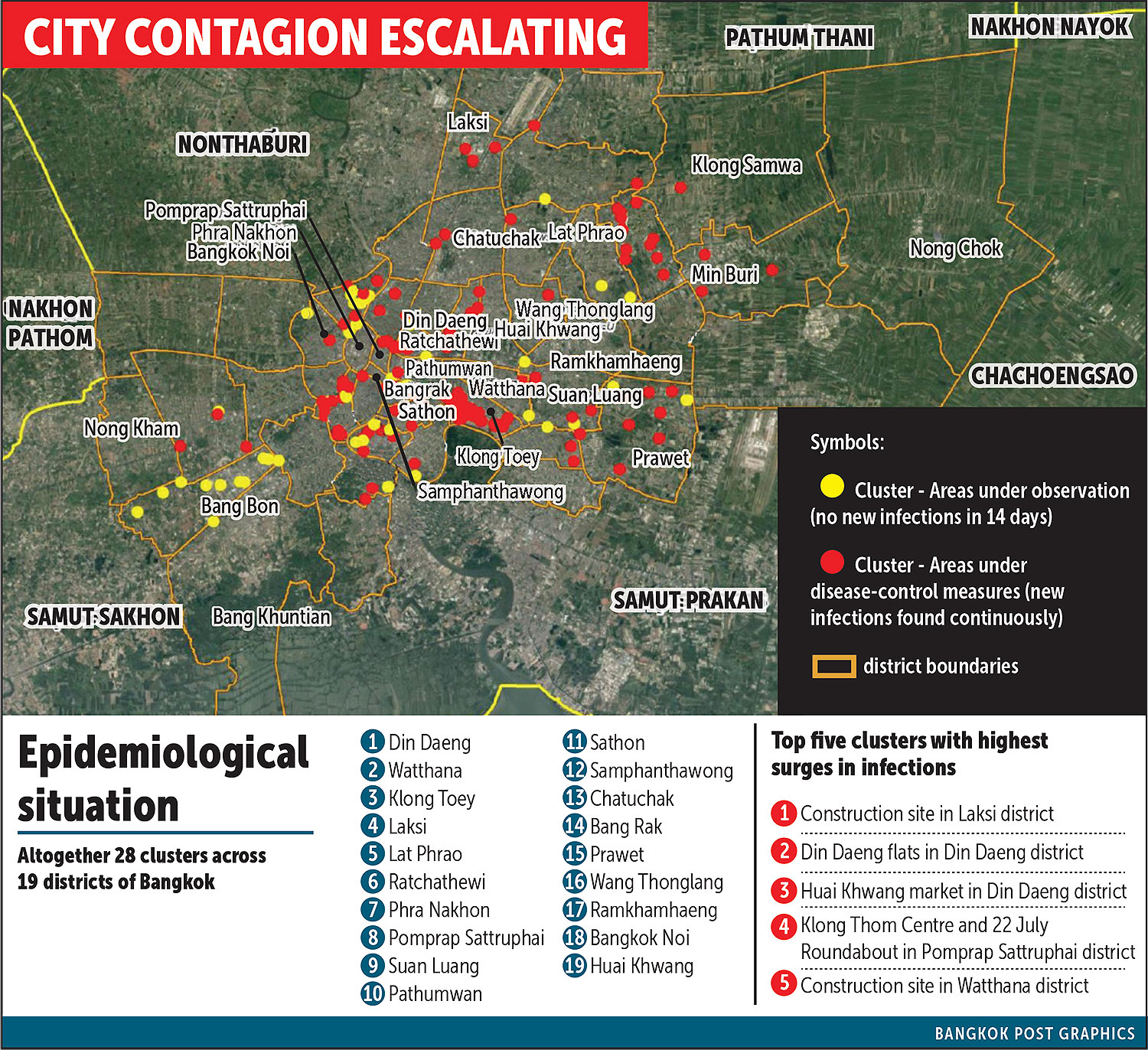 Although the construction site has been sealed off, six camps with 6,000 residents have been told to step up their Covid-19 prevention measures and limit the movement of their residents, he said.

Opas Karnkawinpong, director-general of the Department of Disease Control (DDC), said the DDC woud allocate vaccines to the BMA to ensure 70% of Bangkok's population was vaccinated within two months.

He said the mass vaccination drive would be launched as soon as the AstraZeneca vaccines arrive next month. About 2.5 million people will be given the shots each month, he said.

Dr Opas said the campaign's blueprint has been approved by the Covid-19 coordination committee for Bangkok, which was appointed by the prime minister.

Meanwhile, the Thai Fresh Market association is calling on the government to provide one million doses of vaccines for vendors at 2,000 fresh markets across the country.

Prinya Thammawattana, chairman of the association, said he had submitted a letter to the Public Health Ministry and the Commerce Ministry requesting assistance amid the spike in infections.

When a vendor or a customer tests positive for the virus, the markets linked to the infection will be closed for disinfection, he said.

So far more than 40 markets had been closed by such orders, affecting the livelihoods of farmers, as well as vendors, Mr Prinya added.

"The impact of closing a fresh market is huge. What the government can do to help is to vaccinate the vendors at every fresh market. In a way they are frontline workers and need the government's help," he said.