A fruit vendor at Simummuang Market in Pathum Thani province sprays his workspace with disinfectant to decrease the risk of Covid-19 infection on Thursday after more than 800 people were infected there. (Photo: Pattarapong Chatpattarasill)

Covid-19 vaccination will be provided via three channels with onsite registration instead of walk-in services, said government spokesman Anucha Burapachaisri.

Prime Minister Prayut Chan-o-cha has stressed that the inoculation campaign to be launched by the government from June 1 will be via three channels -- the Mor Prom (Doctors Ready) platform, onsite registration and special groups, said Mr Anucha.

About 7.4 million people, who are either the elderly or people with seven chronic diseases, have registered with Mor Prom platform, including 800,000 in Bangkok. The general public aged under 60 can register on May 31. 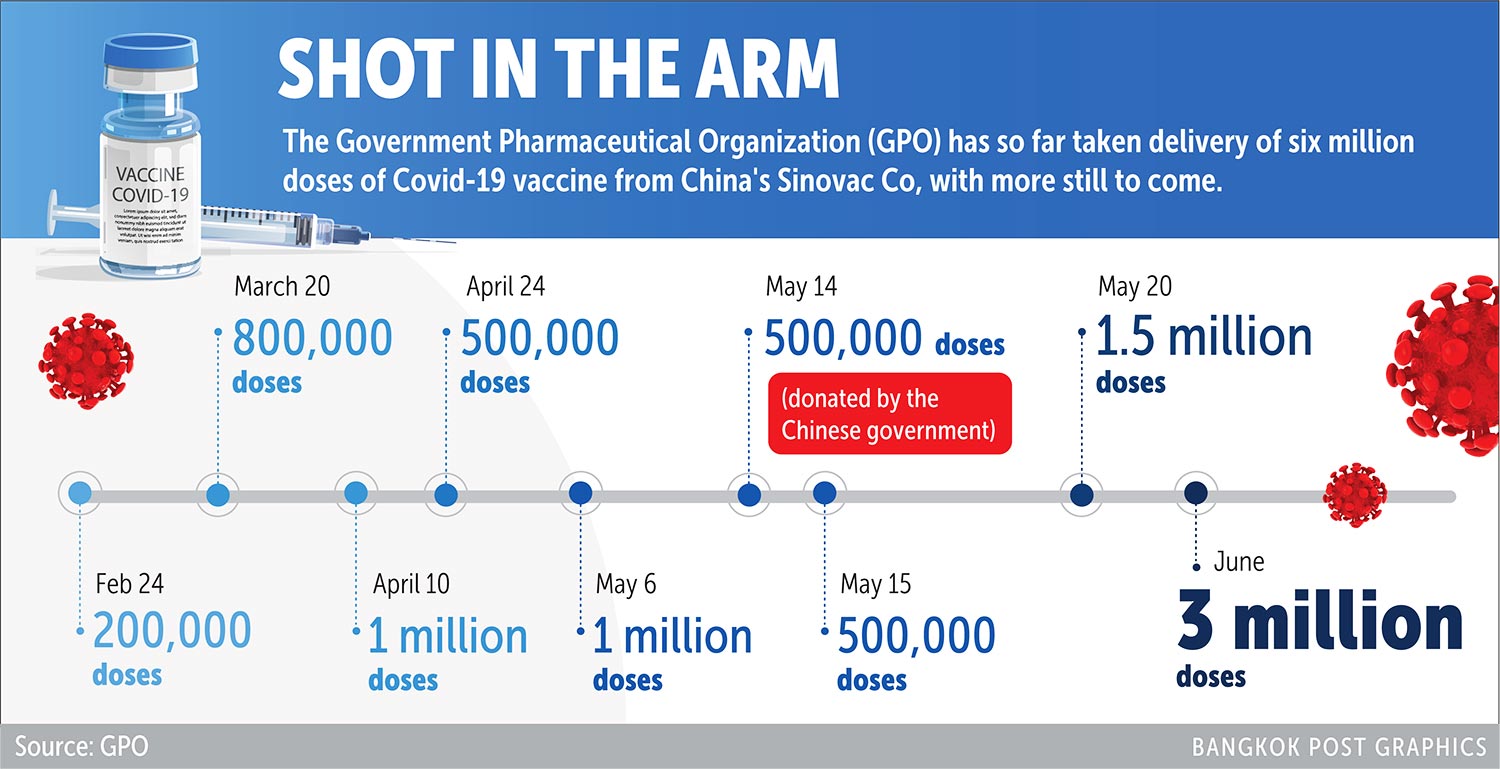 According to Mr Anucha, onsite registration will replace walk-in services to prevent misunderstanding because some people might have an impression they will can just drop by and get their shots from walk-in services.

Mr Anucha said the third channel involves "strategic" distribution of vaccines to target groups or people with special needs such as medical personnel, teachers, and people in the service sector.

The Bangrak Vaccination and Health Centre, which will administer Sinovac's vaccine which was donated to Thailand by the Chinese government, plans to inoculate 180 people per day.

In the first phase, the vaccine will be given mainly to 100,000 Chinese people in Thailand and Thai students with a plan to study abroad. The service will be later expanded to foreign nationals.

The Government Pharmaceutical Organization (GPO) on Thursday took delivery of 1.5 million more doses of Covid-19 vaccine from China's Sinovac Co at Suvarnabhumi airport. The GPO has received eight lots of the Sinovac vaccine since February, for a total of 6 million doses, and Sinovac will deliver another 3 million doses in June.

Maj Gen Thanathip Sawangsang, spokesman for the Internal Security Operations Command (Isoc), said Isoc will roll out a public relations campaign to educate the public about the vaccination programme.