Prime Minister Prayut Chan-o-cha gets his second shot of the AstraZeneca Covid-19 vaccine on Monday at Bamrasnaradura Infectious Disease Institute in Nonthaburi province. He received his first jab on March 16. (Government House photo)

The government has decided that the second dose of AstraZeneca vaccines will now be administered 16 weeks after the first dose, as opposed to 10 weeks, insisting the delay won't have any negative effect on the immune response against Covid-19.

The move came following reports that several hospitals have suspended inoculations with the AstraZeneca vaccine amid a shortage in Thailand.

Permanent secretary for public health, Kiattiphum Wongrajit, said the Public Health Ministry has readjusted its vaccine distribution guideline to accommodate the changing outbreak situation in the country, saying the focus now is giving the first dose of Covid-19 vaccines to as many people as possible.

As a result, those who are scheduled to receive their first vaccine in June will receive their second shot around October, said Dr Kiattiphum, before adding that the government has ordered 3 million vaccines from Sinovac, which will start to arrive next month.

Dr Kiattiphum made the remarks after a number of hospitals announced that they won't be able to administer the second shot of the AstraZeneca vaccine to those who have received their first shot in time.

Chulabhorn Hospital, for example, announced it will be postponing inoculations with the AstraZeneca jabs until it receives more doses, as it only has the Sinovac jabs left in stock.

Similarly, Vachira Hospital also said it will be suspending vaccinations with the AstraZeneca jabs indefinitely, until more supplies arrive.

The announcements stirred speculations that the government is running out of vaccines to meet domestic demand.

A spokesman for the Public Health Ministry, Rungrueng Kitphati, on Monday admitted that some areas have run out of the AstraZeneca jabs, while others are quickly running out, as the demand for the vaccine was very high.

The ministry will supply vaccines to areas which have reported shortages as best as it could, he said.

Despite the snag, the spokesman urged the public to have confidence in the national vaccine rollout, saying one dose of Covid-19 vaccine alone is enough to provide protection against new infections, severe symptoms and death. 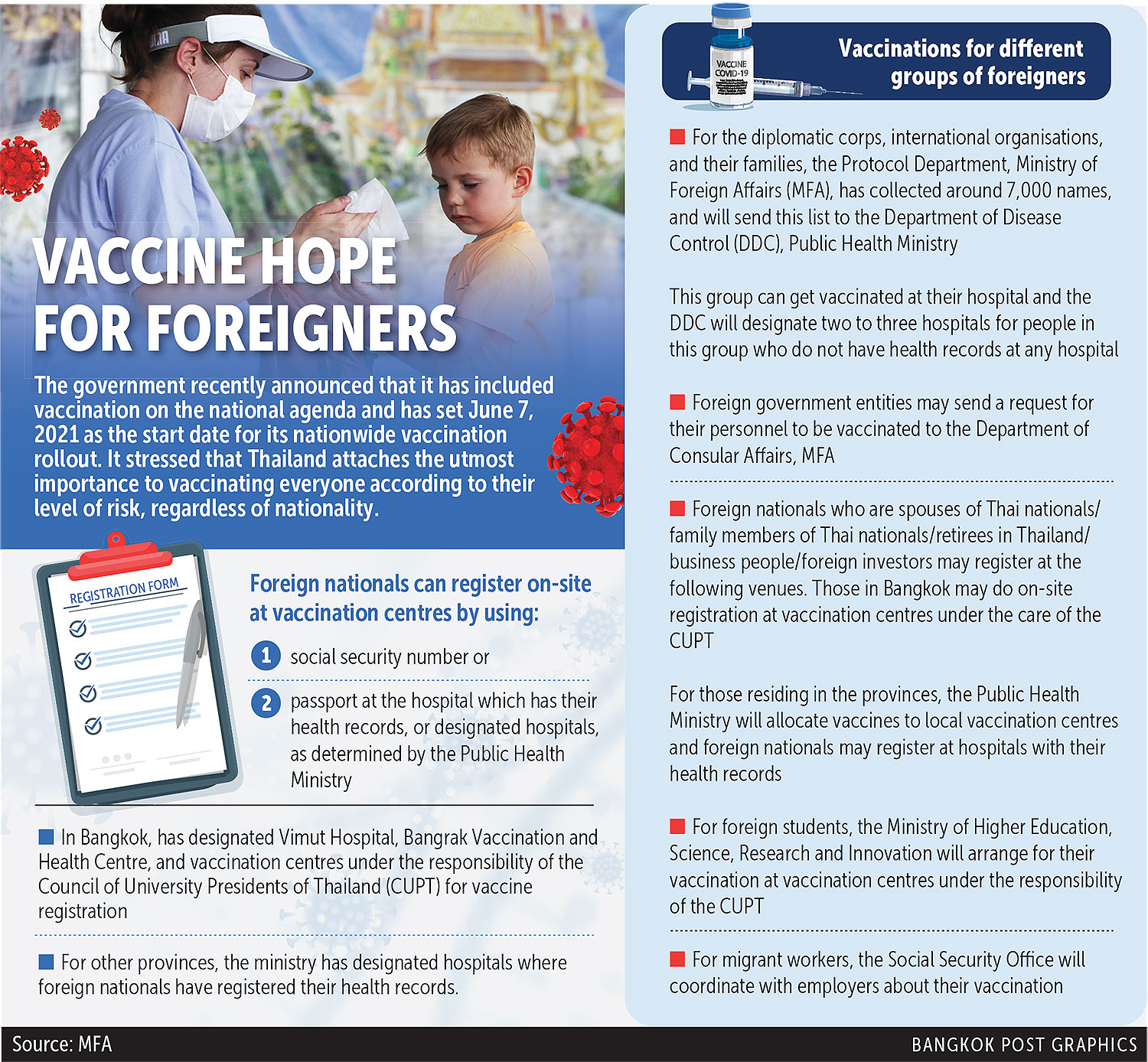 The second dose, he added, is just a booster intended to prolong the body's immune response against the disease.

Dr Rungrueng said those who have received a dose of the AstraZeneca vaccine are not advised to receive the Sinovac vaccine for their second shot, since they were of a different type.

The public is advised to complete their vaccination rounds with the same vaccine before seeking a vaccine from another manufacturer, he said.

Despite the decision to delay the administration of the second dose for the public, Prime Minister Prayut Chan-o-cha on Monday received his second dose of AstraZeneca vaccine at Bamrasnaradura Infectious Diseases Institute, 10 weeks after his first shot on March 16.

The premier said the nation's vaccine distribution plan might be adjusted according to the pandemic situation in each area and called on people to rely on vaccine information from the Public Health Ministry to prevent confusion.

Public Health Minister Anutin Charnvirakul said he is confident that AstraZeneca will deliver its vaccine on schedule in June and confirmed that there would be enough vaccines to inoculate the public against Covid-19 from June 7, when the national rollout is expected to get into full swing.

Director-general of the Disease Control Department, Opas Kankawinpong, said the CCSA will meet to adjust the country's Covid-19 vaccine distribution plan based on the amount of vaccines available, current population numbers and the local outbreak situation.

So far, Thailand has received 117,600 doses of the AstraZeneca Covid-19 vaccine, which arrived on Feb 24. Six million locally manufactured AstraZeneca does will be delivered to the government in June.

Between June-December, the government is expected to receive 61 million locally produced AstraZeneca doses.