The government has revamped its Covid-19 vaccine allocation system and suspended the Mor Prom app to deal with emerging new clusters of Covid-19 and bottlenecks in registration. 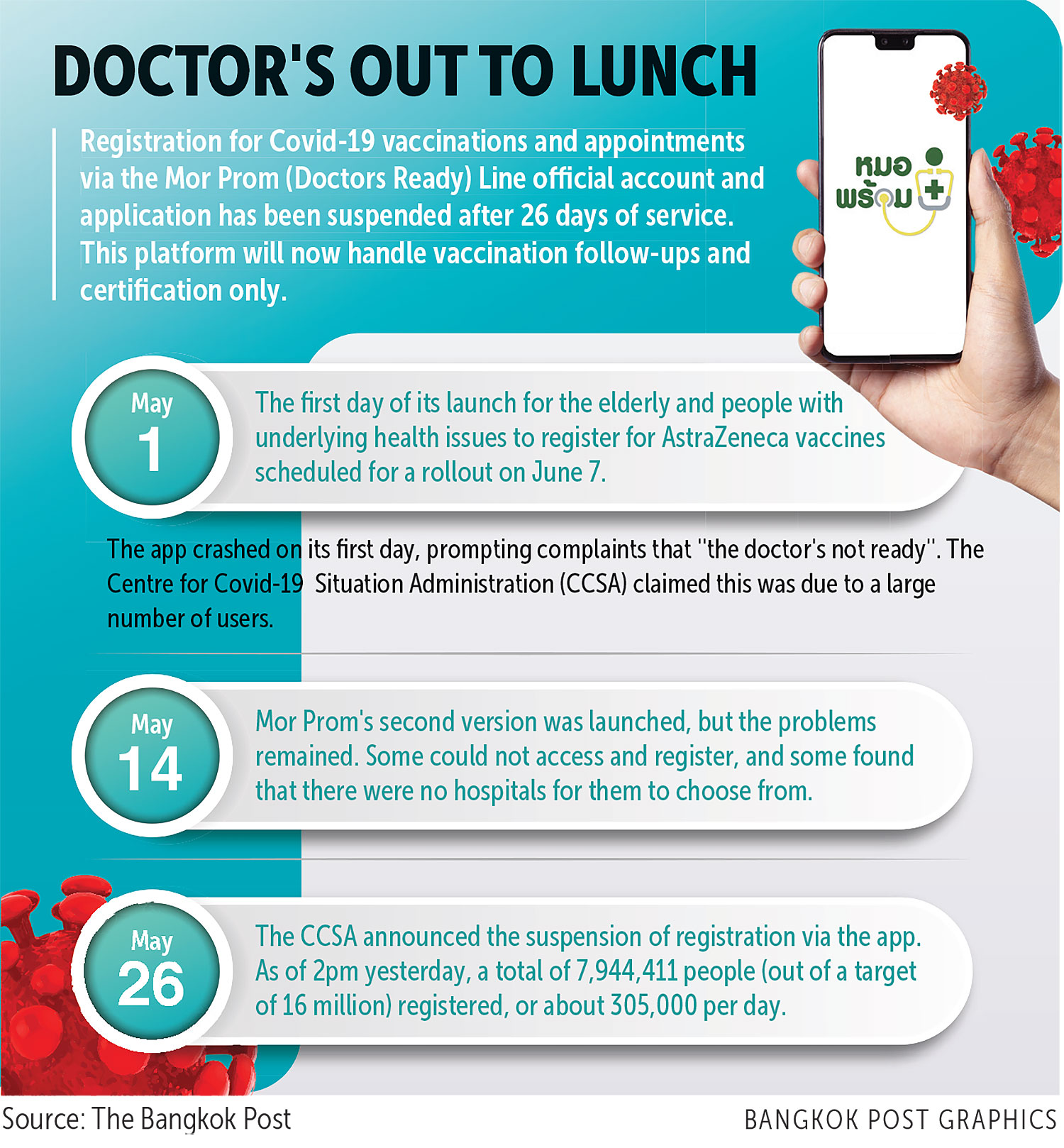 Amid increasing public confusion, he said registration was now excluded from the Mor Prom (Doctors Ready) app. The platform will now handle vaccination follow-ups and certification only. Earlier the government announced the public would be allowed to register through Mor Prom.

But Dr Taweesilp said each province should now have its own vaccination registration system like those of Bangkok, Phuket and Nonthaburi to serve the large numbers of registrants in their areas and prevent "bottlenecks" on the Mor Prom platform.

However, no further information has been provided by the CCSA about how those who were not in the elderly group and the group with seven underlying diseases in provinces apart from Bangkok, Phuket and Nonthaburi would be able to register for vaccinations.

The spokesman said the elderly and patients with one or more of seven chronic conditions who had already registered for vaccinations with Mor Prom would not have to reapply and would be inoculated "in due course". Their vaccinations would happen soon, he said.

Dr Taweesilp went on to say that apart from using provincial registration systems, people will be able to apply for vaccinations at local hospitals and with local health volunteers. That data would be then forwarded to the centralised Mor Prom platform.

He also said Covid-19 vaccines would be distributed according to the needs of different areas and groups of people. Areas with serious outbreaks and groups of at-risk workers would receive more doses.

Government spokesman Anucha Burapachaisri said a meeting of the CCSA's operating centre chaired by National Security Council secretary-general Gen Natthapon Nakpanich agreed the vaccine distribution plan will be adjusted based on the number of infections in each province.

On May 1, the Mor Prom service was launched via an application and Line Account for the first group of vulnerable people: the elderly and those who have seven chronic diseases. A huge number of people flocked to register for a Covid-19 jab via the platform on the first day of bookings, causing the system to crash briefly due to overwhelming demand.

Critics said the app not only crashed frequently but it was also not properly integrated with personal data and medical records. Some users said Mor Prom told them they had already had their first jabs before they had even been given an initial appointment.

Prime Minister Prayut Chan-o-cha said the government has sped up the inoculation of medical personnel, health workers, and people in at-risk areas, people aged 60 and older and those with underlying health problems. As of Tuesday, 3,024,313 people had been vaccinated against Covid-19 -- 2,044,123 with their first jab, and 980,190 with two shots. Meanwhile, Thailand logged 41 new Covid-19 fatalities over the past 24 hours, a new daily record, and 2,455 new infections.