When the VVIP customers disembarked from their limousines at the Krystal Exclusive Club, young women in tiaras, angel wings and not much else sometimes greeted them.

The VVIP clientele were whisked to the VVIP rooms, with their padded walls and plush sofas. Thai government bigwigs partied at Krystal — one of its mottos is “the luxury entertainment of night light” — as did diplomats, army officers and business owners. For much of the pandemic, coronavirus restrictions did not stop the fun.

But this spring, as go-go dancers shimmied, Krystal and another neighbourhood nightclub, Emerald, turned into the epicentre of what is now Thailand’s biggest and deadliest coronavirus surge, according to health ministry officials. Scores of people linked to the clubs have tested positive, including an ambassador and a government minister. Police officers and women who worked at the clubs have been infected, too.

For all the mask-wearing rigour and lockdown obedience displayed by many Thais, the abandon of a privileged few catalysed Bangkok’s latest coronavirus outbreak, health officials said. The nightclub cluster also highlights the impunity of the rich in a country with one of the largest wealth gaps among major economies.

Thailand went for months without a confirmed case of local transmission, but the epidemic has now radiated from luxury nightclubs that cater to powerful and wealthy men to the warrens of slums that hug Bangkok’s highways and railroad tracks. In these cramped quarters, social distancing is impossible. Infections have also spread to prisons, construction camps and factories.

“The rich people party and the poor people suffer the consequences,” said Sittichat Angkhasittisiri, a neighbourhood chairman in the capital’s largest slum, Khlong Toey, where the coronavirus has infected hundreds of people.

After recording fewer than 5,000 cases total through November, Thailand racked up more than 5,800 cases on a single day in late May. The total number of infections is now about 175,000. Gone are the days when the World Health Organization praised Thailand for its coronavirus-fighting prowess.

Thailand’s virus surge, happening just as many Western nations approach a semblance of normality, is part of a late-breaking wave that has washed over much of the rest of Southeast Asia, where adequate vaccines are largely unavailable. Thailand is counting on local production this summer of the AstraZeneca vaccine by a company controlled by His Majesty the King. The company has never made vaccines before.

The phuyai, as the gilded elite of Thailand are known, can book overseas tours to get vaccines unavailable at home; one 220,000 baht jaunt for jabs in Russia is fully booked until July. But the poor struggle. Many must wait for cots at free government field hospitals set up in stadiums or other areas. The rich with mild cases can convalesce at expensive hotels.

“Society is very, very unequal,” said Mutita Thongsopa, a dairy company employee who came to Bangkok to support her family of farmers from Thailand’s northeast. “The phuyai destroyed the Covid situation themselves, and we, the small people, we cannot live.”

On April 27, Ms Mutita’s sister, Supatra Thongsopa, a 40-year-old grocery clerk at a Bangkok mall, arrived at a government testing site at 3am to secure a spot. She waited all day, then the next day and the next. As she waited, Supatra texted with her sister to complain of fatigue and stomach problems.

She was finally tested May 1. The result came back positive, and she died five days later. Supatra’s boyfriend, who also developed Covid, is still in the hospital. 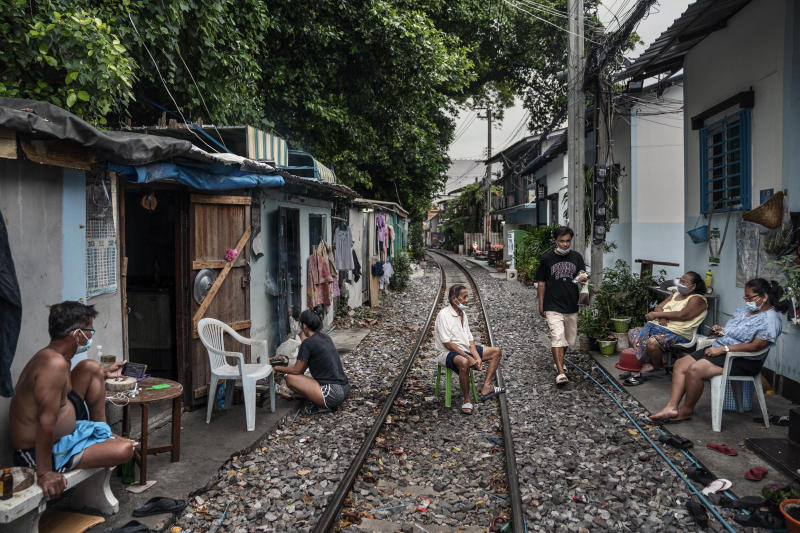 People that live along railroad tracks in a part of the Klong Toey slum, the city's largest, socialise in the early evening, in Bangkok, May 7, 2021.

Although a Bangkok court sentenced the managers of Krystal and Emerald to two months in prison for violating a Covid emergency decree, no one else is facing charges so far. The police say they are looking into whether prostitution, illegal in Thailand, may have occurred at the clubs. Representatives of both clubs refused to comment.

“On the Krystal case, it is still under investigation,” said Maj Gen Sophon Sarapat, commander of a Bangkok Metropolitan Police division. “We are waiting for the suspects to turn themselves in. We have sent a letter to the owner of the club.”

When cases involve high-profile tycoons or politicians, though, investigations in Thailand have a habit of fizzling. Murder charges do not materialise. Well-connected individuals slip into exile. Thailand’s three waves of coronavirus infection have crested in the shadowy zones where the rich profit from questionable businesses and defy Covid protocols.

The first outbreak, last spring, was traced by virologists to a Bangkok boxing stadium operated by the country’s powerful military, which makes money on sports gambling. The second cluster, late last year, was tracked by health officials to a sweatshop seafood business, which depends on immigration officers turning a blind eye to workers trafficked from neighbouring countries. And the third, which has killed about 1,000 people, originated in the nightclubs whose cosiness with law enforcement is an open secret.

“In Thai culture, we can smile and lie at the same time,” said Chuwit Kamolvisit, the anti-corruption campaigner and former member of Parliament. “Maybe to survive in politics, that is OK. But when it’s Covid, this is too dangerous.”

Before he ventured into politics, Mr Chuwit made his fortune through a collection of massage parlours in Bangkok with names such as Victoria’s Secret. He said his business was greased by bribes to the police.

“Krystal is like another Government House, because it’s so popular with those people,” Mr Chuwit said, referring to the Italianate building that holds the offices of the prime minister and the Cabinet.

This year, Prime Minister Prayut Chan-o-cha, a retired general who staged a coup seven years ago, warned that if anyone referred to Krystal as an alternate to his offices at Government House, they could face legal consequences. 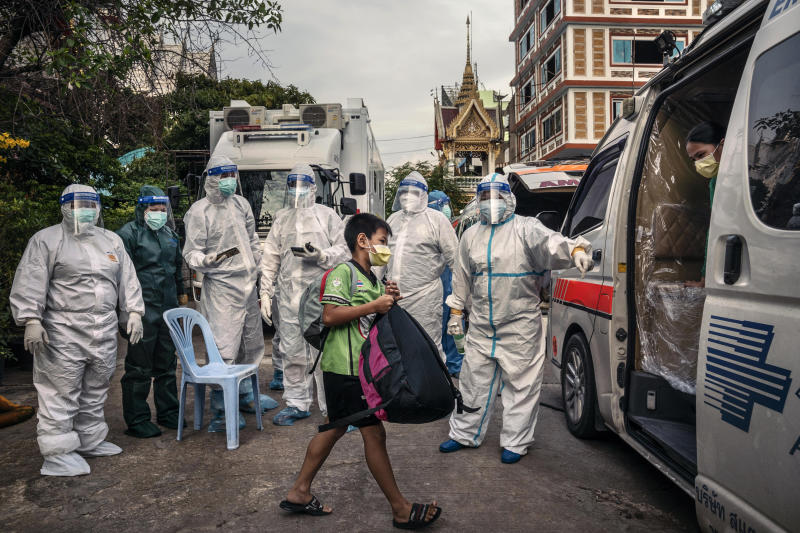 A child who tested positive for Covid-19 joins his mother in an ambulance headed for the hospital after he was first kept in a community isolation area for residents of the Klong Toey slum, in Bangkok, May 8, 2021.

It is hard to say how the coronavirus infiltrated Khlong Toey, where thousands of people live crowded together in slum communities near railroad tracks and a fetid canal. One origin story traces this spring’s outbreak to a woman who some say frequented various clubs.

Another story connects it to a man who met a friend who had partied in the Krystal neighbourhood. When he started feeling unwell, the man quarantined in his car because he had nowhere else to go, said Mr Sittichat, the neighbourhood chairman. Still, the man passed the virus to three others, setting off community transmission, Mr Sittichat said.

“Officials talk about quarantine, but that’s for rich people,” he said. “Our houses are too small. We have no space.”

In another Khlong Toey community, about 10% of residents have tested positive for the virus. Neighbourhood officials were forced to isolate the infected behind sheets of plastic at the back of an outdoor community centre.

After suiting up in a plastic raincoat and plastic glasses to deliver water to a new batch of Covid patients, Mariam Pomdee, a community leader, handed out donated meals to residents whose food supplies were waning. With the virus spreading through Khlong Toey’s narrow alleys, employers have been shunning its residents.

Yet, the people of Khlong Toey are vital to making Bangkok run. They deliver the packages and the takeout meals, their motorbikes weaving past Mercedes vehicles tightly sealed from the heat and the haze. They build the glass-sheathed condominiums and the malls that seem to materialise like mushrooms after the monsoons. Their vast market feeds Bangkok its vegetables, fruits and wriggling seafood.

Unemployment, already high because of Thailand’s pandemic-closed borders, has soared in Khlong Toey. To survive, some families have sold the vaccine registration cards they received as residents of a high-risk neighbourhood.

Thailand has yet to fully start nationwide mass vaccinations, and less than 2% of the population is fully inoculated. A few wealthy Bangkok residents have boasted on social media about buying vaccination cards from the city’s most desperate residents.

“The rich who are already privileged are stepping on the poor,” Mariam said. “They believe their money can buy anything.”