While some businesses welcome the train project, others fear for the loss of their homes

The planned underground Purple Line train route has caused a mixture of hope and fear in parts of the old communities it will run through. 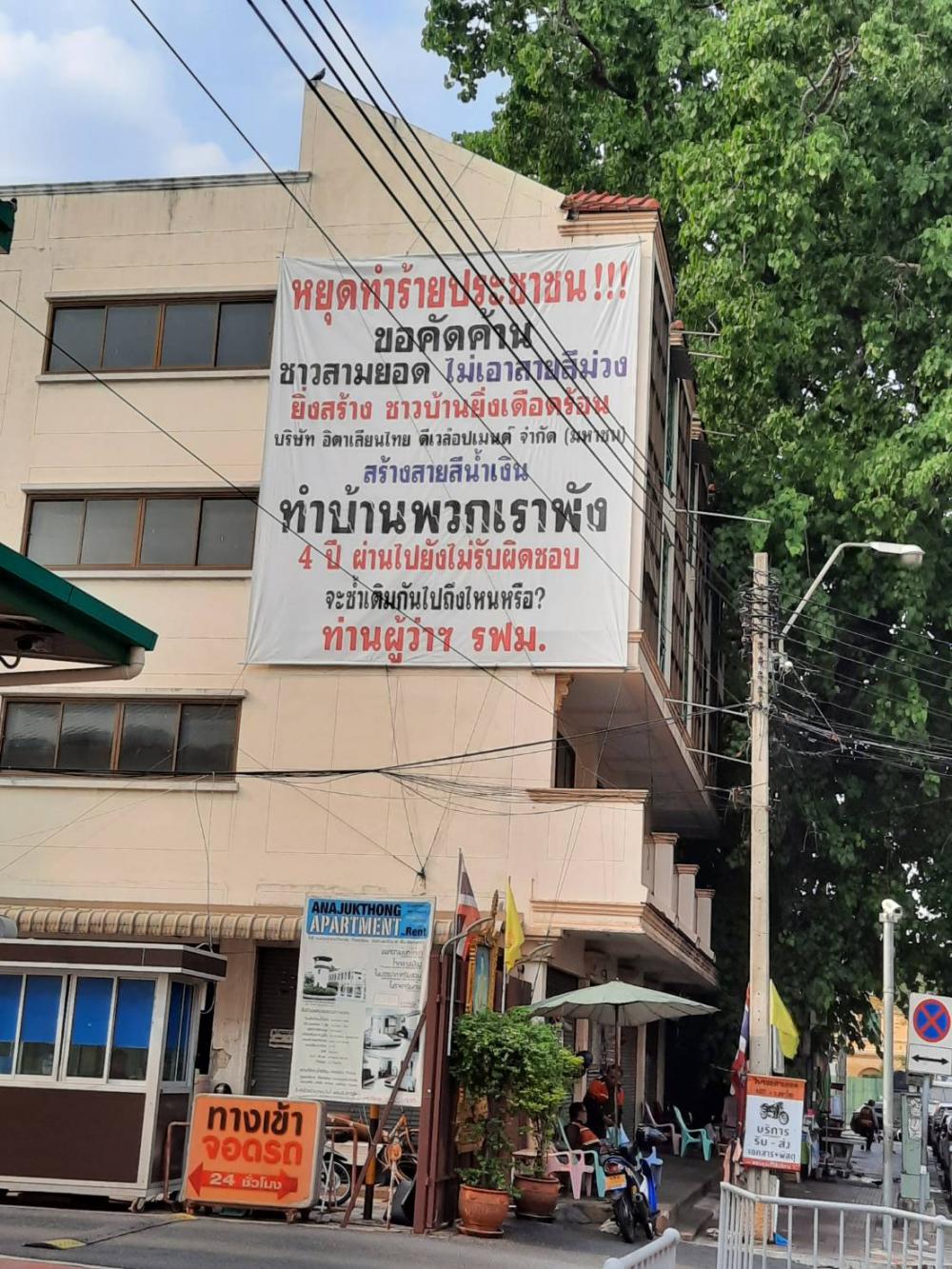 A banner is strung on the wall of a building opposing construction of the Purple Line electric train route. Some residents fear the project would involve expropriation of land and damage their homes. (Photo by Poramet Tangsathaporn)

On July 25, 2017, the cabinet approved a proposal by the Mass Rapid Transit Authority of Thailand (MRTA) to go ahead with the Purple Line.

Estimated to be worth about 125 billion baht, the 23.6-kilometre route, from Tao Poon to Rat Burana, is a southern extension.

The winner of the tender is expected to be announced in August or September, with the service to be launched in 2027.

The route passing through the old town section will be built 30 metres underground. Despite that, some residents are worried about the development.

Several communities in the old town section have built on land leased from the Crown Property Bureau (CPB) and Treasury Department.

"Those of us in Bang Lamphu are happy to have this project because it will help our community prosper economically, but we have concerns about the older generation who are attached to this place," said Thatchawin Suraseth, 50, owner of the Lee Seng Jewelry shop and a hotel in the Bang Lamphu area.

Despite the businesses and property belonging to his family, Mr Thatchawin said he has to fight to ensure the underground rail line will not affect traditional communities that have been there for more than a century.

He said residents have not been informed about which areas need to be expropriated and what will happen to their communities.

Over the past two years, Mr Thatchawin represented the Bang Lamphu community in submitting five petition letters to the government, the Transport Ministry and the MRTA asking for clarity about the land which the MRTA needs for construction.

"The eldest person who signed the petition was a 92-year-old lady who has lived here since she was born."

He said Transport Minister Saksayam Chidchob has asked the MRTA to revise the plan, so they will dig another 5m deeper to avoid damaging the foundations of people's houses.

The likely effect of the Purple Line on Bangkok's old town received public attention early this year after concerns were aired from Wat Iam Woranuch, which is located near Bangkhun Phrom Station near the Bank of Thailand.

The temple abbot was alarmed the project would reclaim the White Pagoda and the 237-year-old chapel.

The MRTA had earlier said they would not be evicted and there would be no effect on any religious architecture in the temple premises.

Yet residents who live in the community around the house were not convinced.

They include "Note", a 36-year-old man who has run an amulet shop at the temple.

Note -- who asked not to reveal his real name -- has been living in the temple his entire life. His grandfather was a dentist taking care of monks at the temple.

As a result, the temple allowed the family to live there.

Now, the Purple Line project -- despite sparing the historic pagoda and two-century-old chapel -- will claim the space occupied by his amulet shop and house at the temple where his family lives for part of the train station.

He said the temple could save his amulet store, as it is on the temple's property. However, the temple has said nothing about where his family can stay.

He said it would be difficult for his family to move elsewhere as his mother is in ill-health.

"My mum's condition has grown worse because she is worried about where she will live next," he said.

He had spoken to the temple's abbot, but he did not know how to help him.

He had submitted the details to the MRTA but was told the matter "was still in process".

Chutiporn Buaket, 36, a staff member of the Eaksiam Machinery Secretary, said the train development would harm some shop owners who had rented land and invested money to put up buildings.

The company she works for has been doing business there for many years. The owner had built 11 shophouses and buildings.

However, the company was asked to give up land leases for five shophouses for the MRTA to build the Blue Line Station, and now has to give up another two leases as the authority needs the land to develop stations for the Purple Line.

The company built a four-storey building and one shophouse on that land to serve as a home office, said Ms Chutiporn, who takes care of legal issues for the company.

When the Blue Line project was built in 2017, she said the company building and shophouses were damaged by construction.

She is now afraid that construction work on the Purple Line will affect the buildings' structure.