Could cause job losses, bug spread

Jatupon Dunlchat, left, and Rattiya Deepattana in fancy costomes conduct an online class from Suraomai School in Suan Luang district of Bangkok on Wednesday. The capital, where remote learning remains the norm, has been hit heavily by Covid-19 since the current third outbreak began in early April. (Photo: Wichan Charoenkiatpakul)

The pros and cons of a proposal that Bangkok be locked down for seven days to contain the soaring number of Covid-19 infections have to be weighed carefully, the Centre for Covid-19 Situation Administration (CCSA) says.

CCSA spokesman Taweesilp Visanuyothin said the lockdown proposal to restrict people's movement in Bangkok was discussed at the CCSA's meeting on Wednesday.

However, the proposal must be considered carefully. With the lockdown, businesses would close and workers would return in large numbers to their home provinces, triggering more transmissions, Dr Taweesilp said.

"The lockdown measure has its pros and cons and must be weighed," he said.

"Closure of an area or factory may bring infections under control, but workers will be left jobless and head back to their home provinces and problems will arise in other areas. Putting Bangkok in a lockdown will prompt movement to the provinces and lead to more infections,'' Dr Taweesilp said. 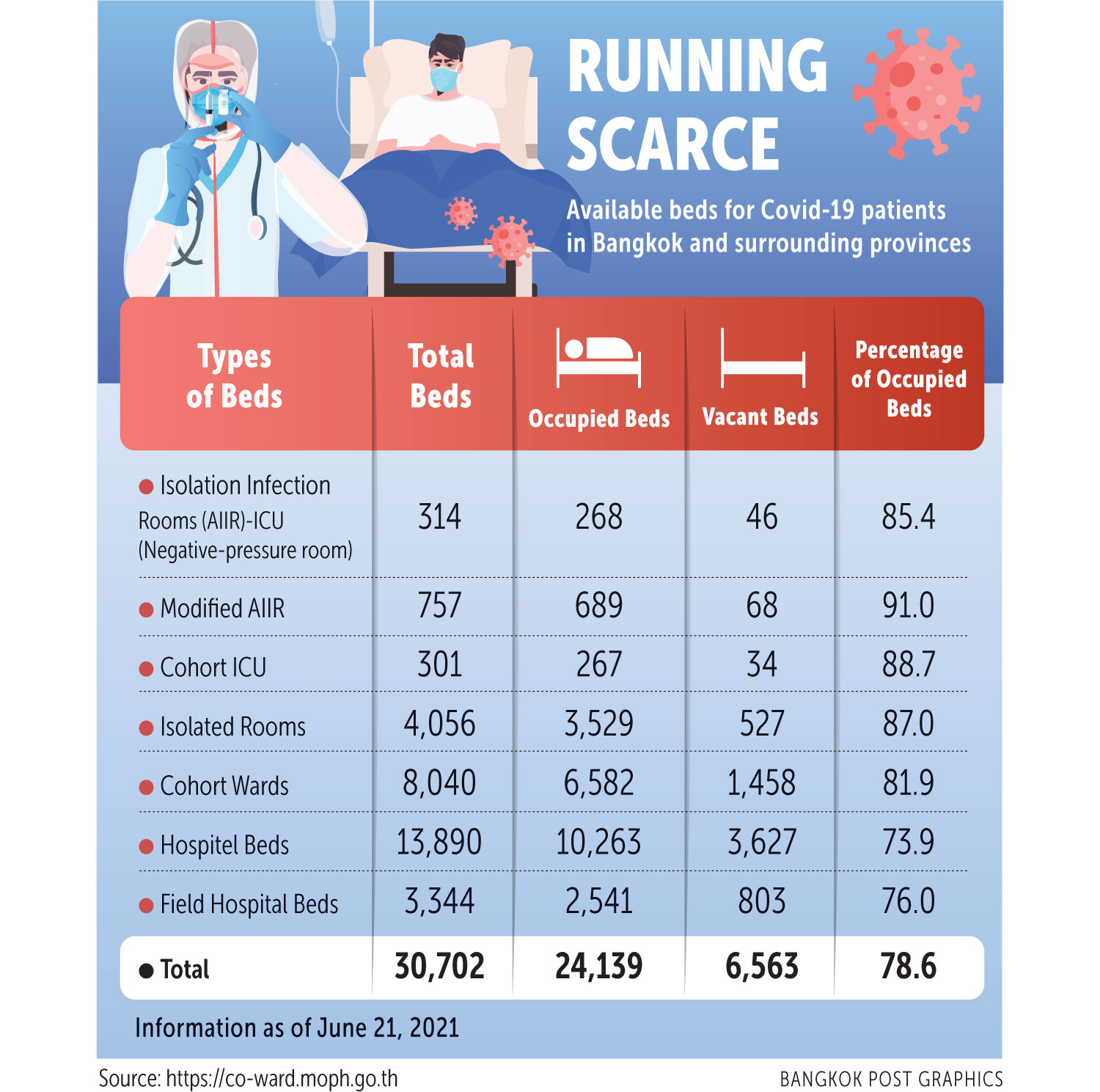 Currently, the "targeted lockdown" measure has already been adopted to deal with specific outbreak areas, including camps for construction workers.

The "bubble and seal" approach where workers are not allowed to leave their dormitories and construction sites will be implemented to contain transmissions in Bangkok, he said.

Unlike Samut Sakhon where the approach was first adopted, Bangkok has a larger population of residents and migrant workers, with many locations and the complexities of organisations so it will not be easy to implement the measure, Dr Taweesilp said.

On Tuesday, Nithiphat Chiarakun, head of the division of respiratory disease and tuberculosis at the Faculty of Medicine Siriraj Hospital, posted on Facebook that Bangkok should be locked down for seven days because the number of hospital beds for Covid-19 patients was running out.

He said the number of new daily cases continues to soar and may go beyond the current four-digit number.

The rate of new infections detected from testing at hospitals was higher than 10%, he wrote.

He added that the number of infections among children was also higher than during previous rounds of the pandemic.

Though this group of patients did not suffer severe symptoms, beds had to be arranged for them at both hospitals and field hospitals, he wrote.

"It seems we have been cornered without much choice,'' he wrote.

"The last solution to the crisis is to lock down Bangkok for at least seven days to fix these existing problems and prevent new ones.

"This time, people in Bangkok must be prevented from returning to the provinces -- a mistake which was made during Songkran," Dr Nithiphat wrote.

Gen Natthapon Nakpanich, secretary-general of the National Security Council and the director of the CCSA's operations centre, said the Public Health Ministry was trying to find a solution to the bed shortages and military field hospitals are being considered as an option.

He also said the CCSA will consider whether to tighten disease control measures as many people fail to strictly follow precautions against Covid-19, though he ruled out the possibility of imposing a curfew ahead of protest rallies planned for today.

Somsak Akksilp, director-general of the Department of Medical Services, admitted that the current number of hospital beds for Covid-19 patients, especially those who need to stay in ICU units, is limited due to the increasing number of new infections every day.

Many state-owned hospitals are doing their best to increase the number of beds for patients who suffer severe symptoms from 200 beds in early April to 440 beds.

Unfortunately, there are now only around 20 beds left, Dr Somsak said.

Even though there are more than 200 private-owned hospitals in Bangkok, they cannot offer a helping hand due to the limited number of ICU beds in each hospital. There was also insufficient medical staff to take care of Covid-19 patients, he said.

He said the department will discuss the problem with the Bangkok Metropolitan Administration for the better management of hospital beds.

The issue of implementing the bubble and seal measure to contain transmissions in communities will also be discussed.

"If we let the situation go on like this, we will see the public health system collapse," Dr Somsak said.