Killings said to be driven by rage

PATHUM THANI: The father of the gunman who killed a convenience-store employee and a Covid-19 patient said his son had pent-up anger dated back to his army service.

Kitti Saengnilsakul, 61, told Pathum Thani police chief Pol Maj Gen Chayut Marayat on Thursday that his son Kawin, 23, had held a grudge against his army trainer who he alleged had used drugs and physically assaulted him.

That was the reason why the son went to the Princess Mother National Institute for Drug Abuse Treatment in Thanyaburi district, Mr Kitti said.

He told the provincial police chief that he had warned his son not to hurt innocent people.

Mr Kawin served as a private at the Ranger Battalion in Lop Buri province for two years. He was discharged on Nov 1, 2019.

According to Mr Kitti, his son left home in Thanyaburi at about 10pm on Wednesday. He only learned from police the next morning that his son had committed murder, he said.

Security guards at the compound of the Princess Mother National Institute for Drug Abuse Treatment on Phahon Yothin Road said that Mr Kawin arrived on a white Isuzu pickup truck. After getting out of the vehicle, he fired several random shots at the command building of the institute. He then walked to the field hospital behind the building and killed a Covid-19 patient there.

Pol Maj Gen Chayut, the Pathum Thani police chief, said Mr Kawin had two firearms and before the attack on the institute, he had killed an employee at a 7-Eleven convenience store on Soi Lat Phrao 25 in Chatuchak district, Bangkok.

After the attack at the institute, he drove to the South and fired warning shots skywards in Chumphon province, he said.

Pol Gen Suchart said the gunman had apparently lost his temper at the convenience store on Soi Lat Phrao 25. There, he had a dispute with an employee after he refused to pay for a bottle of beer that he had accidentally dropped. He returned to the store and shot the employee dead at about 2.50am.

Later, he changed into a camouflage suit and went to the institute in Pathum Thani. (continue below) 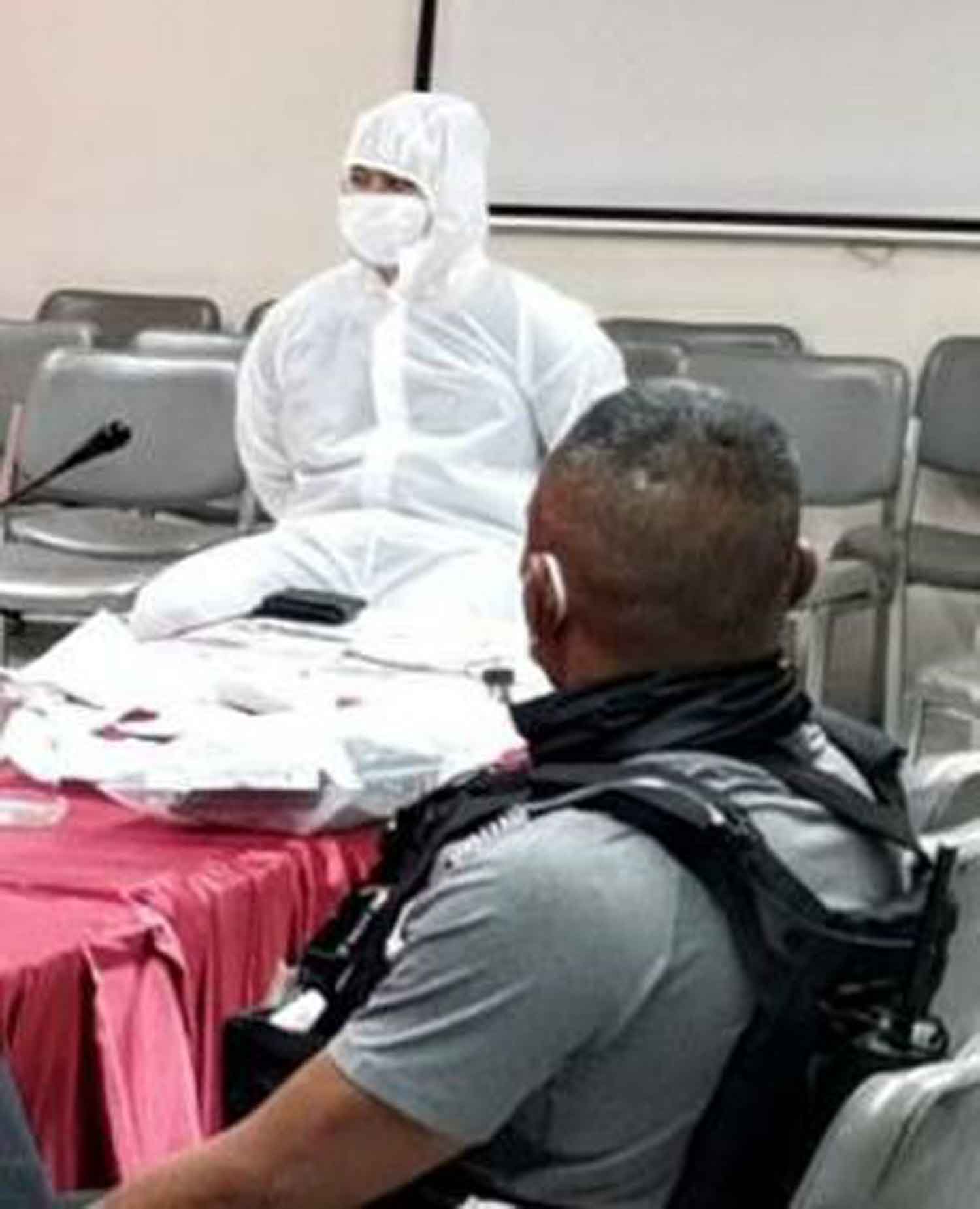 Kawin Saengnilsakul, 23, was dressed in a Covid-19 protective suit while being questioned at Pak Nam Ranong police station in Ranong province on Thursday. He surrendered at a relative's house in the southern province after murdering two people in Bangkok and Pathum Thani early Thursday morning. (Photo supplied)

The victim at the convenience store was identified as Rathawit Santikuptapong, 32. He was shot three times in the back.

The other victim at the field hospital was Suksant Saowapan, 54, who had been shot multiple times in the head in front of a toilet room.

His wife Romyen Boonsueb, 47, who lived in Ratchathewi district, Bangkok, said she and her husband had been treated for Covid-19 there. She was discharged on Wednesday while her husband was expected to be released by the end of this month.

She described her husband as being quiet and kind, and said her heart was broken to learn he was  a victim of the murder while being treated.