Singer's fall is latest drop in Covid's ocean of woe

Condolence messages continue to flood social media after the loss of a singer believed to be another indirect victim of the coronavirus outbreak.

Bang Khen police reported a woman falling from the third floor of a parking structure at a shopping mall in Saphan Mai area in Bangkok around 5pm on Saturday.

She was later pronounced dead.

The deceased woman was identified as Prakaifa Pooldoung, the vocalist of the band Pastel Season.

The news has shocked her supporters and sympathisers, and offers a sign of how difficult the lives of working musicians have been during the pandemic.

"You're in our memory forever," one posted a message on her Facebook account after the news spread.

"Fa has left us forever," another wrote and said she hoped it was untrue.

#Prakaifa in Thai was among top Twitter trends on Sunday.

Prakaifa and her band were admired for remaking other artists' songs in their own style. She was praised for the determination reflected in a Facebook post in May last year after the first Covid-19 wave had brought many activities in the country to a screeching halt -- including her career.

"Anybody out of a job please raises your hand," she wrote.

"I'm a professional musician who's been unemployed for two months. Every event was cancelled. Income = 0."

The vocalist, however, also said she believed every crisis held an opportunity and offered moral support to others in the same boat.

The reason for her death remains unconfirmed, but witnesses at the scene told police that they had seen her falling from the third level of the parking structure.

Several media outlets talked to her relatives, who said she was under stress because most entertainment venues had been closed since last year due to the pandemic. They believed that could possibly have led to a suicide.

Independent musicians have made numerous pleas for help from the government to allow live music in entertainment venues so musicians would have money to feed their families.

On the Facebook account "Dobasarure Drummer", Pastel Season's drummer on Sunday announced the end of the band. "Without her, there will be no more Pastel Season," he said. 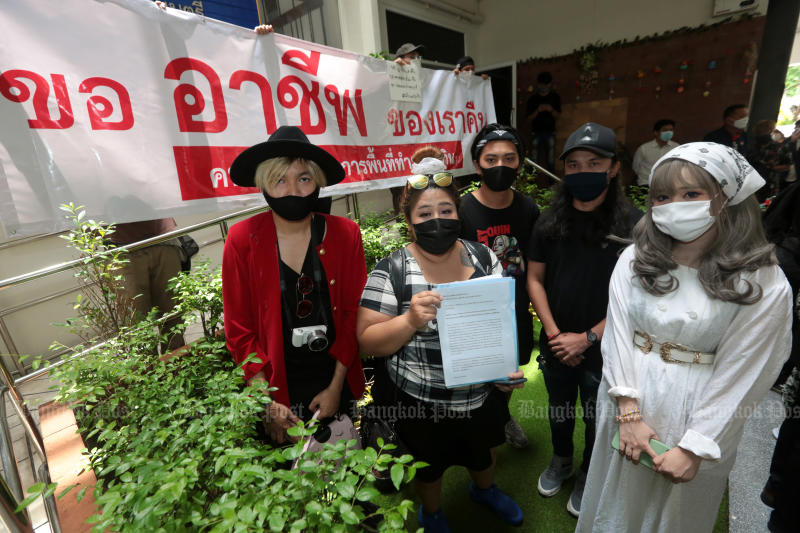 A group of singers and musicians show a copy of the petition they submitted to the government in June last year asking that live music be allowed so they could once again make a living. (Photo by Chanat Katanyu)