Tuk-tuk drivers, with their vehicles decorated with banners of K-pop stars, wait for customers in Bangkok on May 13, 2021. (Reuters photos)

Bangkok tuk-tuk taxi driver Samran Thammasa, 39, had never heard of K-pop star Jessica Jung before the coronavirus pandemic, but now the singer's Thai fans are helping him survive the loss of tourist customers.

His bright green three-wheeled motorcycle rickshaw has been mostly vacant for more than a year. In the past few months, though, he's earned about 600 baht a month to feature K-pop ads on his vehicle.

"The extra income may not be a lot for most people but it is for us," he said, glancing at a shimmering vinyl banner of Jung.

Drivers of Bangkok's distinctive tuk-tuks have been among the hardest-hit by the pandemic's devastation of the all-important tourism industry, left haunting corners of empty city streets complaining of mounting debt.

Mr Samran used to earn around 1,500 baht a day ferrying foreign tourists around Bangkok. Nearly all of that disappeared as visitor numbers fell by 85% in 2020, and the country is not expected to lift strict border controls for months yet.

Unexpected help came this year from Thailand's politically disaffected and K-pop-obsessed youth when they stopped buying ads celebrating their idols' birthdays and album launches from public transport, instead giving their ad money to grassroots businesses, including tuk-tuks and street food vendors.

Over the last few months, young fans have mobilised to put up banners of their favourite K-pop idols on the iconic vehicles for a month at a time, providing a new source of income for struggling drivers.

Mr Samran and many others now drive their empty tuk-tuks around Bangkok with a banner of a different K-pop sensation each month, stopping for young Thai fans to take pictures and use their service, often with tips. 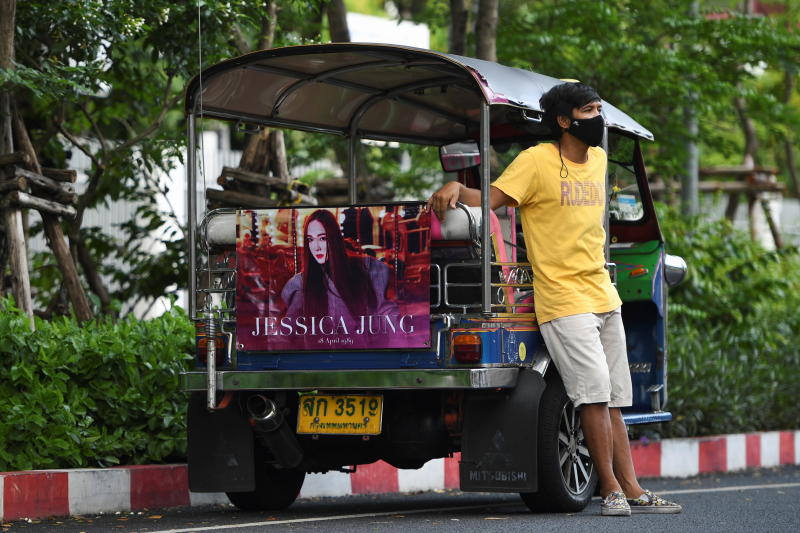 Tuk-tuk driver Samran Thammasa stands next to his vehicle decorated with a banner of K-pop star Jessica Jung, as he waits for customers in Bangkok on May 12, 2021.

So far, the initiative has benefited several hundred tuk-tuk drivers. There are more than 9,000 tuk-tuks registered in Bangkok, according to government data.

The trend has roots in anti-government protests last year that drew tens of thousands of students calling for Prime Minister Prayut Chan-o-cha - who first came to power in a military coup - to step down.

Many K-pop fans were protesters themselves, and last year vowed to pull huge billboard advertising fees from Bangkok's skytrain and underground subway services -- a longstanding lighthearted tradition for different fan groups -- after mass transport shut down to try to prevent students from reaching protest sites.

The fans started printing vinyl or cardboard signs and recruiting tuk-tuk drivers at garages and on the street -- funnelling their ad funds to the people who need it most.

"It's a political expression that we don't support capitalists. This marked a change from us competing to book skytrain and subway billboards, but now it's tuk-tuks," said Pichaya Prachathomrong, 27.

The "Tuk Up" service, created by 21-year-old university sophomore Thitipong Lohawech, was initially to help dozens of drivers who rented vehicles from his family's garage. But now it supports about 300 drivers from all over Bangkok.

"The fans are distributing income to the grassroots, which helps drive social change and support the economy," said Mr Thitipong.

Drivers said they have seen little of the government's approved relief of around 967 billion baht, as handouts were mostly only accessible via a mobile wallet application.

"By the time the money reaches us, we're nearly dead," said Pairot Suktham, a 54-year-old driver who like many others doesn't have a smartphone.

"The fans are our life support system and give us hope to keep fighting." 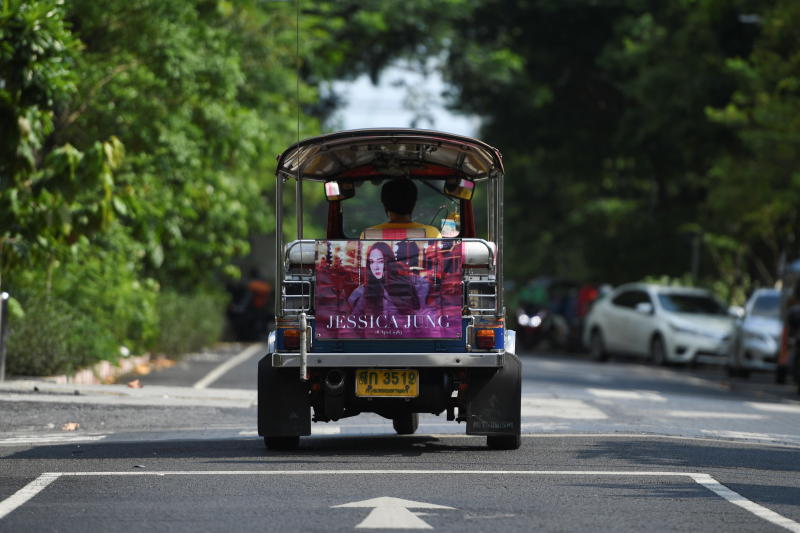 Tuk-tuk driver Samran Thammasa rides his vehicle decorated with a banner of K-pop star Jessica Jung in Bangkok on May 12, 2021.