The government is set to impose tougher measures to slow the rising rate of Covid-19 transmissions, including restricting people's movements, as new daily cases topped 7,000 on Thursday.

Approval for the measures, proposed by the Public Health Ministry, will be sought from the Centre for Covid-19 Situation Administration (CCSA) today.

Prime Minister Prayut Chan-o-cha said he was following the Covid-19 outbreak with concern and wanted to come up with suitable containment measures. 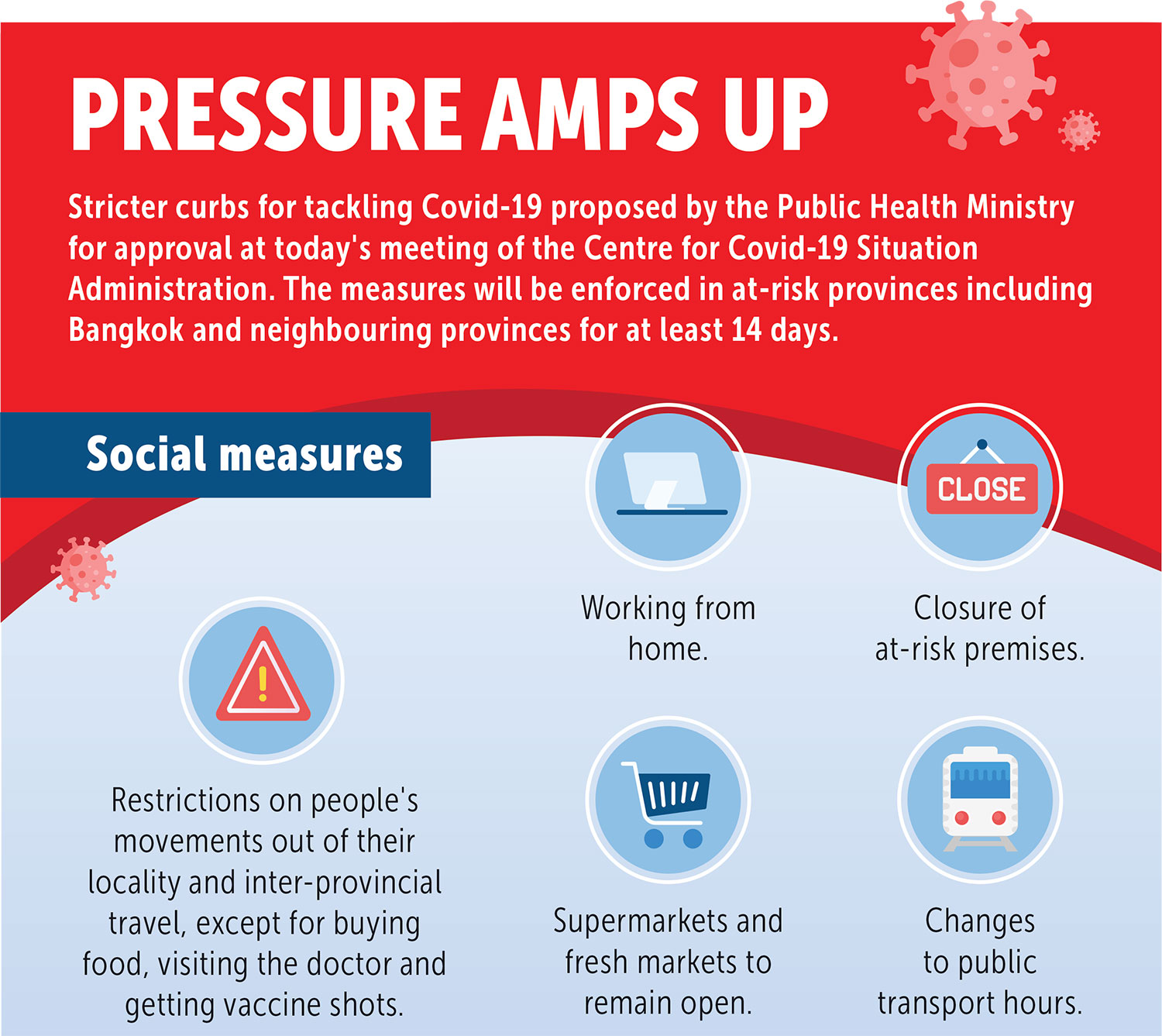 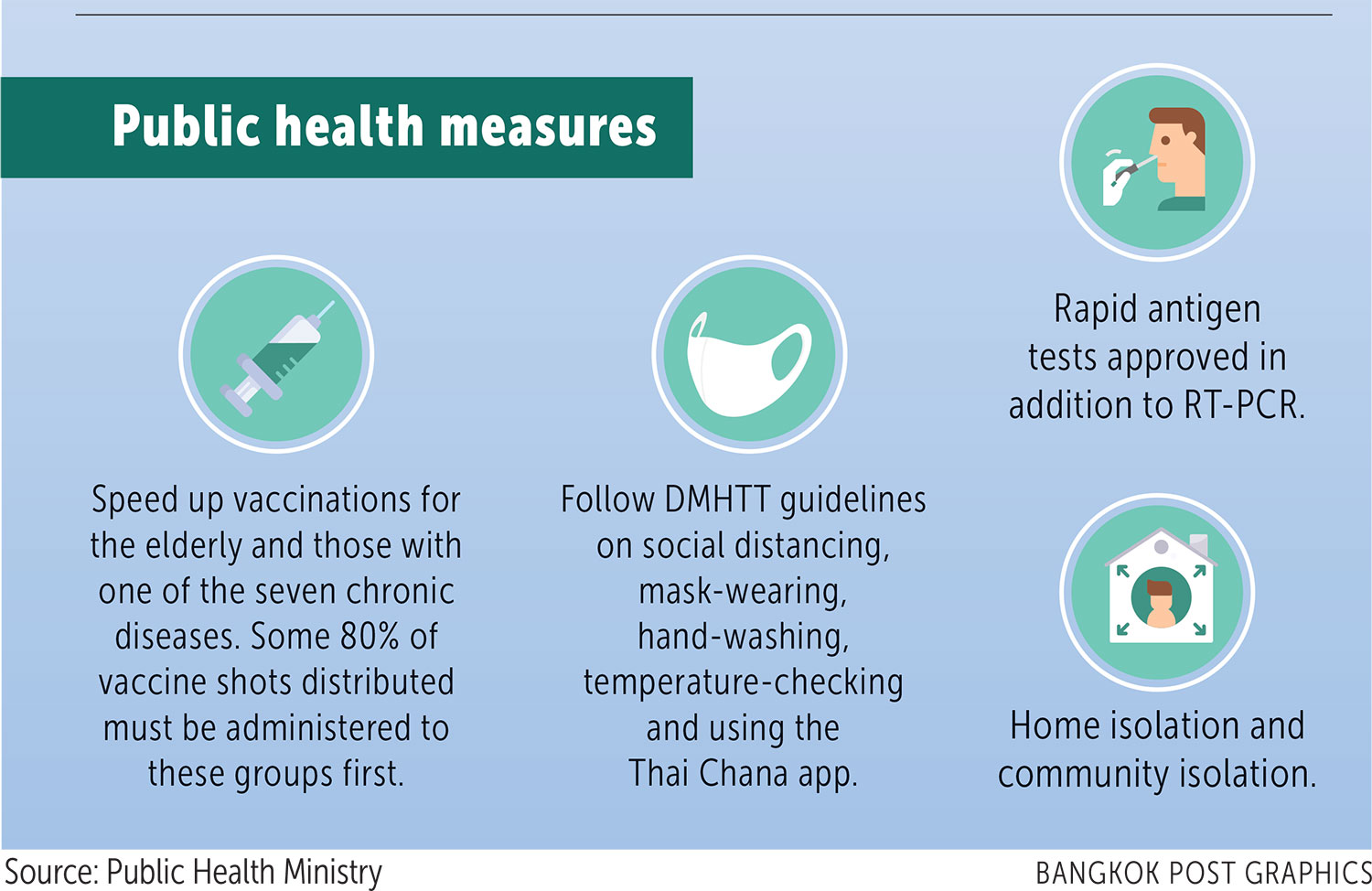 "We may have to take stricter measures to restrict movements to prevent crowd gatherings and close additional premises.

"As the director of the CCSA, I will chair the CCSA meeting to consider proposals submitted by the parties involved. I will inform you of the outcome immediately," the prime minister wrote on Facebook.

"The government and I will do our best to bring the situation under control as quickly as possible," he said.

Speaking after the meeting, Kiatiphum Wongrajit, permanent secretary for public health, said the proposal, which will be imposed for 14 days in at-risk provinces including Bangkok and neighbouring provinces, includes restrictions on people's movements to discourage them from going out, except for buying food and visiting the doctor, and receiving vaccine shots. Inter-provincial travel will also be banned.

Other measures include shuttering at-risk premises and locations where people gather for certain activities. Supermarkets, fresh markets, and premises that are essential to daily lives will remain open.

"The Public Health Ministry wants to present measures to curb transmissions so the public health system will be better able to take care of patients," Dr Kiatiphum said.

Asked if the tougher measures are tantamount to a lockdown, he said: "We don't want to create confusion because a lockdown, which was imposed previously, also included a ban on foreigners visiting Thailand."

"But the main thrust of the new measures will be to restrict people's movements and close at-risk premises," he said.

He said the new measures will be as tough as those enforced in April last year.

Apisamai Srirangson, assistant spokeswoman for the CCSA, said officials from the Interior Ministry and the Defence Ministry will set up checkpoints to reduce interprovincial movements.

She said the Public Health Ministry also proposed a maximum degree of working from home for both the government and private sectors.

Businesses would be asked to change their operating hours to discourage people from going out, she said, referring to department stores, convenience stores and night-shift markets and eateries.

"The Public Health Ministry did not mention any lockdown measures, but discussed changes to operating hours of businesses and services in specific areas and provinces," Dr Apisamai said.

Meanwhile, a record 75 Covid-19 fatalities and 7,058 new cases were reported on Thursday, as the continuing surge in Covid-19 cases spread to provinces throughout the kingdom.

There were new 6,990 cases in the general population and 68 among prison inmates, the Ministry of Public Health said.