The departure hall at Suvarnabhumi airport is almost completely deserted on Monday after the Civil Aviation Authority of Thailand banned airlines from operating fligths to and from 'dark red' zones, including Bangkok, on Sunday. (Photo: Wichan Charoenkiatpakul)

Checkpoints are being set up to restrict people's movements in 13 'dark red' zone provinces in a bid to control the severe wave of Covid-19 infections, according to the Centre for Covid-19 Situation Administration (CCSA).

Dr Taweesilp Visanuyothin, spokesman for the CCSA, said checkpoints will be up and running in the 13 provinces and along roads linking the 13 provinces with their neighbours around the clock as tighter restrictions come into force on Tuesday. 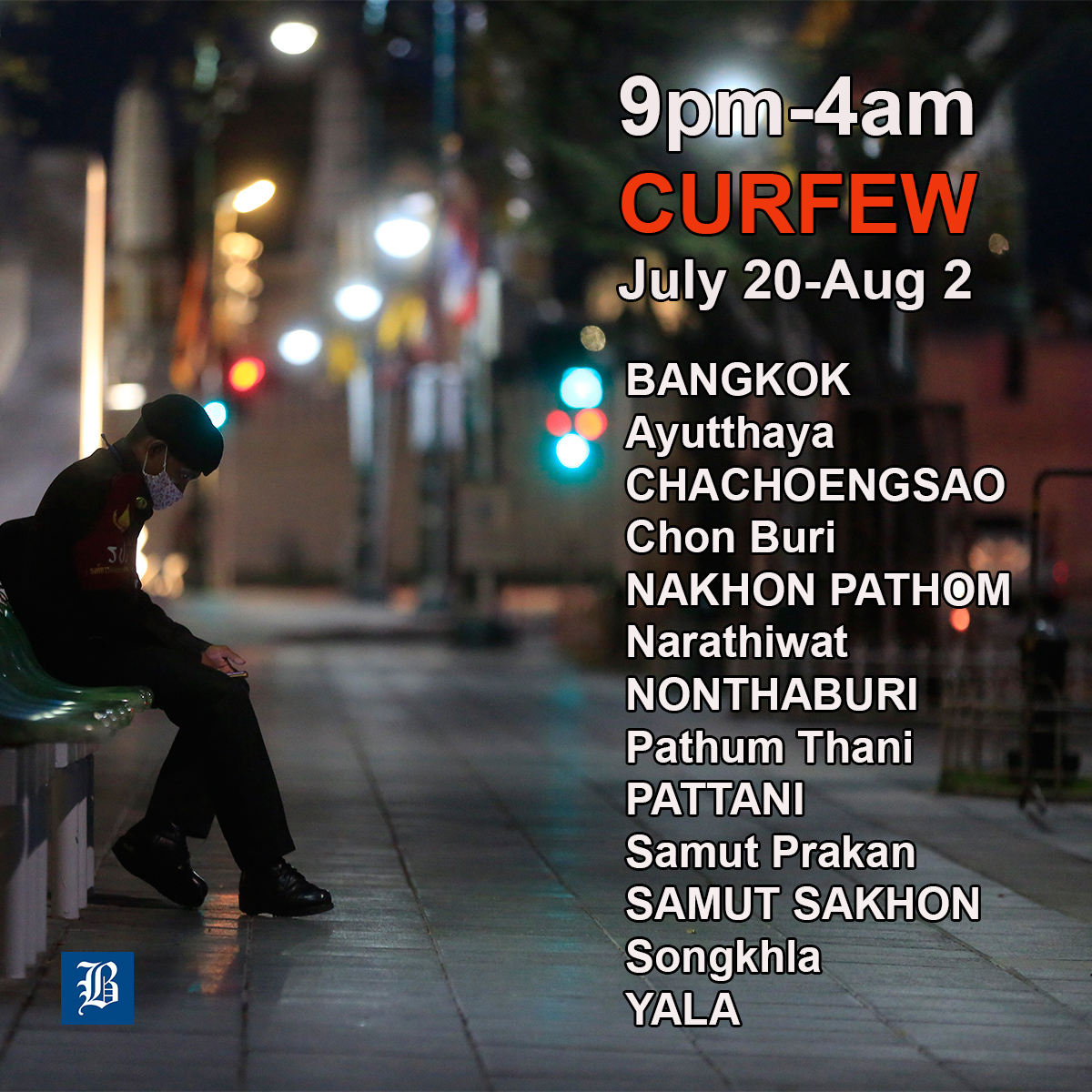 Dr Taweesilp said people need to show required documents when passing through the checkpoints, including ones that display QR codes when they register with https://covid-19.in.th

"Any inconveniences are to restrict travel," he said. "Unless totally necessary, don't leave home."

"You can expect inconveniences [should you travel]," Dr Taweesilp said.

The movements of people in the 13 provinces will be restricted, while those who seek to visit 'dark red' zones must have a proper reason and will be screened upon entry, he said, adding that the toughened measures will be in place for at least 14 days or until Aug 2.

All but three have been in lockdown since July 12. Chon Buri, Chachoengsao and Ayutthaya were designated as 'dark red' zones on Sunday.

Members of the public in these maximum control zones are urged to work from home and avoid unnecessary travel even outside the 9pm-4am curfew hours.

Shopping malls, department stores and community shopping centres are closed except for supermarkets, drug stores and vaccination stations in their premises. 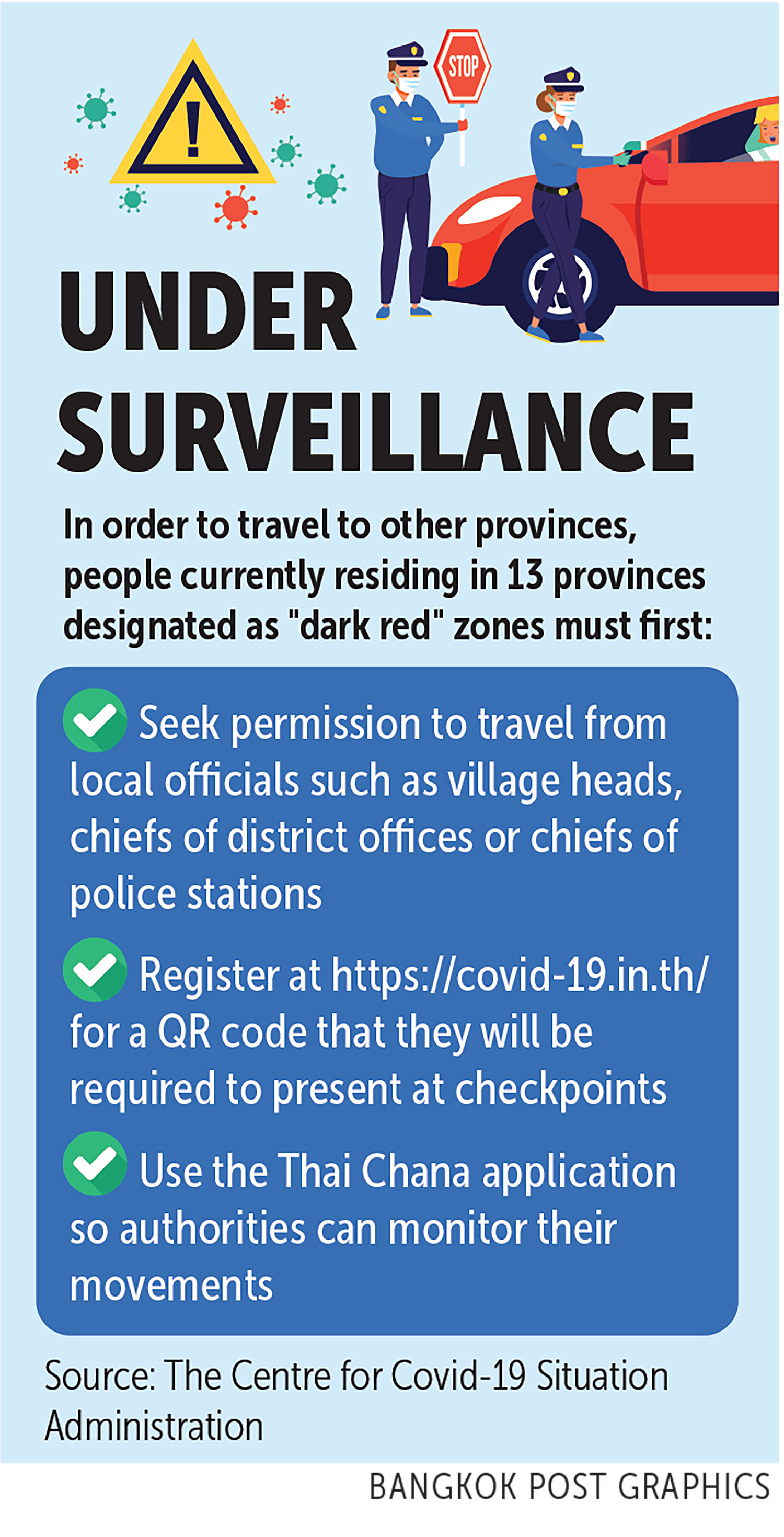 Six groups of people and businesses are exempted from travel restrictions for reasons of public health and the transport of essential goods.

Dr Taweesilp also confirmed an announcement by the Civil Aviation Authority of Thailand saying domestic flights out of Suvarnabhumi and Don Mueang airports would stop operating from tomorrow.

He said the capacities of public transportation services will be halved from tomorrow.

"We'll go full throttle in the next 14 days," Dr Taweesilp said. "The surge in infections is mostly in these provinces and if the toughened measures work, [new] Covid-19 cases are expected to decline."

Citing projections from Mahidol University's faculty of environment and resource studies, Dr Taweesilp said the daily caseload would rise to almost 32,000 cases if action was not taken.

Based on the projections, with interventions to curb the virus transmission, the daily caseload would now be between 9,018–12,605, he said. 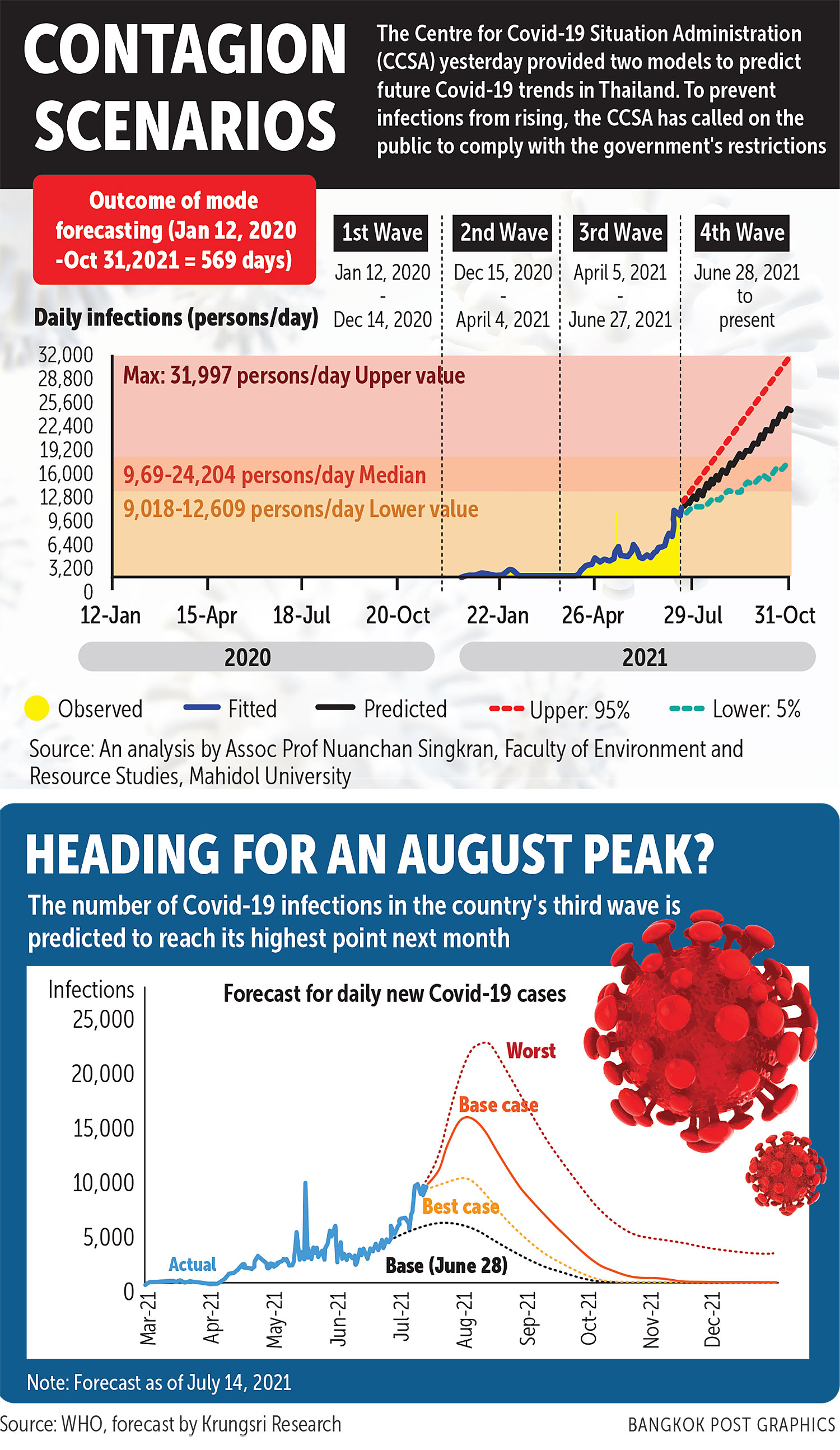 The country on Monday recorded an all-time high of 11,784 new Covid-19 cases, along with 81 fatalities. Monday marked the fourth consecutive day the new caseload broke records, with the previous daily high of 11,397 reported on Sunday.

The capital recorded 26 deaths, while the remainder were distributed among 26 other provinces, according to the CCSA.

The board of the National Health Security Office on Monday approved a plan to procure more than 8.5 million rapid antigen test kits worth about 1 billion baht for distribution to the public.