An overweight man is vaccinated against Covid-19 at Bang Sue Grand Station, which now provides services for three groups without bookings. They are people who weigh 100kg or more, women who are 12-weeks pregnant or more and people aged 60 and over. (Photo: Chanat Katanyu)

There were a record 14,575 new Covid-19 cases, and 114 more fatalities, on Thursday, the Public Health Ministry reported on Friday morning.

There were 13,503 cases in the general population and 1,072 among prison inmates.

This compares with 13,655 new Covid-19 cases and 87 fatalities nationwide on Wednesday, reported on Thursday.

Over the past 24 hours, 7,775 Covid-19 patients were diagnosed recovered and were discharged from hospitals.

The death toll was at 3,717 in the third wave and 3,811 from the beginning of the pandemic early last year.

The previous high of daily Covid-19 cases was at 13,655 on Thursday when the country logged 87 new fatalities.

Apisamai Srirangson, a spokeswoman for the Centre for Covid-19 Situation Administration, said in the afternoon briefing that the 114 deaths were aged 14-94 years and three of them died at home. The teenager was bed-ridden and suffered from epilepsy.

Of the latest fatalities, 111 were Thais and the rest were from Myanmar, Cambodia and Pakistan. Fifty-eight had hypertension and 38 had diabetes, but 11 had no chronic illness. Fifty-nine either lived in or visited outbreak areas and 23 caught the virus from other family members.

The largest number were in Bangkok, 49, while there were 12 deaths in Pathum Thani, 11 in Samut Prakan, six in Samut Sakhon, three each in Yala, Surat Thani, Roi Et and Ayutthaya, two each in Loei, Chaiyaphum and Ang Thong, and one each in Nakhon Pathom, Narathiwat, Songkhla, Trang, Nakhon Si Thammarat, Ranong, Khon Kaen, Nakhon Ratchasima, Si Sa Ket, Uttaradit, Phetchaburi, Saraburi, Chanchoengsao, Trat and Sa Kaeo.

On Thursday 143,744 people received treatment for Covid-19 at hospitals – 81,808 at conventional hospitals and 61,936 at field hospitals. Among them, 3,984 suffered lung inflammation and 900 were dependent on ventilators. 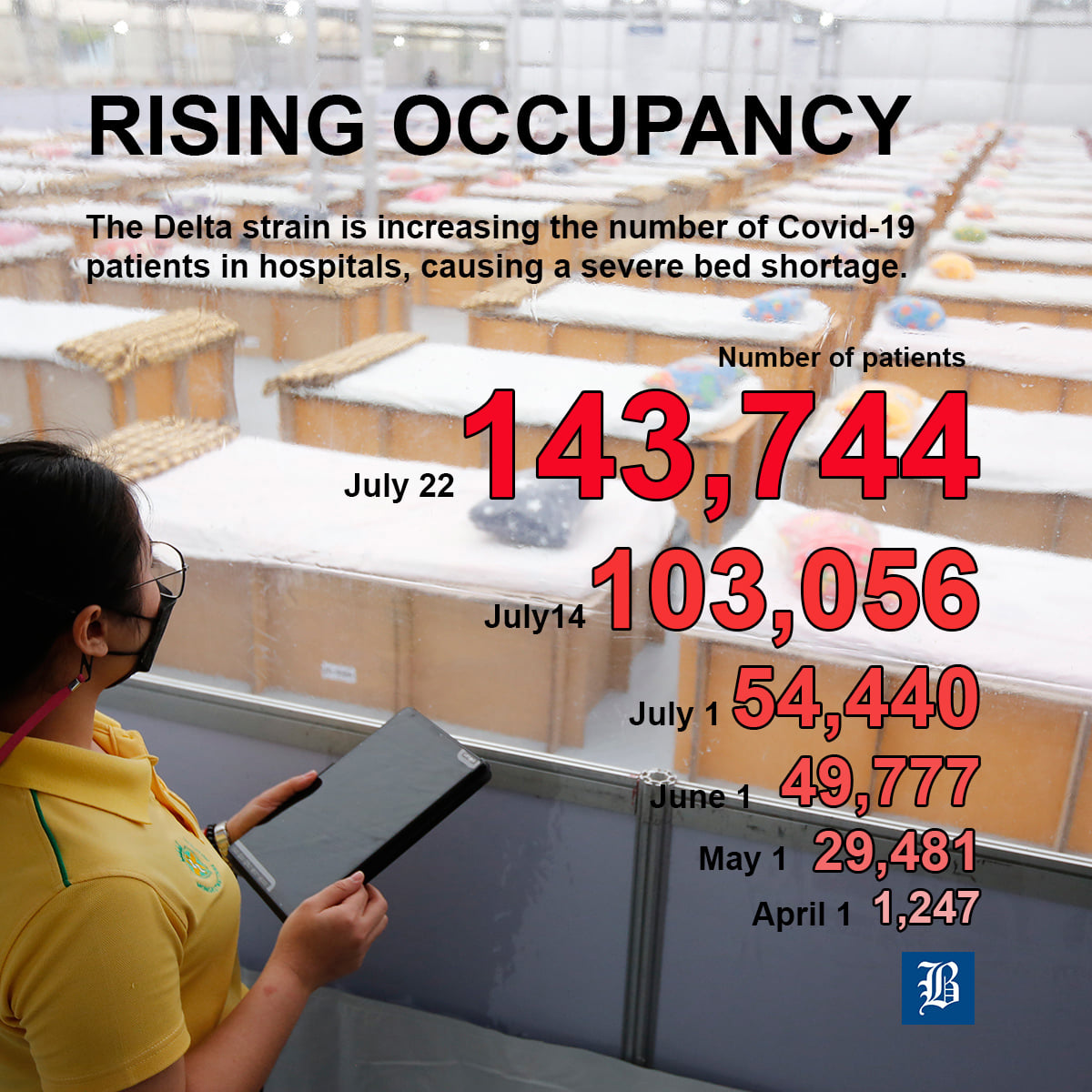 Dr Apisamai said Covid-19 cases were rising in the US, in European countries and in Thailand's neighbours. She said the United Kingdom, where the inoculation rate was quite high, recorded 39,906 new cases, Malaysia had 13,034 new cases, Myanmar 6,701 and Vietnam 6,194.

Over the last seven days, Thailand had 1,156 cases and 10 fatalities per 1 million population while the rates were at 2,565 cases and 29 deaths in Malaysia and 4,724 cases and six deaths in the UK, Dr Apisamai said.