The Ministry of Public Health is urging the public to comply with lockdown measures, saying that just a 5% increase in adherence to the government's guidance coupled with the ongoing vaccination of vulnerable groups could see case numbers begin to fall dramatically in the coming weeks.

Dr Kiattiphum Wongrajit, public health permanent secretary, said that both infection and death totals were trending closely with government modelling, and it would only take a small swing further in the direction of prudence to bring Covid-19 under control in Thailand. 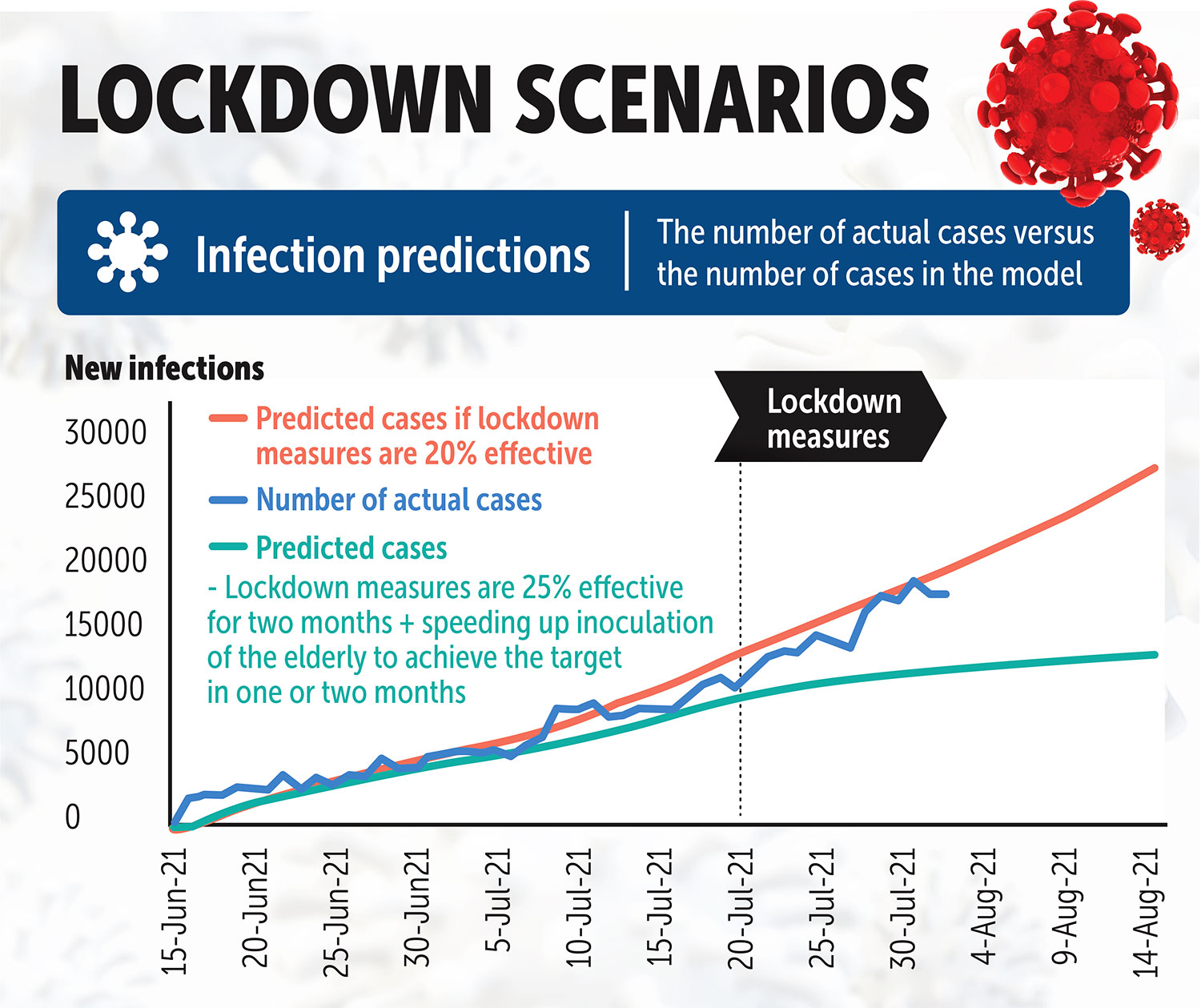 He said that stronger cooperation from the public is needed to reduce transmission in the most affected provinces as people have been notably more mobile during this year's lockdowns.

If people can be persuaded to adhere to lockdown measures just a little more rigorously, and with the aid of a stepped-up vaccination campaign among at-risk groups, the number of cases and deaths would be significantly reduced, he said.

"At this point, we must work together to contain the outbreak. We'd like to ask every sector to comply with lockdown measures, whether even just avoiding travelling to meet people. This will push down the infections and fatalities," he said.

The call came as the ministry gave an update following two weeks of toughened Covid-19 restrictions including a curfew in 13 of the worst-hit provinces.

The measures were initially enforced in Greater Bangkok -- Nonthaburi, Samut Prakan, Samut Sakhon, Pathum Thani and Nakhon Pathom, as well as the four southernmost provinces of Pattani, Yala, Narathiwat and Songkhla from July 12.

Chon Buri, Chachoengsao and Ayutthaya were later added on July 20 and the original deadline expired on Monday. 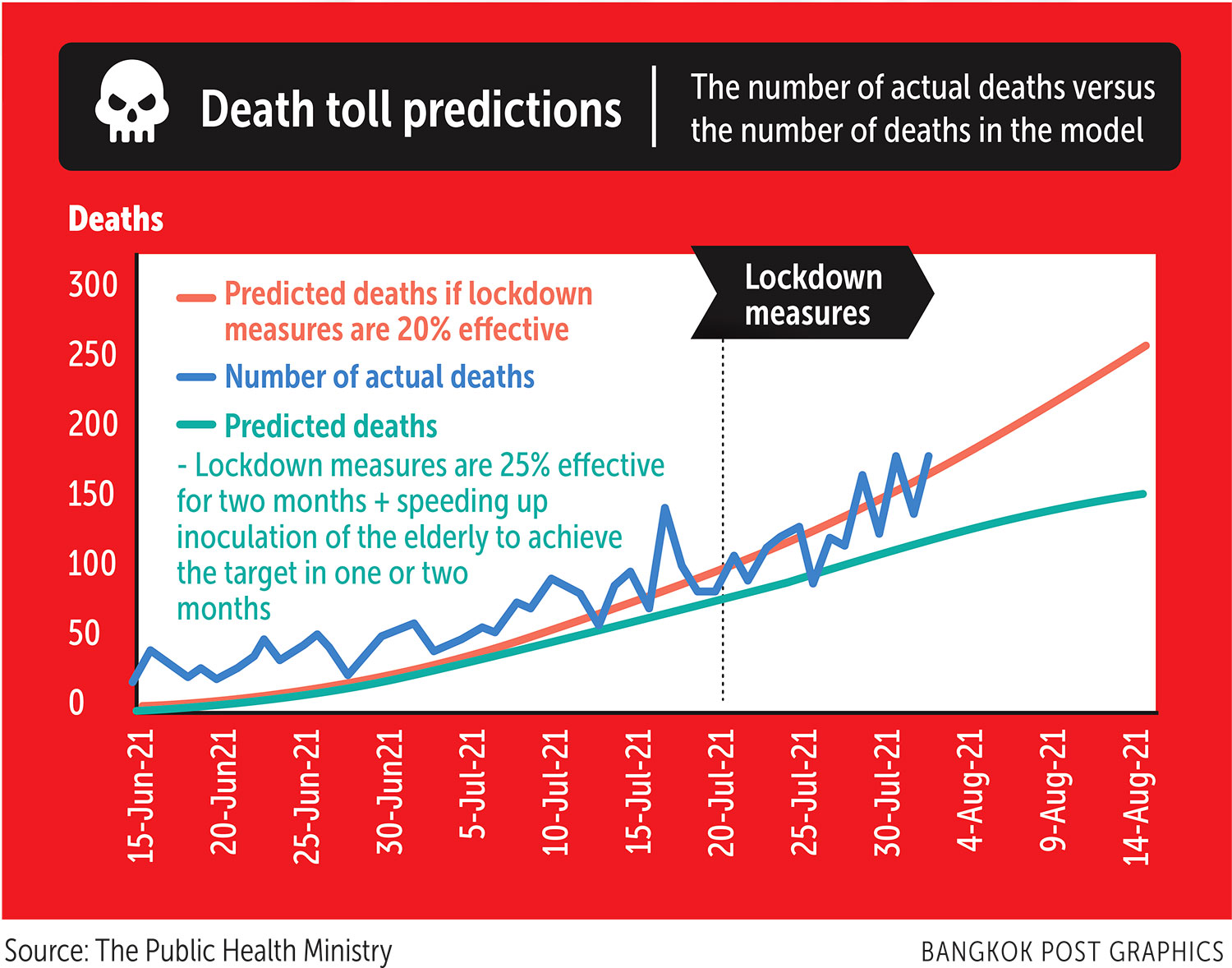 According to the permanent secretary, the lockdown must be tightened, with all movements and assemblies of people further reduced in order to stem an infection rate that is currently close to 20,000 new cases per day.

Without the hoped-for dampening of the contagion, the government has imposed lockdowns in a further 16 provinces and will keep all measures in place for at least two more weeks.

To help curb the spread of Covid-19 more effectively, Dr Kiattiphum urged the public to give the attempts by authorities to isolate and starve the virus of new victims their full cooperation, as happened during the first wave and the first lockdown in April last year.

"Please be patient and help us reduce mobility. If we can do it, we will see the situation improve over the coming month in the capital and weeks following in other provinces," he said.

He said that as 75-80% of deaths were among the elderly with underlying health conditions, this was the demographic the government was concentrating on vaccinating as its top priority.

Dr Kiattiphum also said both state- and private-run hospitals were almost at full capacity. In Bangkok more than 90% of its 41,659-bed capacity are currently taken, he added.

He went on to say that the provinces would be allocated more vaccines this month as resources were freed up now the huge initial effort in the capital had begun.

Dr Sophon Iamsirithavorn, deputy director-general of the Disease Control Department, stressed that if the public comply with the restrictions in their respective zones, it should be sufficient to contain the outbreak.

According to the ministry, people managed to reduce the frequency and duration of their trips out by 80% last April. This year, estimates put that figure at closer to 70%, he said.

Dr Sophon also noted that the change in strains, particularly the new, more contagious and severe Delta variant, had seen the number of onward infections per victim rise from three to eight.

Greater Bangkok – comprising the capital and its five surrounding provinces -- logged 122 of those 178 fatalities.

Of the 17,970 new cases recorded nationwide on Sunday, 17,795 were among the general population and 175 among prison inmates.

The CCSA also warned about a surge of new cases in 71 provinces, with their combined cases already outnumbering those in Greater Bangkok as many of the capital's infected head home for treatment.

"The number of infected persons in those provinces will continue to rise," CCSA assistant spokeswoman Dr Apisamai Srirangson said.

KANCHANABURI: A 27-year-old man died in a hail of bullets as he fled a gunman who stopped a vehicle driven by a 50-year-old woman he was travelling with in Muang district on Monday morning.

Prime Minister Prayut Chan-o-cha will visit Udon Thani province in the upper Northeast on Wednesday for a meeting with representatives of the public and private sectors on provincial development and opening of the province to tourists under the Udon Plus model, government spokesman Thanakorn Wangboonkongchana said.