Outside Din Daeng police station on Tuesday morning, after police and anti-government protesters clashed there on Monday night. (Photos by Nutthawat Wicheanbut)

Police have denied firing live ammunition at protesters of the Thalu Fah group during chaotic scenes in front of Din Daeng police station on Monday night, saying only rubber bullets were used to prevent them causing much damage.

Rajavithi Hospital announced on Tuesday morning it had found a bullet lodged in the head of a seriously wounded young protester rushed there by ambulance on Monday night. He remained in a coma.

The Metropolitan Police Bureau said in a statement on Tuesday that the man was shot at Din Daeng intersection, heading in the direction of Prachasongkroh intersection, a few kilometres from the police station on Mit Maitri Road.

It was not known who shot him and the man was not carrying any ID. 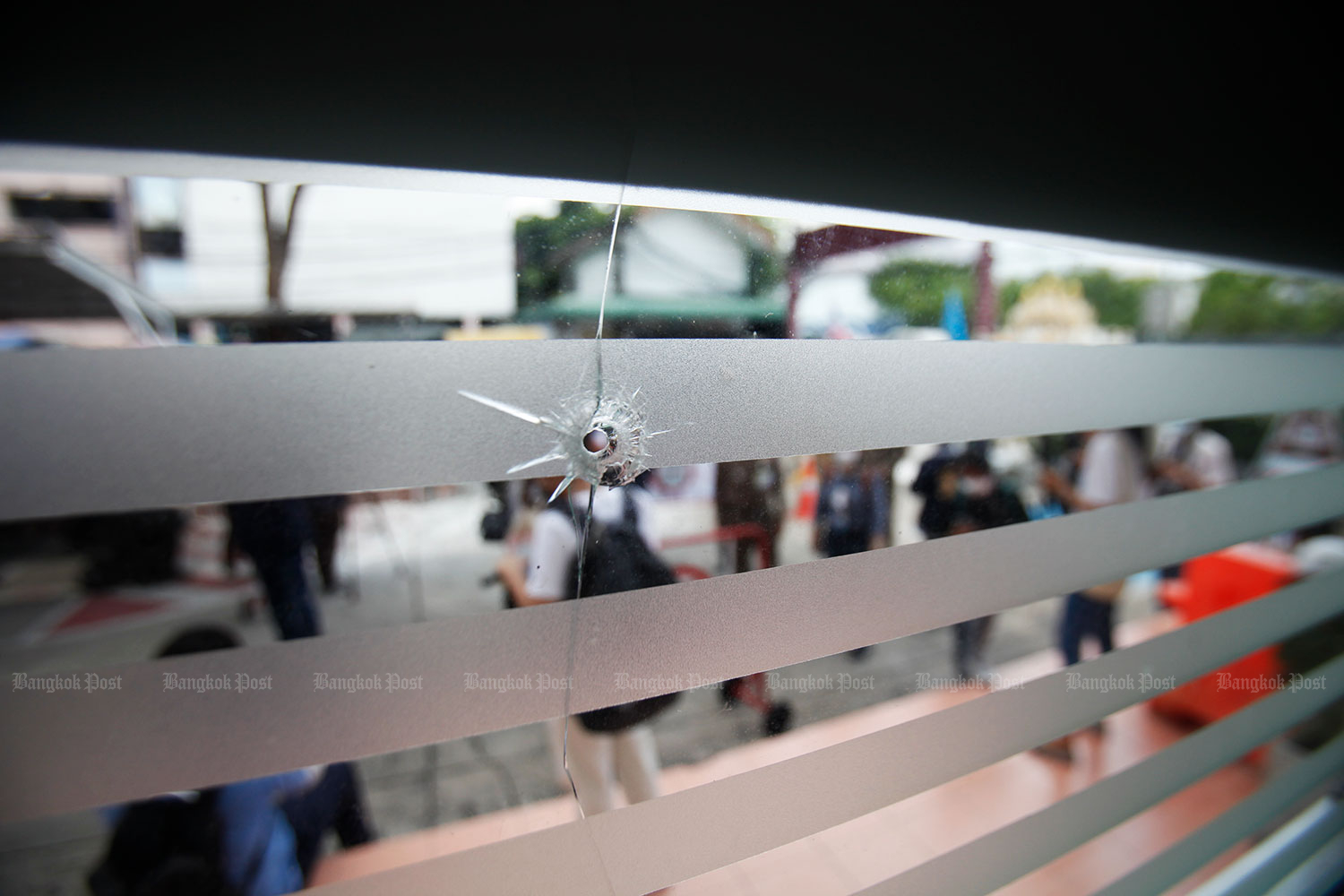 He was responding to a video clip posted on the social media with a voice-over alleging that about 8.45pm Din Daeng police opened fire at the protesters with live ammunition and some protesters were hit.

He insisted police at the station at the time fired only rubber bullets at the protesters, to prevent them causing chaos and damage to state property.

Police were gathering evidence to take legal action, he said.

Pol Col Rathachai said he would prepare a report for his superiors on the posting of the online video and voice-over allegation.They would decide whether it constituted a violation of the Computer Crimes Act.

During the confrontation with the protesters, one policeman collapsed from exhaustion and had breathing difficulties. Pol Sgt-Maj Chaiyakorn Huparaksa was rushed from under the Din Daeng-Don Muang expressway to the Police General Hospital.

Three of them reportedly had bullet wounds. They were an unidentified man, about 20 years of age, who was admitted to Rajavithi Hospital; Supat Wathanakul, age not known, admitted to Petcharavej Hospital; and, Thanapol Homya, 14, admitted to Chulalongkorn Hospital.

On Tuesday morning, bags of mangosteen, broken glass and bottles and other objects left by the protesters were still scattered on the ground in front of Din Daeng police station.

A front window of the station had four big holes in it.

Local residents said the scene in front of the police station was chaotic after protesters arrived about 7pm and clashed with riot-control police.

They said a young man, about 20 years of age, was injured and rushed to a hospital by rescuers, but it was not clear whether his injury was from a gun shot.

Rajavithi Hospital announced on Tuesday that a 20-year-old man was brought to the hospital by a Ruam Katanyu Foundation ambulance on Monday night. He did not have any identification documents on him.

According to the announcement, the young man was not breathing on arrival at the hospital. There was a bullet wound in the left side of his neck. Doctors performed emergency CPR and after about six minutes he started showing vital signs again.

A computerised brain x-ray showed a bullet lodged in the man's brain stem. The first and second neck vertebrae were fractured.

As of 9.40am on Tuesday, he was still in a coma and on a ventilator. His vital signs were steady.

The man was in the care of a team of brain and nerve surgeons, the hospital said.

The hospital would keep the public informed of his condition, the announcement said.