Din Daeng residents get respite from nightly violence, but clashes with protesters erupt nearby

Young people light fireworks and flares during a clash with police on inbound Vibhavadi Road on Saturday night. (Photo by Wichan Charoenkiatpakul)

Clashes between young people and riot police continued near Din Daeng on Saturday even after police moved walls of containers blocking inbound Vibhavadi Road and changed their tactics for dealing with protesters there.

Dozens of teens rode up Vibhavadi Road unimpeded on Saturday evening after the barrier was moved one kilometre away to an area near the 1st Infantry Regiment where Prime Minister Prayut Chan-o-cha — the object of the demonstrators’ anger — resides.

As they have for several nights running, police used water cannon and rubber bullets to drive the protesters back to Din Daeng and set up a defensive line in front of the Veterans General Hospital.

Earlier in the day national police chief Suwat Chaengyodsuk said the force’s policy for handling protesters at several locations would be changed, especially in Din Daeng and the adjacent Victory Monument area.

From now on, he said, police have been told not to enter residential properties, communities or small sois and to focus only on maintaining order on main roads and preventing arson.

The stacks of used containers put up to block access to Vibhavadi Road — seen by some as a red flag that simply incited protesters further — will also be removed, he said.

The police chief also vowed to investigate incidents in which police were captured on camera shooting a young man on a motorcycle at close range and spraying rubber bullets on the ground floor of a Din Daeng flat.

He urged empathy for police on duty who have been working under pressure, saying that different kinds of weapons have been used by the teens.

“We already talked to the parents of these young people and found most of them are not living in the area and come from Greater Bangkok,” he said.

The announced change came as residents at the Din Daeng flats complex said they would submit a letter on Tuesday to the National Police Office and the prime minister in protest against the handling of the situation and the way it has affected their lives. At least 1,000 names of affected people were included in the letter.

Prasong Homsanan, a member of the complex’s committee, told reporters on Saturday that people living in blocks 1-4 had been affected by the nightly clashes.

“Rubber bullets were shot into their rooms. Some who were outside were also hit by the bullets although they were not protesters,” he said. “It can be said we Din Daeng people have been dining amid tear gas every day now.”

He added that the barrier should be moved to the 1st Infantry Regiment.

“Putting the barrier here invites protesters to come here. Moving it elsewhere will also enable elderly people at the flats to go to the hospital across the road,” he noted.

For seven nights in a row, clashes between riot police and young people took place in Din Daeng. They have involved the use of fireworks, catapults, marbles, projectiles and laser beams by the protesters — and rubber bullets, water cannon and tear gas by the police.

Dozens of people have been injured during the clashes. While both sides denied the use of live rounds, at least three teenagers have been shot and one of them is still in a coma. One policeman was also hit in the leg by a projectile that might have been a live round.

Apart from traffic congestion, residents in the area also complained about cases of “hot pursuit” where police reportedly fired rubber bullets indiscriminately into nearby flats where the protesters had fled to. Some passers-by were also hit.

A doctor complained that the clashes were also posing a danger to patients and health workers in nearby hospitals.

The leaders of anti-government protest groups, who have staged several rallies to protest against the government's mishandling of the coronavirus pandemic, have urged people not to resort to violence and not to provoke the police as they are not the real "enemy".

But while the mainstream protest groups tend to be middle-class, media-savvy and well-educated, those who have been gathering near Din Daeng tend to be working-class youth who are angry about the state of the country and their lives in general. 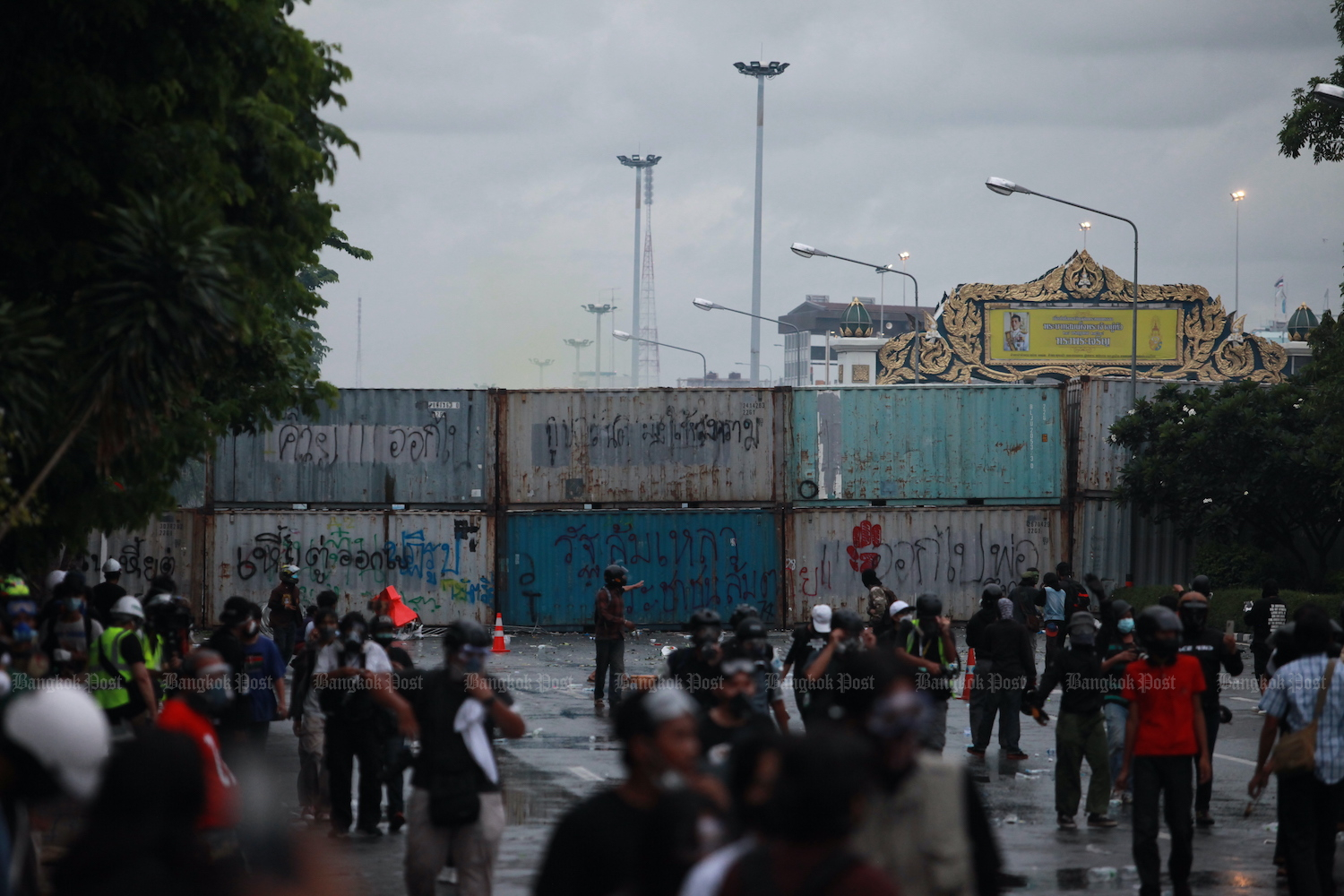 Containers placed at the Din Daeng intersection had kept demonstrators from advancing closer to the army base where Prime Minister Prayut Chan-o-cha lives. But their presence has tended to make the young protesters even more determined. (Photo: Apichart Jinakul)

The separatist BRN movement claims responsibility for the wave of attacks on convenience stores in the far South, saying these chain stores are destroying the economies of local communities.