Residents of the Prueksa 15 housing estate in Samut Prakan prepare ginger water to be distributed free to households within their community on Monday. Ginger water is believed to boost the body's immune system and ease Covid-19 symptoms. (Photo: Somchai Poomlard)

The government's plan to reopen the country before the end of the year is seemingly still on track as Thailand's Covid-19 outbreak is showing signs of slowing down.

It will soon be considered by the Centre for Covid-19 Situation Administration (CCSA).

In light of this, the National Communicable Disease Committee (NCDC) will ask the CCSA to consider reopening some areas of the country, in line with the pledge made in June by Prime Minister Prayut Chan-o-cha to do so in 120 days.

During a live TV broadcast to the nation on June 16, Gen Prayut said his government planned to reopen the country within the next 120 days. The statement was made despite the risk of a rise in Covid-19 infections.

Speaking after the committee meeting on Monday, Opas Karnkawinpong, director-general of the Department of Disease Control (DDC), said the committee agreed on four issues that will be presented to the CCSA for consideration.

One of the issues involves preparing for a safe reopening of the country under disease control measures known as "Smart Control and Living with Covid-19", which aim to contain the pandemic so new cases will not overwhelm the public health system, he said.

"We will now have to learn to live with Covid-19 with the knowledge that [Covid-19] will be an endemic disease, confined to a particular country," Dr Opas said.

One key strategy involves vaccinating at-risk groups, such as the elderly and those with underlying health problems; developing new vaccines; taking preventive measures and precautions at all times; and stepping up the work of Covid-19 comprehensive response teams (CCRT) visiting communities, Dr Opas said. 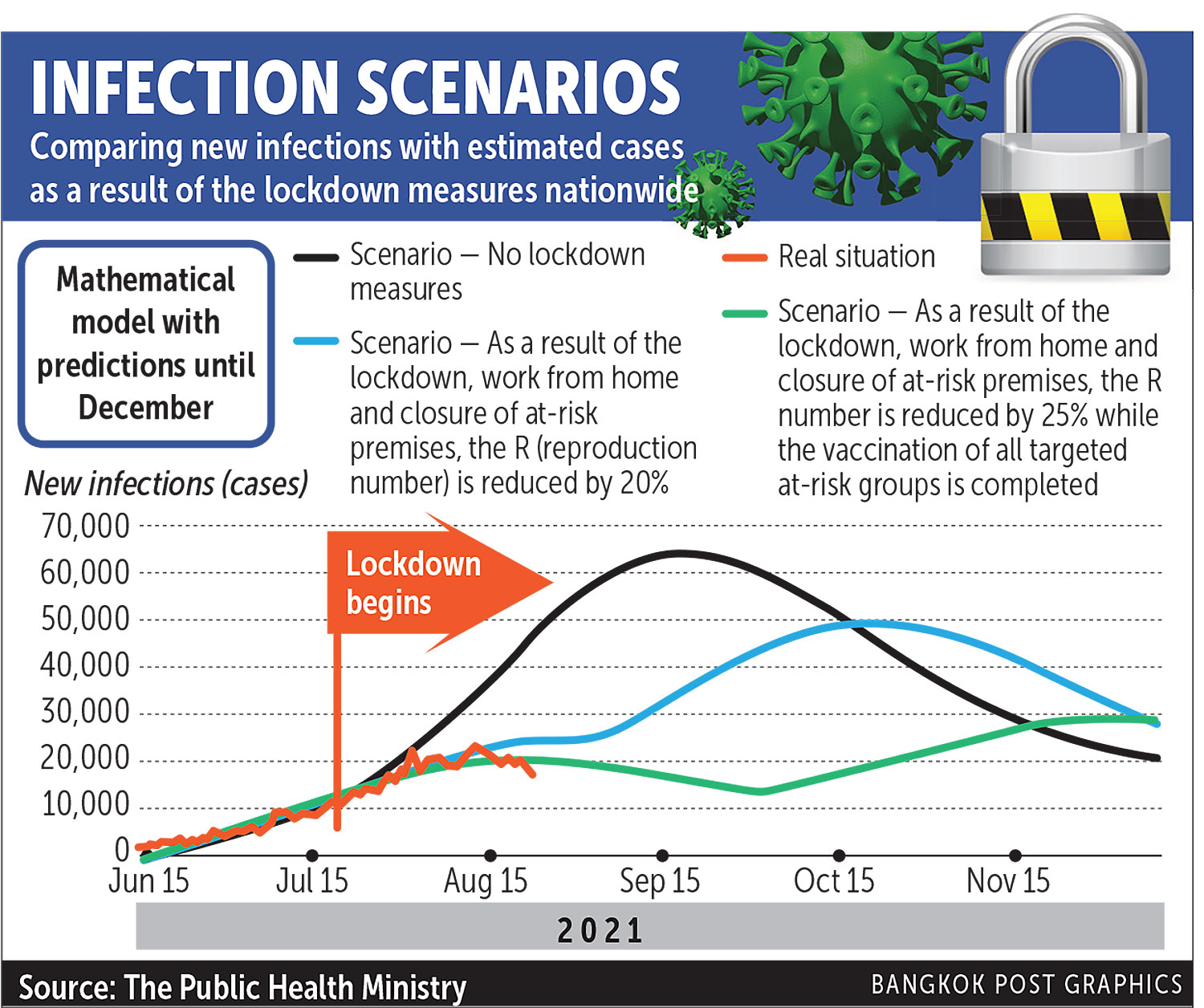 The committee also agreed with the planned bubble-and-seal approach for factories where clusters of Covid-19 infections were detected to curb transmissions, he said.

If more than 10% of workers are found to have Covid-19, they will be isolated at field hospitals, while the rest of the employees will be allowed to continue to work on the premises under close surveillance, Dr Opas said.

After 28 days, they will be tested for immunity, he said. If they pass the test, they will be allowed to return to work and go back home, he said. As a result, the factories will not be closed, workers will get their pay and the economy will move on, Dr Opas said.

Addressing questions about the details of the country's reopening plan, Dr Opas said current lockdown measures will expire on Aug 31 and the government will make an assessment of whether to reopen then.

"It is hoped that from September until the end of this year, and next year, we will allow activities to restart and people to resume their normal lives," he said. "Based on the figures currently available, it has been agreed that the outbreak situation has reached its peak and will slow down."

"However, the situation will be monitored for another three to four days to make sure the signs will be positive, though there are still some vulnerable areas that must be strictly controlled before the lockdown measures can be eased."

The reopening of Phuket under the tourism sandbox scheme is a good example of where local infections detected after the launch of the programme can be brought under control and tourists can still be allowed to visit the island province under strict disease control measures, Dr Opas said.

Anucha Burapachaisri, spokesman for Government House, on Monday said Gen Prayut held a teleconference with Pascal Claude Roland Soriot, CEO of AstraZeneca Plc, who confirmed that the company will speed up delivering the rest of vaccine doses to meet a commitment made to deliver 61 million doses to Thailand before the end of the year.