A main road to Phetchabun was impassible for traffic on Sunday due to flooding from Dianmu, a tropical storm that unleashed heavy rain in this and other provinces.

A three-kilometre section of Highway 21 in Wichien Buri district of Phetchabun remained flooded, barring all types of vehicles from passing, after heavy rain slammed the district from Saturday night to Sunday morning. Some areas on the road saw the water level rise up to one metre.

"The water level is stable now," the official said. "But travellers betwen Bangkok and Phetchabun should put their plans on hold."

Highway 21 is the main transport lifeline linking Phetchabun and Bangkok via Saraburi. 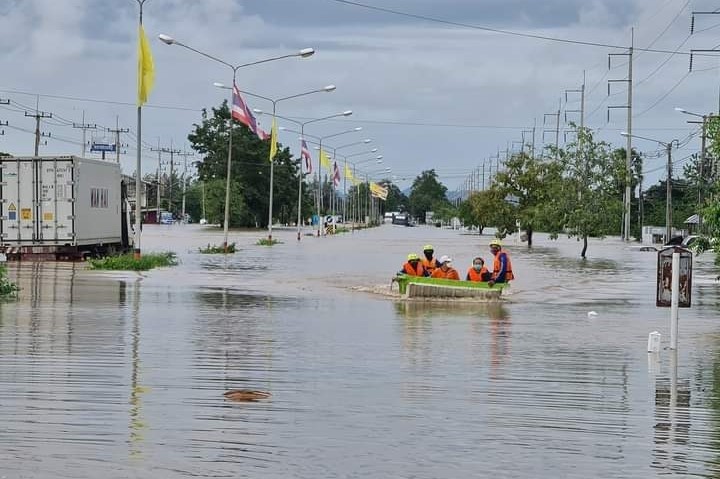 Rescuers use a boat to help people along flooded Highway 21 in Wichen Buri district of Phetchabun. (Photo: Sunthorn Kongvarakhom)

Wichien Buri took the hardest hit from rain with 193.5 millimetres from the 24 hours to 1am on Sunday, data from the Meteoroligical Department showed. Next was Tak Fah district of Nakhon Sawan and Muang district of Chaiyaphum.

Wichien Buri district chief Pakorn Tanjaitrong said every corner of the district was submerged and rescuers were concentrating on helping people move to safe places.

Hatairat Thongjaisod, chairwoman of the Tambon Borrung Administration Organisation, said a poultry farm was severely flooded and rescuers rushed to evacuate about 200 workers at 2am on Sunday, leaving thousands of chickens behind.

Damage from flooding was reported in at least 10 provinces by the Disaster Prevention and Mitigation Department. They included Nakhon Sawan, Nakhon Ratchasima and Sukhothai.

Phakkhaphon Krongsin of Moo 2 village in Nong Bua district of Nakhon Sawan said rain continued to pummel his village for about eight hours, forcing him to move his family and belongings to high ground all night.

Flooding came back to Kabinburi district of Prachinburi in recent weeks but the damage was contained as people already moved their important belongings to safe locations in the municipality.

Tropical depression Dianmu has inundated at least 14 provinces since Wednesday, with the situations in four of them -- Chiang Mai, Lamphun, Lampang and Tak -- now improving.

The weather agency's latest forecast said the entire country, including Bangkok, would be blanketed by rain at least until Monday. Rain would be subside during the week, it added.