The house of Ream Boonprasert in Nonthaburi is flooded as the Chao Phraya Dam in Chainat discharges more water downstream. (Photo: Pattarapong Chatpattarasill)

Experts and government authorities have given assurances Thailand will not face a repeat of the 2011 deluge that devastated the country.

They are attempting to allay mounting public concern about the flood situation which has wreaked havoc in several parts of the country.

Interior Minister Anupong Paojinda said several water retention areas have been created, with systematic water management in place to cope with the situation and store floodwater for use in the dry season.

"I have instructed provincial governors and agencies under the Interior Ministry to be on standby to help flood victims," he said. 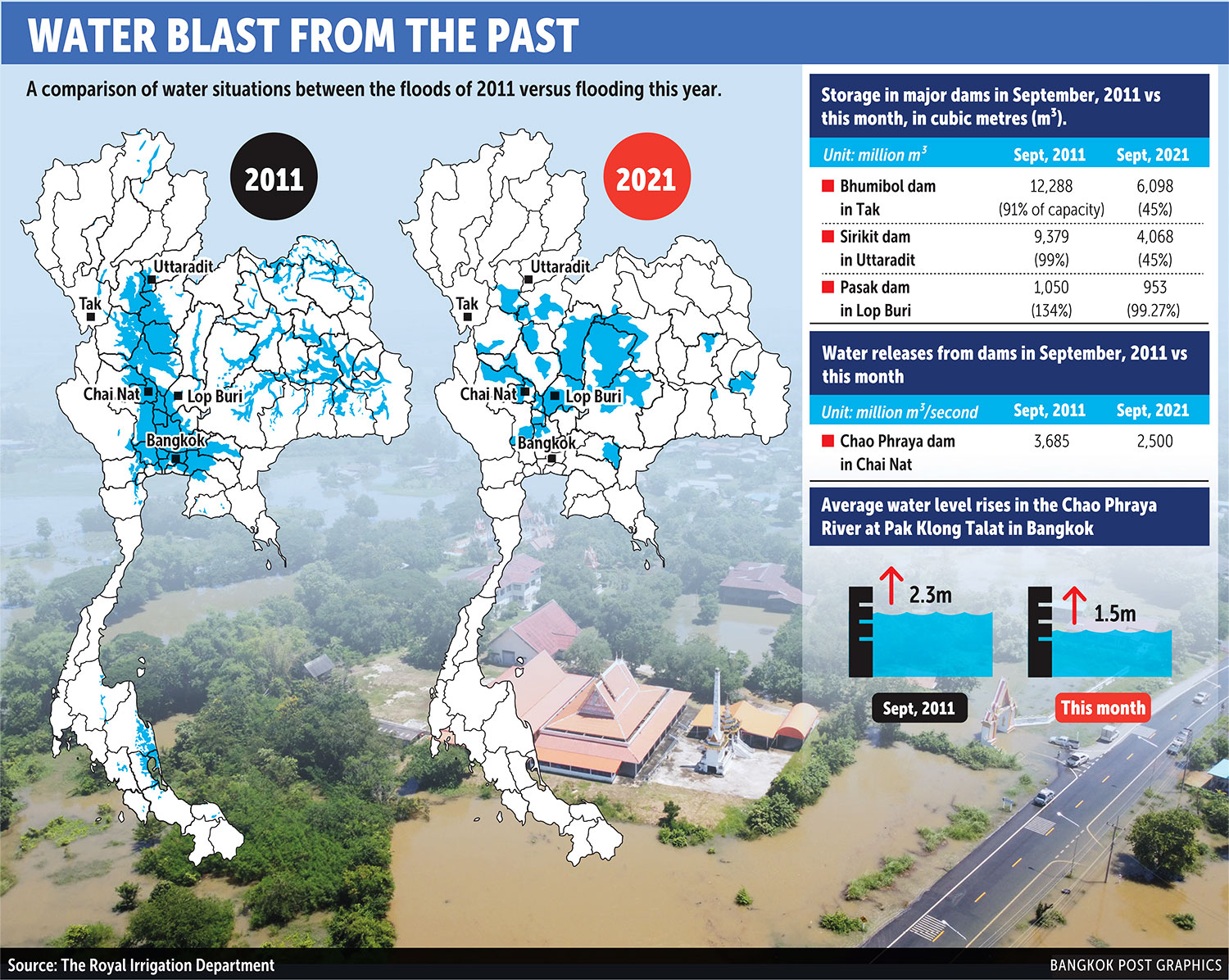 He stressed the need for timely flood alerts and for authorities to get essential items, food, drinking water and relief supplies ready for quick delivery to flood victims.

Pakorn Ataphant, executive director of the Geo-Informatics and Space Technology Development Agency (Gistda), said several factors will prevent a repeat of the 2011 deluge.

In 2011, there were several storms battering Thailand, compared to the current situation in which only a few storms have arrived, he said.

Given the experience in handling the 2011 flood, water management plans have improved significantly, with the construction of flood levees, and increased numbers of water retention areas covering 160,000 rai, Mr Pakorn said.

"The current situation will not be like in 2011. So, people should not panic. The rate of water current at 2,600 cubic metres per second will not lead to severe floods, except for waterside communities which may face floodwaters of up to 30cm but the water will drain away in a few days. Economic and industrial areas will not be affected as in 2011," Mr Pakorn said.

The Foundation of the Natural Disaster Warning Council on Wednesday issued an assessment of the current flood situation compared to the 2011 deluge.

Pramote Maiklad, vice-chairman of the foundation and former director-general of the Royal Irrigation Department (RID), said water volume in the country's four major dams was relatively low, compared to those in 2011. Therefore, a repeat of 2011 is unlikely, he said.

If two more storms set in, the dams still have more than enough capacity to take in the water, he said, adding the level of the Chao Phraya River is still low, with the construction of high embankments along the river.

Bangkok deputy governor Sakchai Boonma said that much of the water run-off from the North will not pass through Bangkok as the RID will divert it to Chachoengsao, Prachin Buri and Ayutthaya from the Chao Phraya River.

"People living in Bangkok and surrounding provinces should not worry," he said.

Meanwhile, Pasak Jolasid Dam officials in Lop Buri on Wednesday sent a warning letter to the five downstream provinces of Lop Buri, Saraburi, Ayutthaya, Pathum Thani and Nonthaburi, saying the dam was holding 953 million cubic metres on Wednesday morning, or 99.27% of its capacity. The dam would need to speed up water discharges.

He also expressed concern for tens of millions of farmers whose farmland has been affected by flooding, adding the government will come up with measures to fix the economy, eradicate poverty and boost people's incomes.