The Supreme Court has upheld the acquittal of Dr Nitiwadee Pucharoenyos of the 2013 murder of her national sports shooter husband, and reduced her mother's life sentence to 25 years.

The court upheld the death sentence given to the lawyer who arranged for the gunman, and life imprisonment for the gunman and his motorcyclist associate.

The ruling was delivered in Min Buri Court in Bangkok on May 12 this year, but was reported by Thai media only on Friday.

The Supreme Court’s ruling ended the high-profile case involving former national sports shooter Jakkrit “X’’ Panichpatikum, who was shot dead on Oct 19, 2013, then 41, after a row with his wife Nitiwadee, a dermatologist known as Mor Nim.

Prosecutors and the slain man's father, Manop Panichpaitkum, filed a lawsuit against five people for involvement in the murder.

They were charged with colluding in murder, masterminding the killing and violating the firearms law.

Dr Nitiwadee was initially charged with masterminding the murder of her husband on Oct 19, 2013, in the wake of reports of domestic violence at their home.

On Dec 19, 2016, the Min Buri Provincial Court convicted and sentenced to her and lawyer Santi Thongsem to death for hiring gunman Jirasak Klinkhlai to kill Jakkrit.

The court also handed down life imprisonment sentences to gunman Jirasak and to Thawatchai Phetchote, who drove the motorcycle Jirasak rode on.

In August, 2018, the Appeal Court  acquitted Dr Nitiwadee of masterminding the murder of her husband and handed her mother the death sentence instead.

The court ruled that there was no evidence that Dr Nitiwadee, then 41, had hired anyone to kill Jakkrit. Existing evidence pointed to her mother Surang as the mastermind and was consistent with Surang's confession.

The evidence showed that Surang had a middleman ask lawyer Santi to hire a gunman and a motorcyclist for 200,000 baht to kill Jakkrit. (continues below) 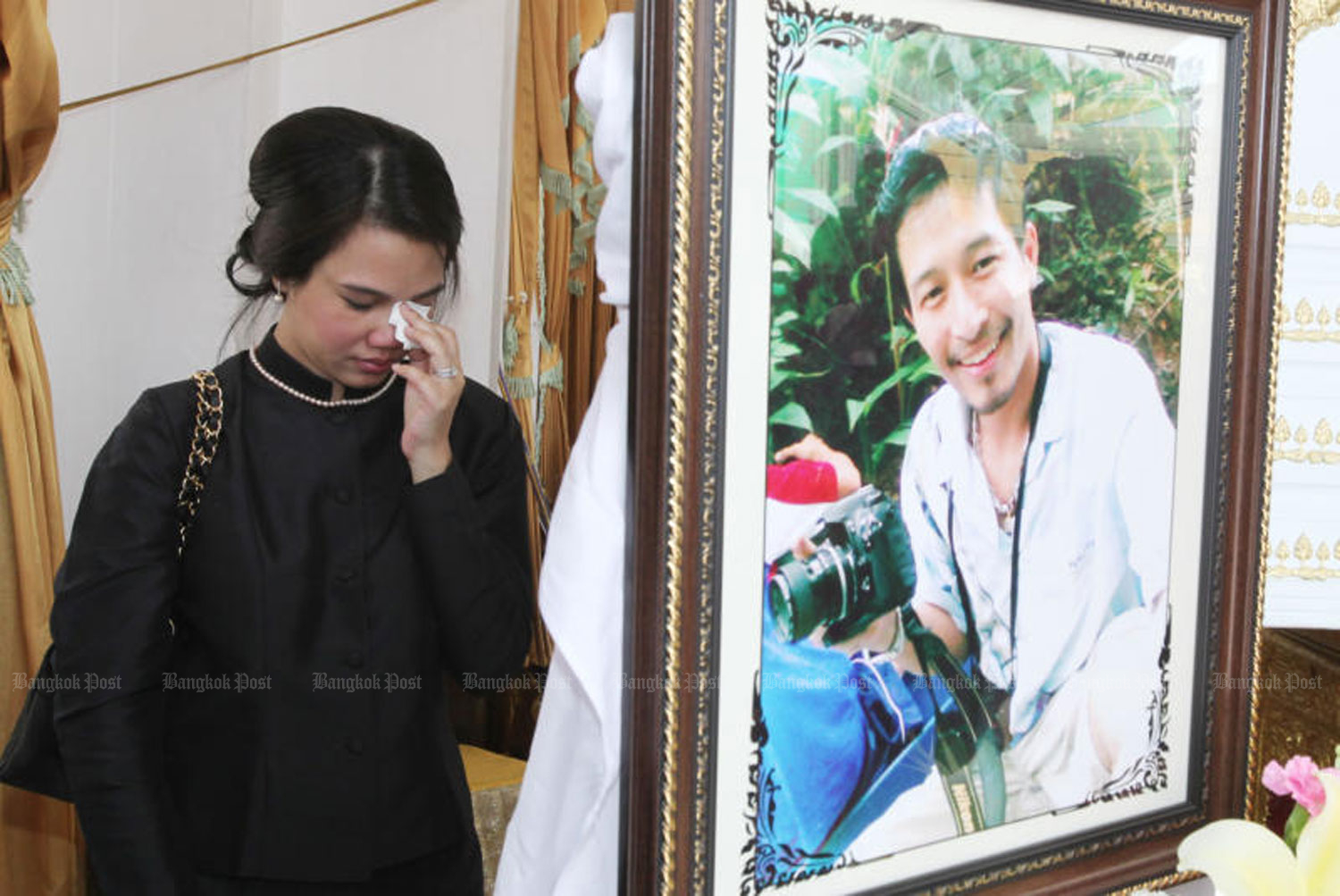 Nitiwadee Pucharoenyos, widow of murdered national sports shooter Jakkrit Panichpatikum, cries at her husband’s cremation ceremony at Wat Phra Si Mahathat in Bang Khen district, Bangkok, in October 2013. A month later she was charged with masterminding his murder. She has been acquitted. (File photo by Apichit Jinakul)

The Appeal Court sentenced Surang to death, commuted to life in prison for her useful testimony.

The court, however, upheld the first court’s judgement on the other defendants in the case.

Lawyer Santi was sentenced to death. Gunman Jirasak and motorcyclist Tawatchai were sentenced to life imprisonment.

The Appeal Court also ordered the four to pay 2.5 million baht in compensation to Jakkrit's family.

Surang, the second defendant, was released on one million baht pending the appeal to the Supreme Court. The gunman, the first defendant, also appealed.

The Supreme Court threw out an appeal by the first and second defendants regarding compensation payments to Jakkrit’s family. The court ruled in favour of the Appeal Court’s decision to order them to jointly pay 2.5 million baht in compensation.

However, the court reduced to 25 years the life imprisonment sentence for Surang after taking into consideration the actions of the slain national shooter towards her only daughter, Nitiwadee.

He had repeatedly assaulted her.  Worse still, he sometimes physically abused his wife in front of their children. He had emotional problems.

Two months before he was shot dead, he had fired gunshots in the direction of his maid and his youngest child. He was detained and later granted bail, the court said.

Jakkrit was shot three times while driving his black Porsche near Soi Ramkhamhaeng 166 in Bangkok late on Oct 19, 2013. He was on his way to meet Dr Nitiwadee, who lived separately in a house further down the same road.

After he was shot, his maid called Dr Nitiwadee, who arrived at the scene a few minutes later and tried unsuccessfully to resuscitate him.

In November 2013, police arrested Jirasak, the gunman, who confessed that he was hired by Santi.

Surang then came forward and confessed to hiring the gunman. She said she acted alone because Jakkrit had repeatedly abused her daughter during their six-year marriage. She claimed her daughter was not involved in the murder. Police charged her anyway. 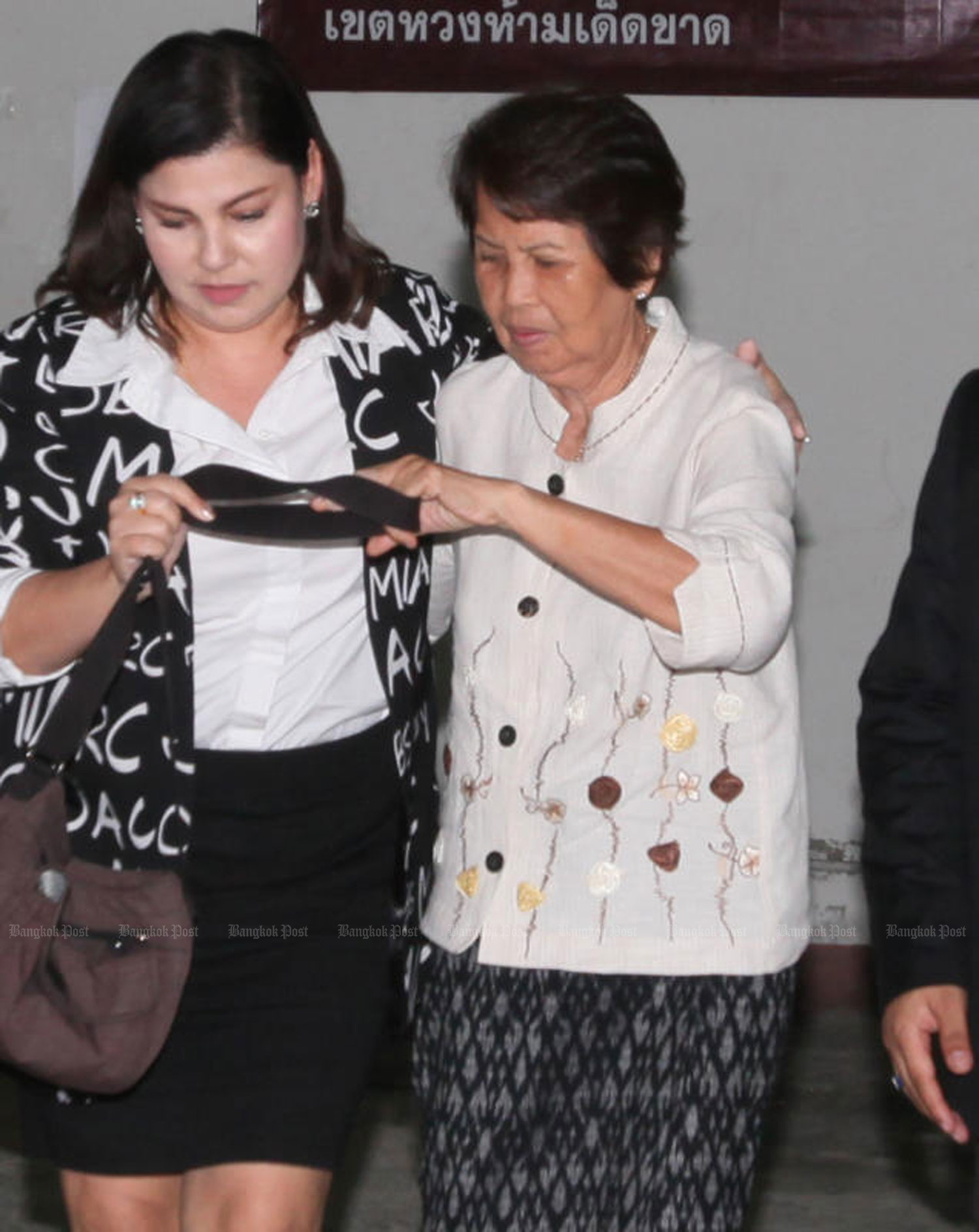