As state agencies gear up for Prime Minister Prayut Chan-o-cha's vow to reopen the country to fully vaccinated tourists from Nov 1, concerns over public health safety have been raised by some medical experts.

Both the authorities' actions and responding health concerns follow Gen Prayut announcing the government's reopening plan via a special televised speech Monday night, saying the country seeks to receive fully vaccinated tourists from low-risk countries who will not have to spend time in Covid-19 quarantine.

The Tourism Authority of Thailand (TAT) has been preparing for the country's reopening for a long period of time and has already piloted the tourism reopening in key tourist destinations such as Phuket, said Tourism and Sports Minister Phiphat Ratchakitprakarn on Tuesday.

More provinces including Bangkok were previously in line to be included in the next phase of the tourism reopening programme, while the PM's new reopening policy has come as a catalyst for reopening the country's tourism, said Mr Phiphat.

Several other countries including neighbouring Singapore have already announced their reopening plans while the EU, Britain and the US have already reopened, he said.

"This is a competition to draw tourists in. So if we still impose a Covid-19 quarantine on them, such as for seven days, we won't be able to compete well with other countries," he said. "The Nov 1 reopening plan will attract a large number of tourists to Thailand between this year's last quarter and the first quarter of next year."

Thailand has long been considered one of the most popular destinations for visitors from Europe, the US, Japan, South Korea, and China during the approaching winter in these countries, he said.

The Public Health Ministry has already planned to speed up Covid-19 testing on tourists upon their arrival at airports to facilitate an expected rise in the number of visitors with the reopening, he said. 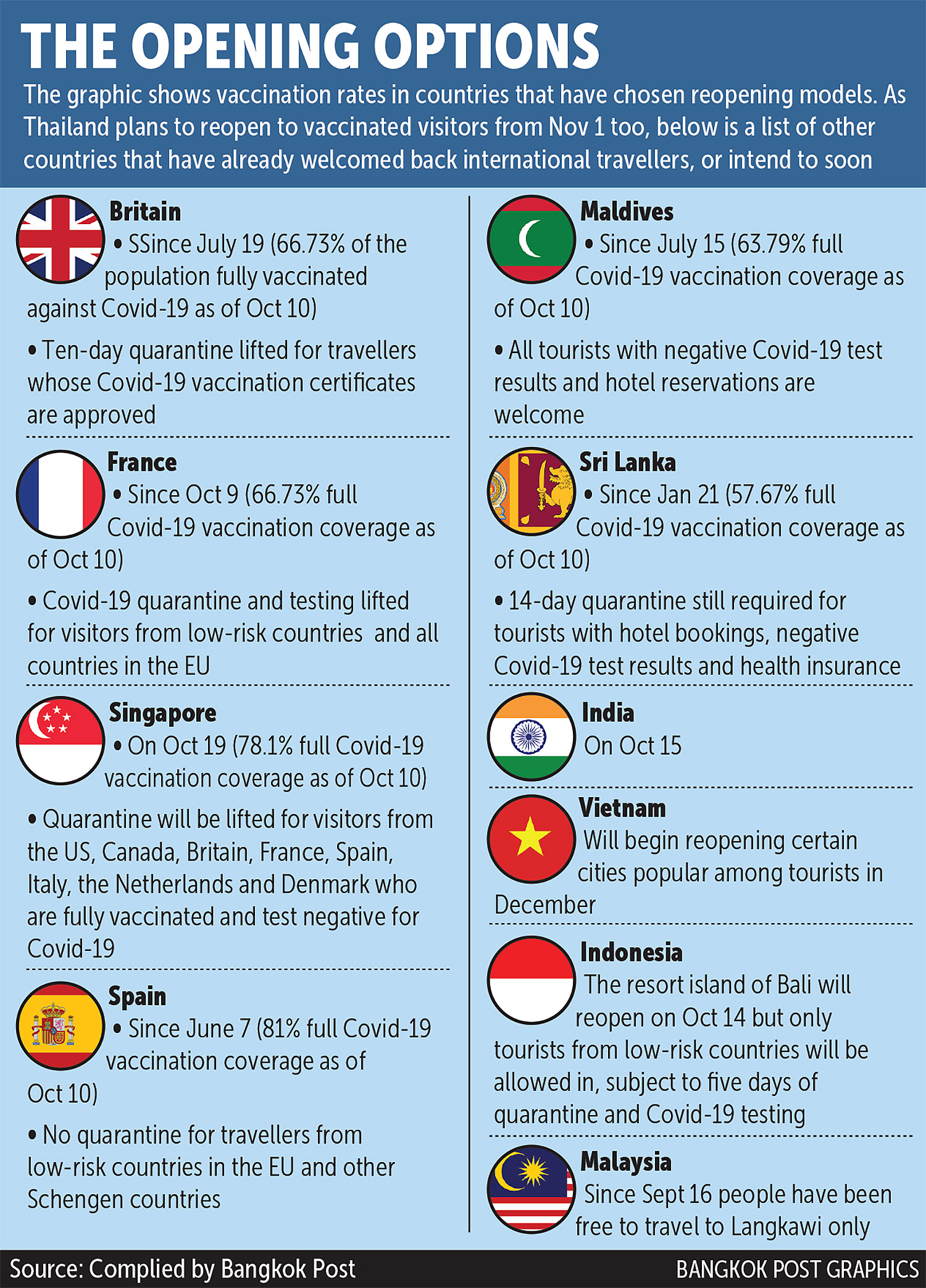 As for the countries whose tourists will be allowed to enter Thailand at the beginning of the Nov 1 reopening, TAT is now specifying which countries should be included in the list of low Covid-19 risk nations, he said. "More details of the reopening plan are expected to be discussed at the next meeting of the Centre for Covid-19 Situation Administration (CCSA) tomorrow," Mr Phiphat said.

At this point, four to five countries have been named including Britain, Germany, the US and China, he said, adding that the government is also considering seeking tourism cooperation with other Asian countries planning to reopen such as Singapore.

The government is accelerating vaccination efforts and is confident the target of 70% vaccination coverage will be met as planned, said government spokesman Thanakorn Wangboonkongchana. More than 61 million doses of Covid-19 vaccines have already been administered and a total of 178.2 million doses are expected to be delivered by the end of the year, he said.

But Dr Thira Woratanarat, an associate professor at Chulalongkorn University's Faculty of Medicine, meanwhile, cautioned that the number of daily new Covid-19 infections may surge by at least twice the current figures after the reopening.

Citing an analysis of infections experienced by Chile, which reopened on Oct 1, and Denmark, reopened since early September, Dr Thira said the number of new Covid-19 cases may jump to around 20,000 per day and then keep doubling every three weeks after that.

At the same time, he said, he is concerned that the arrival of international tourists could trigger another major outbreak.

Virologist Anan Jongkaewwattana, from the National Centre for Genetic Engineering and Biotechnology, made concerning comments about the reopening on his Facebook page.

"If 100,000 tourists visit, how will we do RT-PCR tests because we have never done so many before?" he asked.