Curfew hours cut in some provinces

Prime Minister Prayut Chan-o-cha on Thursday urged the public, businesses and government to cooperate in preparing for the country's reopening to fully vaccinated tourists next month. 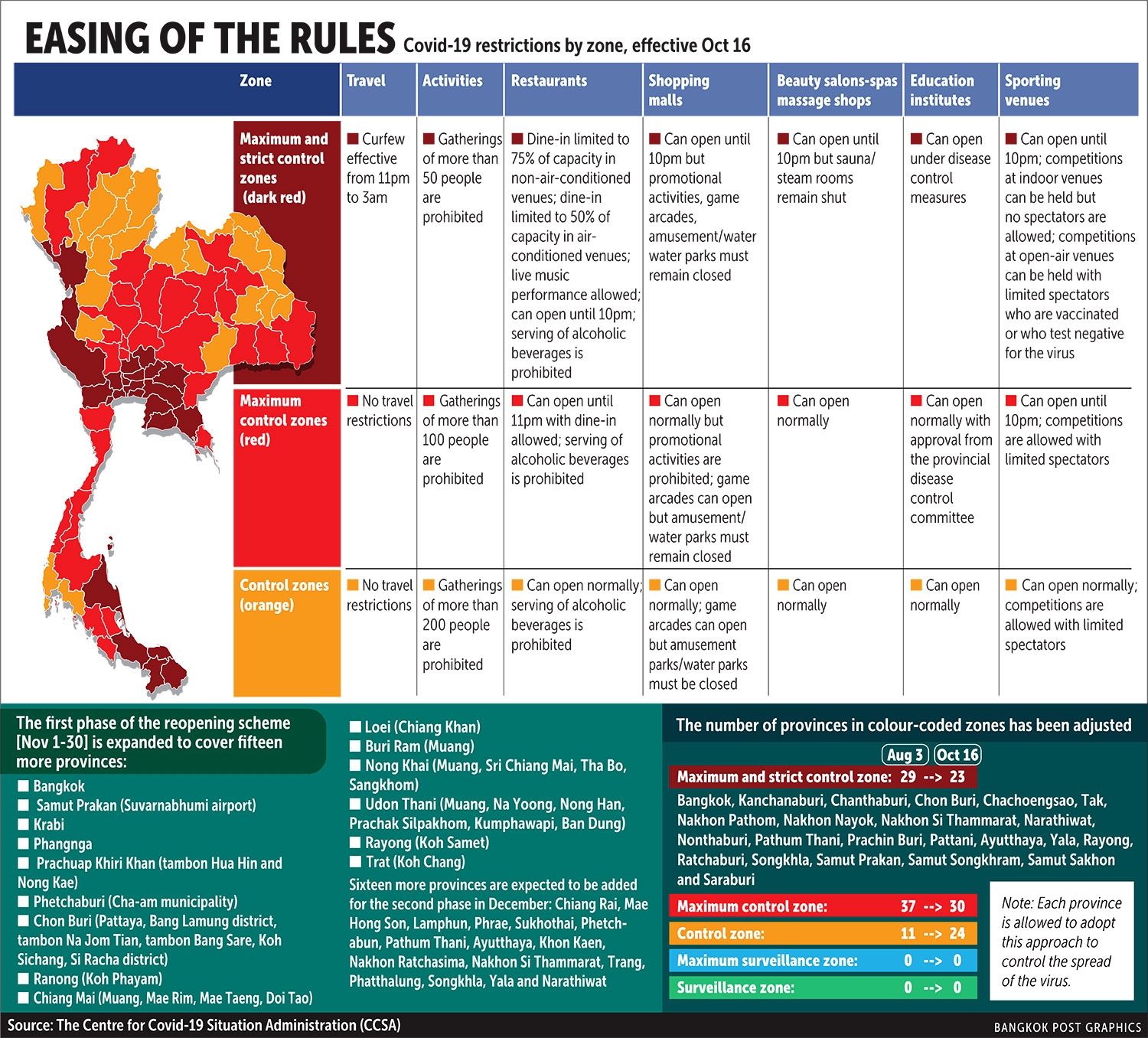 Speaking after chairing a CCSA meeting, Gen Prayut confirmed that Thailand is ready for the reopening. It will go ahead as planned on Nov 1 and more restrictions will be relaxed on Dec 1, he said.

"We will spend the remaining time in October and November considering the reopening of the country and easing curbs on businesses and activities based on recommendations from the Public Health Ministry," he said. "Right now, visitors from several countries want to travel to Thailand, but we must tread carefully.

"What I want to declare today is that everyone should join hands," the prime minister said. "I also want to ask for cooperation from the public. This will be a small start for people so they can resume making a living.

"When Thais join forces, they will always do things beyond expectations. I know everyone is working hard to make sure this [reopening] will happen," Gen Prayut said.

"I am here to confirm our readiness to join hands and bring Thai tourism back to life. I want to seek cooperation from the public to tell the world how well-prepared Thailand is for the reopening."

Taweesilp Visanuyothin, spokesman for the CCSA, said it decided on Thursday to allow fully vaccinated people from Britain, the United States, Germany, Singapore and China to visit the kingdom, if they can pass an RT-PCR test before they arrive from Nov 1 to Dec 31.

Travellers from these five countries are considered as having a low risk of spreading Covid-19, he said, noting they will not have to quarantine upon arrival.

The number of destinations opened to tourists will also be expanded from four provinces -- Phuket and parts of Surat Thani, Phangnga and Krabi -- to 15 provinces of economic significance from Nov 1-30.

The 15 provinces would include all of Bangkok, Samut Prakan (only Suvarnabhumi airport), Prachuap Khiri Khan (Hua Hin district) and all of Krabi and Phangnga, Dr Taweesilp said.

From Dec 1, another 16 major provinces would reopen, including Chiang Rai, Mae Hong Son, Lamphun, Phrae and Sukhothai, he said. The operations committee of the CCSA had yet to finalise the entire list of the additional provinces, Dr Taweesilp said.

The CCSA on Thursday also announced that starting tomorrow, the number of dark-red provinces of maximum and strict Covid-19 control will be cut from 29 to 23, and the nighttime curfew will be shortened. More businesses also can resume.

The number of red provinces of maximum control will also decline from 37 to 30, and orange-coded provinces will rise from 11 to 24.

In dark-red zones, the curfew will be eased to 11pm to 3am for at least the next 15 days, instead of the current 10pm-4am. Convenience stores and markets could open until 10pm, and amusement areas could reopen.

Cinemas, eateries, theatres, stadiums, public parks and shopping centres could stay open until 10pm. Daycare centres for elderly people could reopen, and public transport vehicles could make use of all passenger seats.

Trade, convention and exhibition centres and the like at hotels and department stores could organise meetings of up to 500 people, but food would have to be served in individual servings, and people must wear face masks. Meetings would be limited to two hours and end by 10pm.

Shopping centres, except those in dark-red zones, would be able to reopen their arcades.

Entertainment venues will remain closed, including pubs and karaoke parlours, because of the high risk of disease transmission, Dr Taweesilp said.

Sanan Angubolkul, chairman of the Thai Chamber of Commerce, who was also present at the CCSA's meeting on Thursday, said this was a positive signal for all sectors to prepare measures to reduce infection risks and move the economy forward.