Two hundred teachers and educational personnel at Wattana Wittaya Academy on Sukhumvit Soi 67 are taught how to use an antigen test kit by medic at Kluaynamthai Polyclinic on Monday. (Photo: Apichart Jinakul)

The Centre for Covid-19 Situation Administration (CCSA) on Wednesday afternoon expressed concern about a case surge in Chiang Mai that would prompt authorities to keep monitoring the situation in the northern province -- and other provinces planning to reopen for foreign tourists at the end of this month.

Chiang Mai logged 357 new cases on Wednesday, up from 294 on Tuesday, according to figures released by the provincial public health office.

Dr Sumanee Watcharasin, a health official from the Department of Disease Control, said during the CCSA press briefing that new cases detected in Mae Hong Son were linked to Chiang Mai.

Chiang Mai was one of the provinces added to the watch list that already covered four southern provinces, the official said. "We are on alert about provinces to be reopened for tourists," she said.

Bangkok, along with Chiang Mai, Pattaya, Hua Hin and Phetchaburi, is part of the plan to reopen the tourism industry on Nov 1.

The country also received 18 new cases from aboard, including 10 from Myanmar, two from Russia, and one each from the United Arab Emirates, Poland, Spain, Germany, Sweden and Malaysia.

Bangkok logged 18 fatalities and the four provinces in the far South accounted for combined 16 deaths, led by eight in Pattani and four in Yala.

On Tuesday, 10,878 Covid-19 patients were discharged from hospitals after recovering from the coronavirus, while 103,507 people received Covid-19 treatment at hospitals, including 2,728 seriously ill patients and 619 dependent on ventilators.

The death toll stood at 18,392 during the third wave and 18,486 since the beginning of the pandemic. 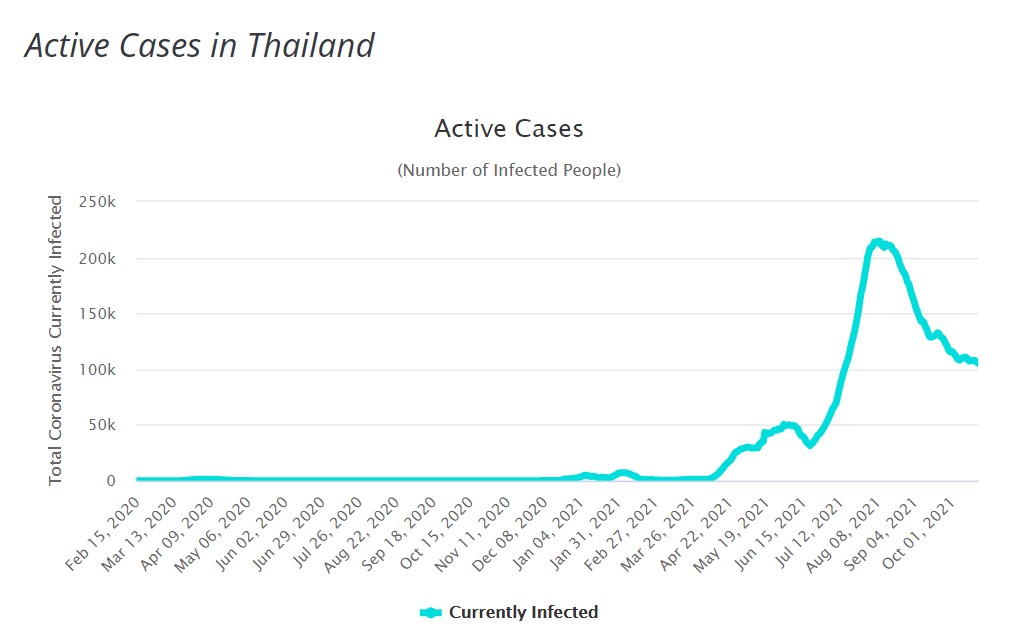