Disgraced former monk Phra Yantra, who has lived in the US for almost three decades, returns to his hometown in Pak Phanang district of Nakhon Si Thammarat last week to celebrate his 70h birthday. (Photo: Nujaree Rakrun)

Clad in green, not his  former saffron robes, he was seen in a video posted on social media paying respect to Buddha relics at Wat Phra Mahathat Voramahaviharn in Muang district of this southern province last week.

He was reported to have been in his hometown in Pak Phanang district from Oct 16 to 19.

The video showed him attended by followers laying black clothes, shoulder bags and wallets on the road surface for the former monk to step as he walked past. The expelled monk gave them lotus flowers before getting into a van and leaving.

Winai La-ongsuwan, better known as Phra Yantra, has often returned to Thailand in October to celebrate his birthday since the criminal defamation case against him expired in 2014, but has not been home for two years, since the Covid-19 pandemic struck .

Yantra was a priest for several years before he entered the monkhood in 1974 at Wat Rattanaram in Pak Phanang. A charismatic figure, the monk attracted a very large following.

According to Thai Rath newspaper, people from all over the country flocked to Sanam Luang in Bangkok "to listen to a sermon given by a handsome monk with a beautiful voice", Phra Yantra.

In 1994, he faced a series of accusations, including defaming the Supreme Patriarch, a criminal charge under the Sangha Act, and having sex, a violation of monkhood, with his nocturnal visits being captured on video.

He had an affair with a woman follower, Chantim, and fathered a daughter by her.

The Sangha Supreme Council found him guilty of conduct unbecoming a monk and expelled him.

Yantra later allegedly obtained a fake passport and fled to the United State, where he was granted asylum and continued to perform as a monk.

Chainarong Sawasdeenaruenart, a former mayor of Pak Phanang municipality and his close follower, said on Thursday that Mr Winai arrived in his hometown on Oct 16 and left on Oct 19.

During his visit, the ex-monk stayed at his elder sister’s house. Before coming to Thailand he had received three doses of Covid-19 vaccine.

“When he arrived in Pak Phanang, local residents who still have their faith in former Phra Yantra came out to welcome him, but not in large numbers because many are still afraid of Covid-19. The former monk said he would return to Thailand each year for his birthday on Oct 14,'' Mr Chainarong said.

The 70-year-old took part in religious activities in Kanchanaburi before visiting Pak Phanang. He is due to fly back to the US on Oct 27, Mr Chainarong said.

Thai media reported that his hometown monks greeted him with a respectful wai. 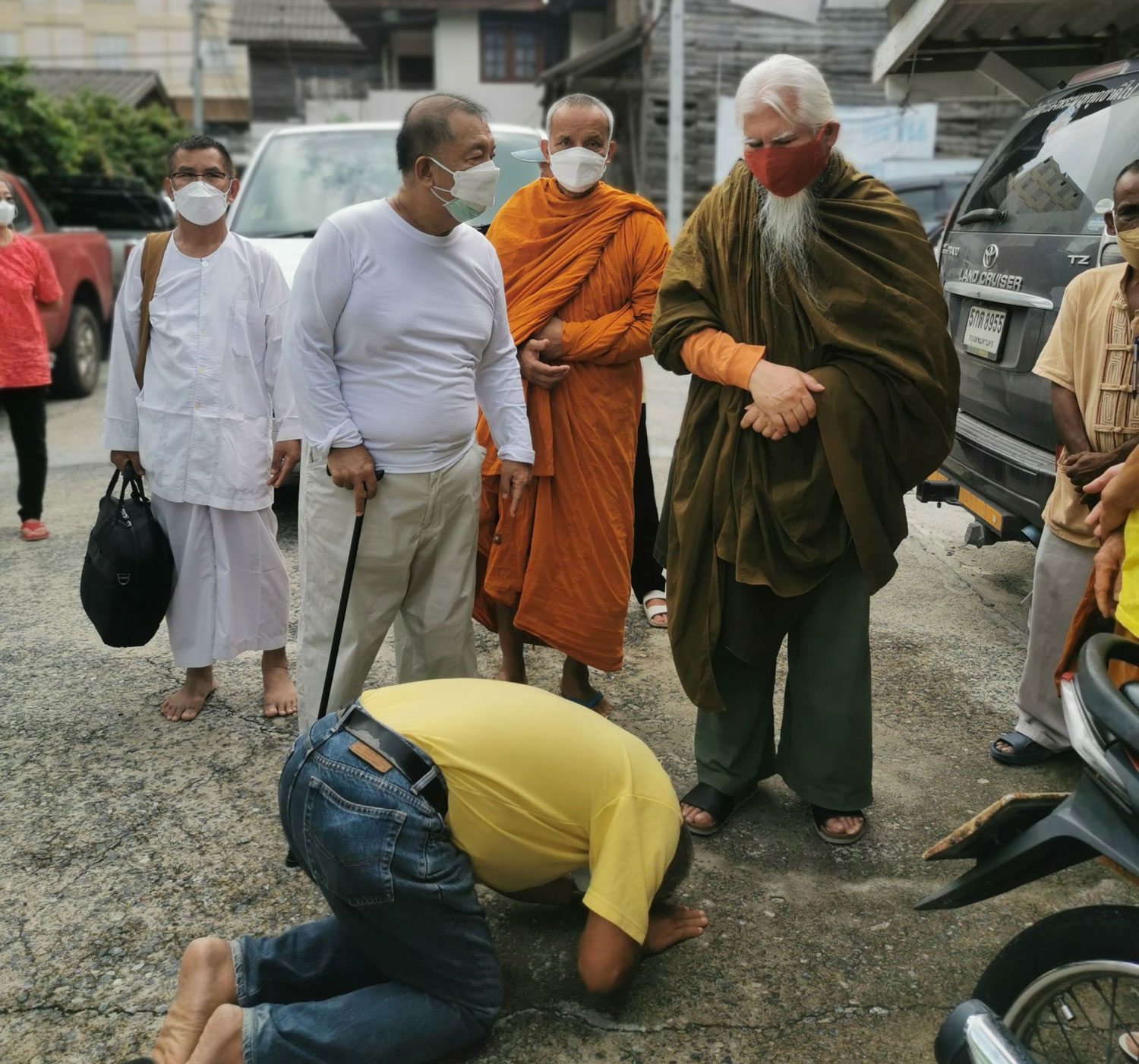 A man pays respect to the former Phra Yantra during his visit to his home town of Pak Phanang district in Nakhon Si Thammarat last week. (Photo: Nujaree Rakrun)