A traveller walks inside the terminal of Don Mueang airport, which is Thailand's hub for low-cost airlines. (Photo: Pattarapong Chatpattarasill)

Night entertainment venues will remain closed in 17 provinces during the initial stage of the country's reopening to vaccinated foreign visitors from 46 countries next month.

Meanwhile, the nighttime curfew imposed to help curb the spread of Covid-19 will be lifted in 17 provinces, including Bangkok, on Oct 31. 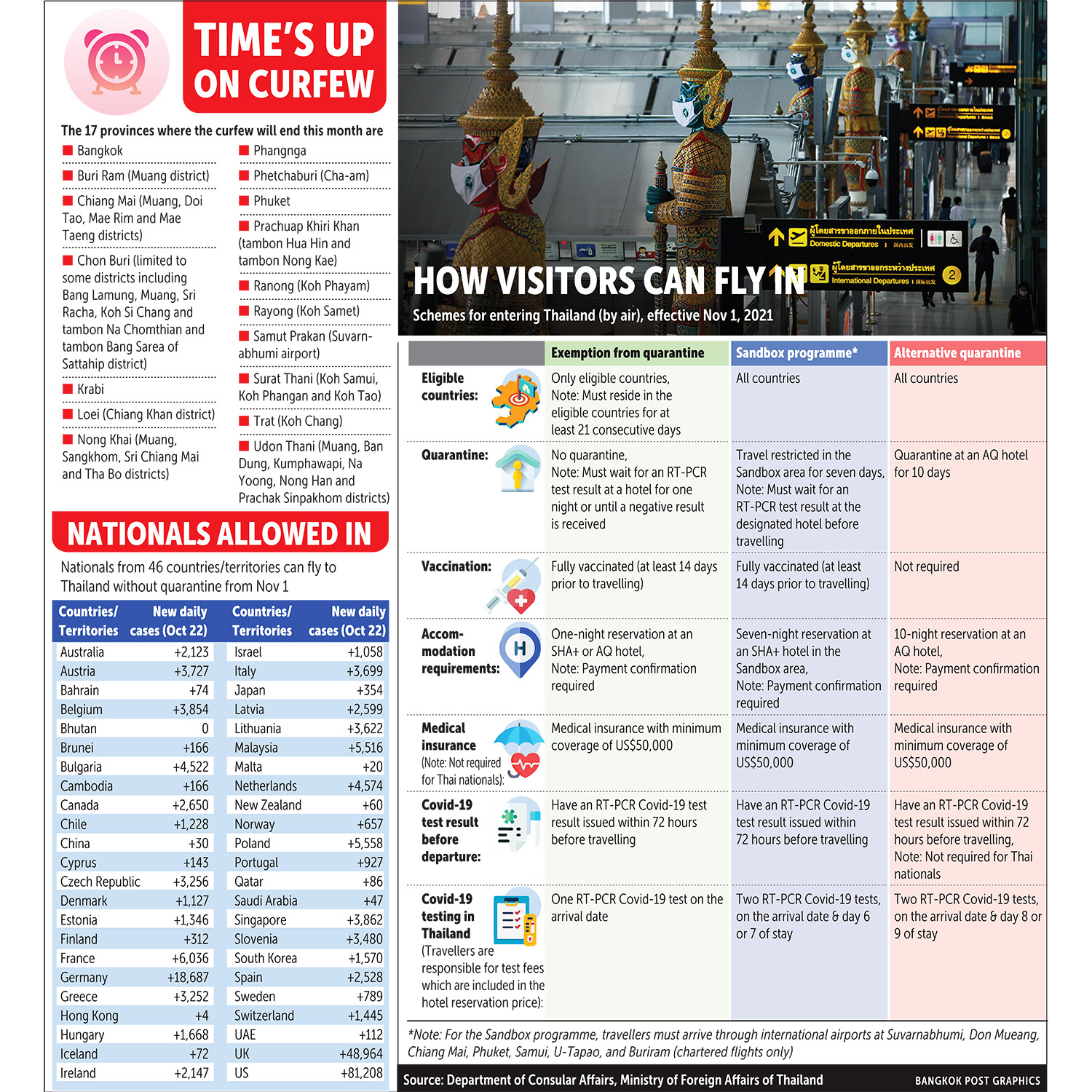 Thanakorn Wangboonkongchana, the government spokesman, said that Thailand is ready to welcome back fully vaccinated foreign visitors from 46 countries from Nov 1, but it remains to be seen how many of them will arrive.

The Centre for Covid-19 Situation Administration (CCSA) is waiting for information from the Foreign Affairs Ministry and the Tourism and Sports Ministry, Mr Thanakorn said.

"We have announced an initial list of 46 countries. When and whether any of them will arrive remains to be seen. We are waiting for information," Mr Thanakorn said.

On Thursday evening, Prime Minister Prayut Chan-o-cha posted on Facebook that Thailand will reopen the country to visitors from 46 countries instead of only 10 Covid-19 low-risk countries announced earlier, starting from Nov 1.

He did not name the countries in the post but wrote it was now necessary to speed up the opening.

Visitors from the 46 countries (see graphic), described as the first low-risk group, may enter Thailand by air without quarantine, provided they have been fully vaccinated and have evidence of pre-flight negative test results. They must also agree to take another test upon arrival.

The prime minister also ordered an end to the curfew in 17 provinces, including Bangkok, from Oct 31 to support the reopening of the country. The order was published in the Royal Gazette late on Thursday night.

It said the Covid-19 situation in the country was improving with stable new caseloads and faster patient recovery, and it was necessary to revive the national economy.

The curfew will therefore end at 11pm on Oct 31 in the 17 "Sandbox" provinces that had been declared maximum and strict control zones but which have tourism significance and are designated for reopening.

The number of people at public gatherings in the tourist reopening zones will be capped at 500.

Entertainment venues in the 17 provinces will remain closed, including pubs, bars and karaoke shops, but operators and officials could begin preparing for their reopening.

Apisamai Srirangson, a spokeswoman for the CCSA, said on Friday that on Nov 1 Thailand would end quarantine for vaccinated arrivals from the 46 countries.

Visitors from any of these countries must have also stayed in that country for at least 21 days prior to departure and received their second jab dose at least 14 days before their flight to Thailand.

They must have an RT-PCR test that comes back negative no more than 72 hours before their flight and have health insurance of at least US$50,000.

Upon arrival, visitors will be given another RT-PCR test and can travel on without quarantine if the test returns negative.

They will also be required to download a phone app that will track their whereabouts.

Thai nationals who had earlier left Thailand to visit any of the 46 countries but stayed there less than 21 days will not be quarantined and will not be required to have health insurance cover of US$50,000, Dr Apisamai said.

Arrivals on other kinds of flights must enter "sandbox" programmes in, for example, Phuket, Koh Samui, Koh Phangnga and Krabi, under the same initial post-arrival conditions but with further tests six or seven days later.

However, Thanet Supornsahasrangsi, president of the Tourism Council of Chonburi, said that some foreign visitors may still be reluctant to visit due to other limitations.

For example, if tourists from China visit Thailand, when they return to their country, they will have to be quarantined for 14 days or 21 days in some cities, he said.

Another unanswered question that may deter tourists is whether the Thailand Plus tracing app will replace the certificate of entry, he said, adding that the list of the 46 low-risk countries does not include Russia, whose citizens make up the majority of tourists in Pattaya, Mr Thanet said.

Thailand's exports in April rose at a much slower pace than the previous month and less than expected, commerce ministry data showed on Friday, coming under the pressure of Russia's invasion of Ukraine and China's lockdown measures.