Activists urge govt to do more on climate

Thai civil society has called on the global leaders at the 26th UN Climate Change Conference of the Parties (COP26) to strengthen their climate actions to fulfill the ultimate goal of preventing the world temperature from rising beyond 1.5º Celsius.

Studies have warned the world has just eight years to halve greenhouse gas emissions, before the climate stabilisation goal is missed, observers say. 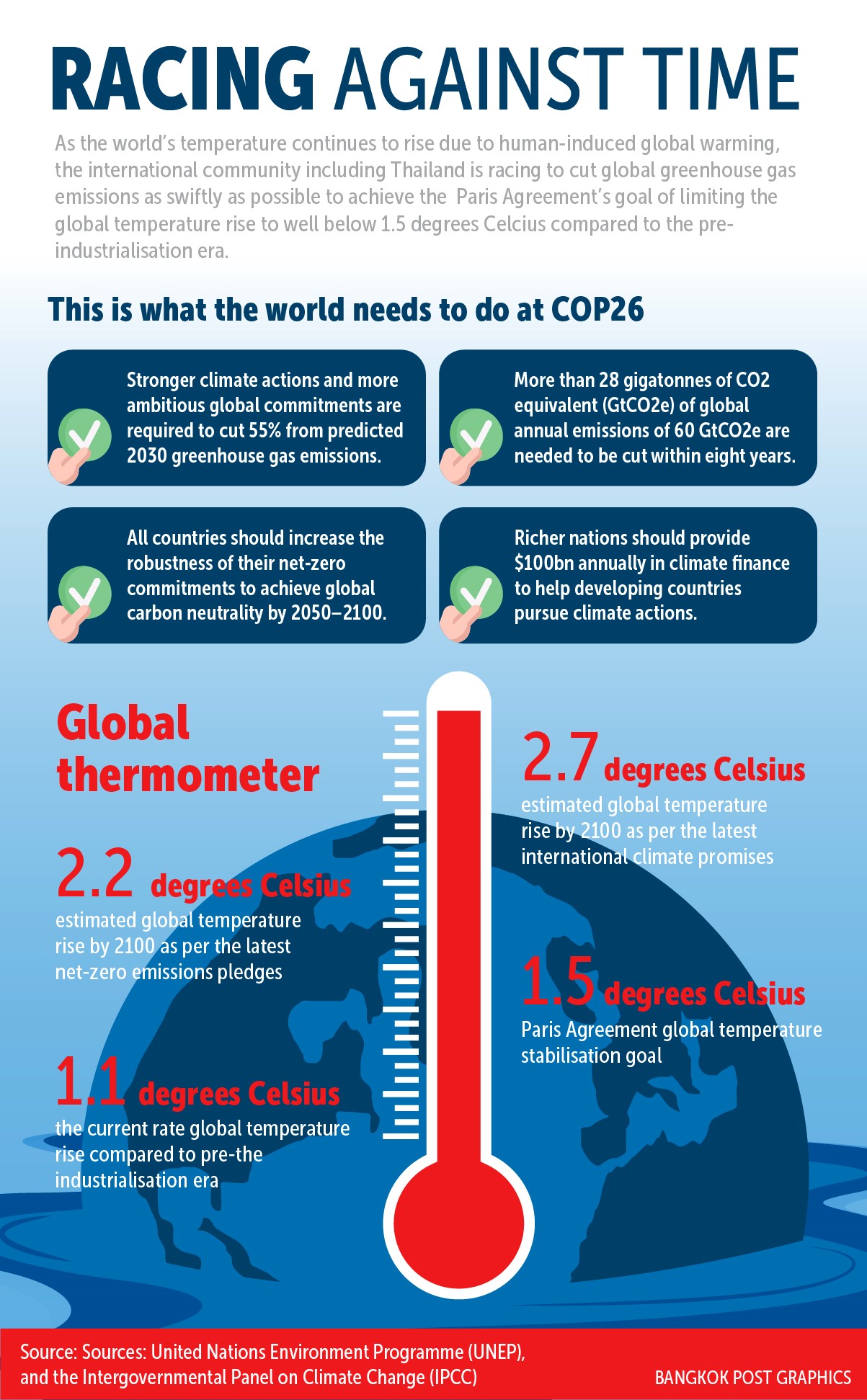 Running until Nov 12, the leaders of 197 countries are convening in Glasgow, in the United Kingdom, as they negotiate further climate actions as well as update their Nationally Determined Contributions (NDCs), under which they pledge to reduce their greenhouse gas emissions by a certain time.

Prime Minister Prayut Chan-o-cha is among those attending, as he will announce Thailand's commitments to reduce annual greenhouse gas emission by 20–25% by 2030 as per the country's updated NDCs.

He will also unveil its long-term low greenhouse gas emission development strategies (LT-LEDS), the roadmap for Thailand to achieve net-zero carbon emissions by 2065.

Thailand Country Director for Greenpeace Southeast Asia, Tara Buakamsri, said this year's summit is regarded by stakeholders worldwide as important, as it is expected all participating parties will agree on accelerating climate actions towards the Paris Agreement goals to keep the world's temperature well below 1.5-2ºC.

"This meeting may be humanity's final chance to mitigate the climate crisis, as we have little time left to enhance our climate actions and neutralise our carbon emissions to achieve the climate stabilisation targets under the Paris Agreement and prevent the looming impacts of climate change," Mr Tara said.

According to the latest report on the international commitments to reduce greenhouse gas emissions by United Nations Environment Programme (UNEP) released on Oct 26, global climate actions were still too weak to accomplish the Paris Agreement's goals.

The UNEP report found the latest NDCs for 2030 and other mitigation pledges will put the world on track for a temperature rise this century of at least 2.7°C.

The report suggested that to keep global warming below 1.5°C, the world needs to put additional policies in place to almost halve annual greenhouse gas emissions in the next eight years.

"So, we would like to urge the global leaders at COP26 to announce the formal end of fossil fuels era, as we need to quickly transition away from these polluting fuels that are the major source of greenhouse gas," he said.

"We would like to call on the G20 nations, which are the major contributors of greenhouse gas emissions, to come out with stronger commitments to mitigate the climate crisis and take a leading role in helping poorer countries pursuing their climate pledges."

He also commented on Thailand's stance toward COP26.

He said the country's climate mitigation plans and policies are inconsistent with the climate emergency challenges.

He said they also fail to take climate justice into account, which may bring about more problems such as rising poverty, inequality, and other social conflicts.

Rewadee Prasertcharoensuk, from the Sustainable Development Foundation, also urged the government and the other parties at COP26 to pay more attention to local communities and small-scale farmers, as they can help mitigate the effect of climate change.

"So, if the government lets them participate with the conservation and management of local resources, they can help food security and lessen the impacts of climate change."

Meanwhile, Natural Resources and Environment Minister Varawut Silpa-archa said the country's climate pledges are plausible to accomplish and also in line with its economic development.

Apart from the commitments to the Paris Agreement, Mr Varawut said authorities are also planning many new policies and regulations such as electric vehicle promotion and forest protection and reforestation.

"With advancing technologies and stricter climate mitigation measures, we are sure that Thailand can accomplish carbon neutrality even sooner than the 2065 deadline," he said.

WASHINGTON - An independent investigation into allegations of misconduct in US women's soccer released Monday found "systemic" abuse and sexual misconduct by coaches.