Migrant workers from Myanmar walk out of the forest where they had been hiding in Kanchanaburi province on Saturday. (Photo supplied: Piyarat Chongcharoen)

Three dead job-seekers from Myanmar were among 23 migrants found dumped in a rubber plantation in Kamphaeng Phet on Saturday after an accident involving the vehicle transporting them.

Police and local officials rushed to the plantation at Nong Nok Kratha village Moo 12 in tambon Na Bo Kham after being alerted by local residents late on Saturday morning.

When they arrived, they found a group of migrants aged between 21 and 40. Among them were three dead people — one man and two women — and four injured — two men and two women. None had entry documents, Thai media reported.

One of the migrants, identified only as Mr See, told police that the group, numbering 23, had paid between 7,000 and 23,000 baht each to job brokers who arranged a pickup truck to transport them from the Myanmar border into Thailand through Mae Sot district of Tak province.

While travelling downhill, the pickup overturned on Friday night, causing injuries and deaths, said Mr See, who was unable to tell where the accident happened.

Shortly afterward, he said, another pickup arrived at the scene to pick them up. When the vehicle arrived at the rubber plantation, the driver stopped and told them to get out, claiming he would call an ambulance.

However, the ambulance never arrived. Local residents passing by the area saw the group and alerted police.

The bodies of the three accident victims were sent for autopsy and the other injured people were taken to a local hospital, said Pol Maj Gen Phiphat Chummaneekun, chief of Muang Kamphaeng Phet police. The remaining 16 migrants were taken to Wat Nong Nok Kratha in tambon Na Bo Kham for Covid-19 tests.

Provincial police have contacted their colleagues in Tak to check whether there had been any road accidents in their area. They had already contacted stations in Kamphaeng Phet but were told there had been no accident reports. (Story continues below) 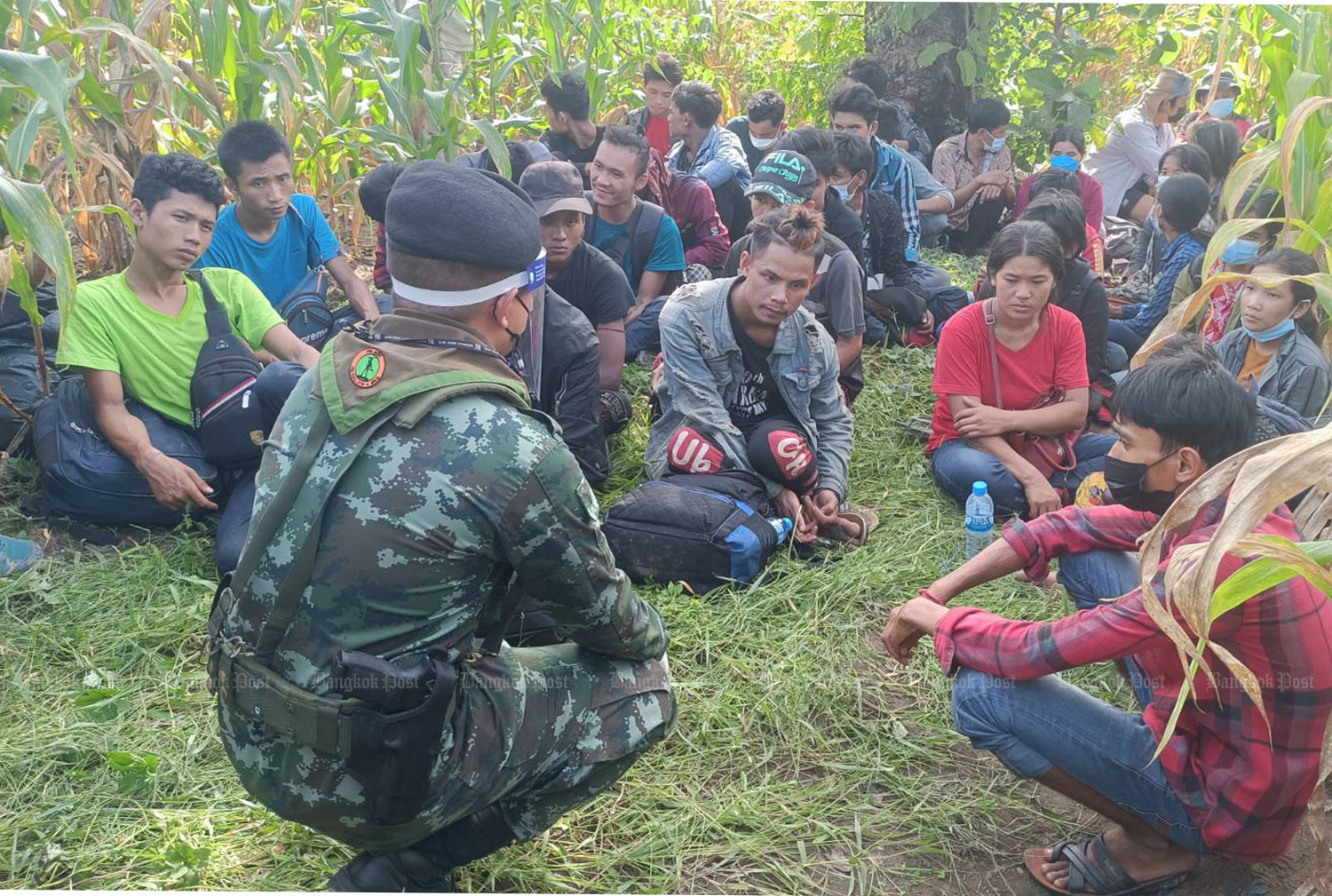 A soldier questions some of the 33 Myanmar job seekers found in a corn field in Muang district of Kanchanaburi on Saturday. (Photo supplied: Piyarat Chongcharoen)

Migrant workers have been entering the country from Myanmar in increasing numbers in recent weeks as economic conditions deteriorate in their country. At the same time, some Thai businesses reopening after months of Covid restrictions are finding it hard to attract local workers as many had returned to their home communities during the lockdown.

But those migrants who do make it across the border are at increased risk of being caught as the government has stepped up enforcement, mainly because of concern about the spread of Covid-19.

On Saturday, another 62 illegal migrants from Myanmar were arrested in two separate operations in border areas of Sai Yok and Muang districts of Kanchanaburi.

In the first operation, a joint patrol of soldiers from the Lat Ya Task Force and local police found 24 men and five women hiding in a forested area at Ban Thai Muang village Moo 3 in tambon Bong Tee of Sai Yok district at around 1.30pm.

During questioning, they told investigators that they had travelled from Myawaddy, Bago and other townships in Myanmar. They said they were to pay job brokers between 18,000 and 20,000 baht each on arrival at workplaces in Samut Prakan, Samut Sakhon, Suphan Buri, Chon Buri and Ratchaburi provinces.

At around 2pm, another team of soldiers and police arrested 33 migrants — 21 men and 12 women — in a corn field at Ban Pratudan village Moo 14 in tambon Ban Kao of Muang district.

This group said they were headed for jobs in Samut Prakan, Ratchaburi and Bangkok, where they had arranged to pay brokers 19,000 baht each.

After health checks, all 62 detainees were sent to local police stations for legal action and deportation.