The government is trying to trace 307 people who arrived from eight southern African countries hit by the latest Covid-19 "variant of concern", Omicron, and are still in the country.

Centre for Covid-19 Situation Administration spokesman Taweesilp Visanuyothin said on Wednesday that between Nov 15 and 27, 333 people arrived from the eight high-risk African countries.

Three had already left, so 330 remained in Thailand but only 23 of them had been traced, he said.

They had arrived from either South Africa, Botswana, Mozambique, Zimbabwe, Namibia, Malawi, Eswatini or Lesotho.

Of the 330 still here, 252 entered Thailand through the Sandbox programme, and only 11 of them had been traced. the other 78 people had entered the normal quarantine process and only 12 of them were traced.

Dr Taweesilp urged them to report to their nearest public hospital for free RT-PCR tests.

He asked the people to quarantine themselves or stay in quarantine facilities until they reached day 14 since their arrival, and to have Covid-19 tests during the quarantine period.

“Please be informed of this inconvenience. We must arrange for this in the interest of most people in Thailand,” Dr Taweesilp said.

Failure to comply would be a violation of the Communicable Diseases Act, he said. (continues below) 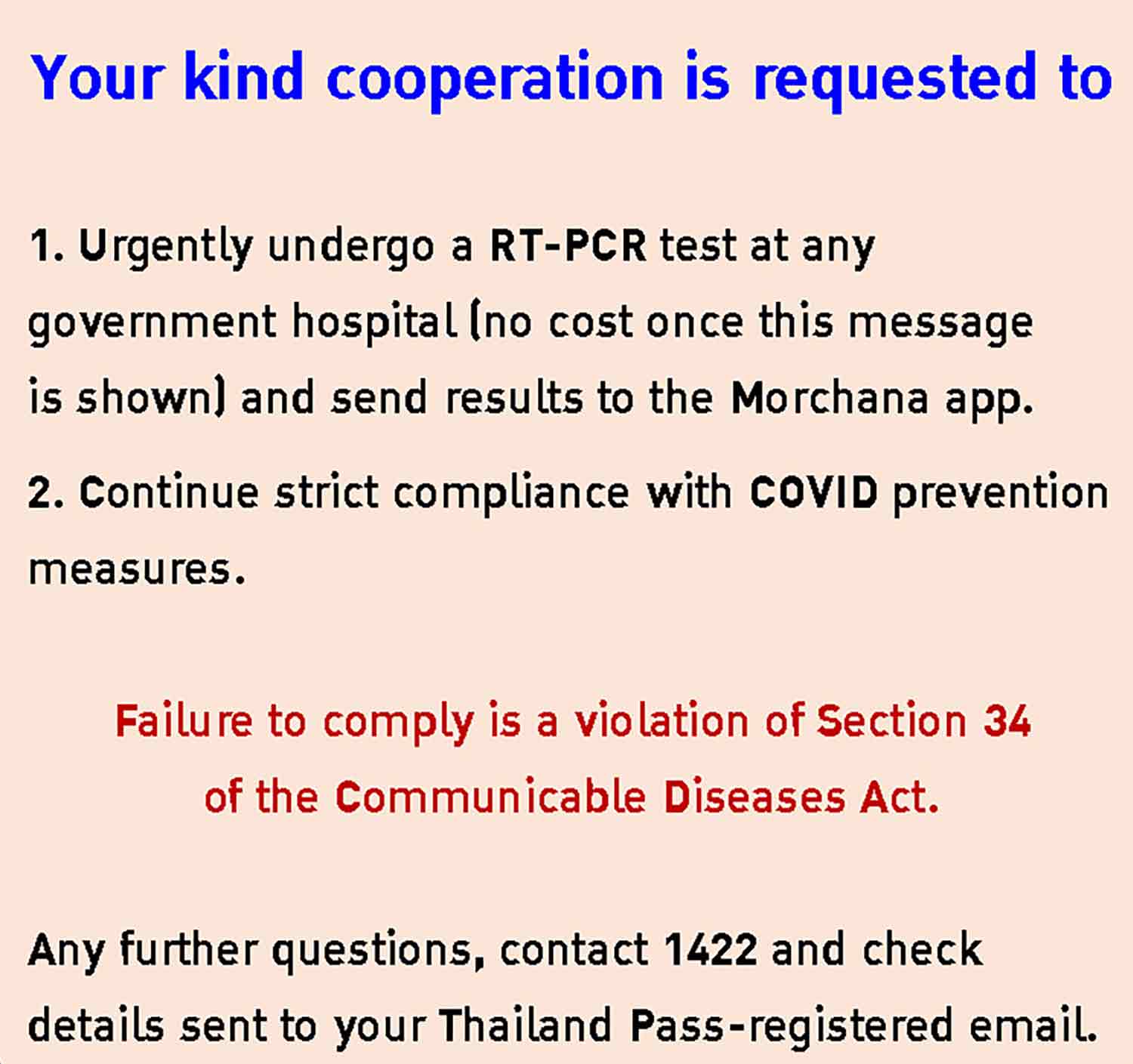 The government is asking people who arrived from eight southern African countries and remain here untraced to report for Covid-19 testing.

Thai returnees from the eight countries could be admitted to free state quarantine at the Bamrasnaradura Infectious Diseases Institute in Nonthaburi, unless they could afford their longer stay at alternative quarantine facilities, he said.

During the same period, 453 people from other low-risk African countries stayed in Thailand and 18 of them had been traced, he said.

Dr Taweesilp also urged people who have not been vaccinated against Covid-19 to register for inoculation, even though Omicron has not yet been detected in Thailand.

He said only about 50% of people in the Northeast had been vaccinated to date.

Dr Taweesilp said the Department of Disease Control reported that the symptoms from Omicron were little different from those of other variants.

There were reports that patients had muscle ache and fatigue, but did not lose their sense of smell and taste.

"Omicron's symptoms are not severe but the variant is likely to spread faster than other variants because it is quickly replacing the Delta variant in South Africa," he said.

There was not enough information to analyse the reproduction and severity of Omicron or vaccine effectiveness against it, but experts believed vaccines could prevent serious symptoms. Even so, the new variant had already caused death, Dr Taweesilp said.

Dr Taweesilp said it appeared Omicron could significantly avoid antibodies and there was a high chance of reinfection.

Omicron patients had now been found in more European countries - Portugal, Austria, Sweden and Spain - in addition to the United Kingdom, Italy, Germany, the Netherlands, Belgium, Denmark, Switzerland, Turkey and the Czech Republic.

In the Asian continent, Japan was the latest country with Omicron infection, in addition to Israel, Hong Kong and Singapore.

The new variant was first detected in South Africa and since then reported in Botswana, Mozambique, Zimbabwe, Namibia, Malawi, Eswatini and Lesotho in southern Africa, as well as in Canada and Australia.

"Most infected people were from the eight African countries," Dr Taweesilp said.

The World Health Organization said on Wednesday that travel bans would not stop the variant spreading, and could do more harm than good. It called for a "calm, coordinated and coherent" response with "rational, proportional risk-reduction measures".