One gunshot almost four years ago could change the life of construction tycoon Premchai Karnasuta on Wednesday.

At 9am that day, the provincial court in Thong Pha Phum district of Kanchanaburi will read out the ruling of the Supreme Court before Mr Premchai and two other defendants on their allegedly illegal hunting of protected wild animals in the western Thung Yai Naresuan Wildlife Sanctuary in 2018.

The verdict by the highest court will bring to an end what became one of the most-watched cases in recent history.

The former Italian-Thai Development Plc (ITD) president's saga might never have begun had park authorities not heard a single gunshot on Feb 4, 2018.

Timeline to the gunshot

According to the document used by public prosecutors in the court battle, Mr Premchai and three other defendants -- driver Yong Dodkruea, maid and cook Nathee Riamsaen and hunter Thanee Thummat --had received permission to enter Thung Yai Naresuan for what they called a "nature-studying trip". The four met park chief Wichien Chinnawong at 3pm on Feb 3, 2018 to ask for route advice before they entered the sanctuary.

At 2pm the following day, Mr Wichien assigned a team of park officials to inspect Huay Pachi, the location where Mr Premchai and three other companions were camped out.

The officials arrived at the campsite at 4pm and found only three of them there — Mr Premchai, Mr Yong and Ms Nathee. One of the park staff members told the businessman that their boss had invited the group to have dinner at his office and stay overnight there.

Mr Premchai declined the offer, saying rice was already being prepared for their dinner. 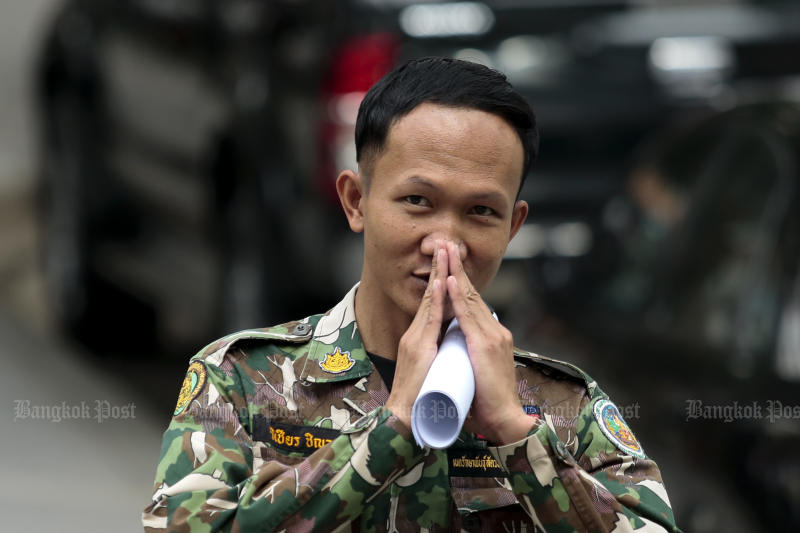 Wichien Chinnawong, who runs the Thungyai Naresuan Wildlife Sanctuary in Kanchanaburi, arrives at the Natural Resources and Environmental Crime Suppression Division on March 20, 2018 to give a statement on the illegal hunting case involving construction tycoon Premchai Karnasuta. (Photo: Patipat Janthong)

The officials began heading back, but after about 70 metres they heard a gunshot from the direction of the camp.

They radioed the park chief, who ordered them to immediately take the campers out of the forest and thoroughly check the campsite and the area around it.

As they were returning to the camp, they passed Mr Premchai in another vehicle. He told them he was going to see Mr Wichien.

On reaching the campsite for the second time, the park officials saw Mr Thanee targeting a squirrel with a rifle and ordered him to stop. A shell case from a shotgun was later found about 700 metres away.

Mr Premchai returned to the campsite at 6.30pm that evening and ordered his three companions to pack their belongings and prepare to leave. But park officials ordered them not to move, saying Mr Wichien was on his way. When he arrived, the four were detained.

Raids on the camp conducted by Mr Wichien and his staff that night and the following day -- Feb 5 -- revealed firearms, ammunition and the carcasses of a rare black panther, a kalij pheasant and a barking deer.

On Feb 6, on Mr Wichien's instructions, police charged the four with illegal possession of wildlife carcasses and other poaching-related offences. All denied the accusations.

The primary court on March 19, 2019 sentenced Mr Premchai to one years and four months in jail. Mr Yong was imprisoned for one year and one month, and Mr Thanee three years and five months, while Ms Nathee received a four-month suspended sentence.

The defendants were ordered to pay 2 million baht in damages caused to the sanctuary.

All were granted bail to take their case to the Appeal Court.

All were granted bail. Ms Nathee accepted the suspended jail term handed down by the first court, while the other three launched a final appeal to the Supreme Court. 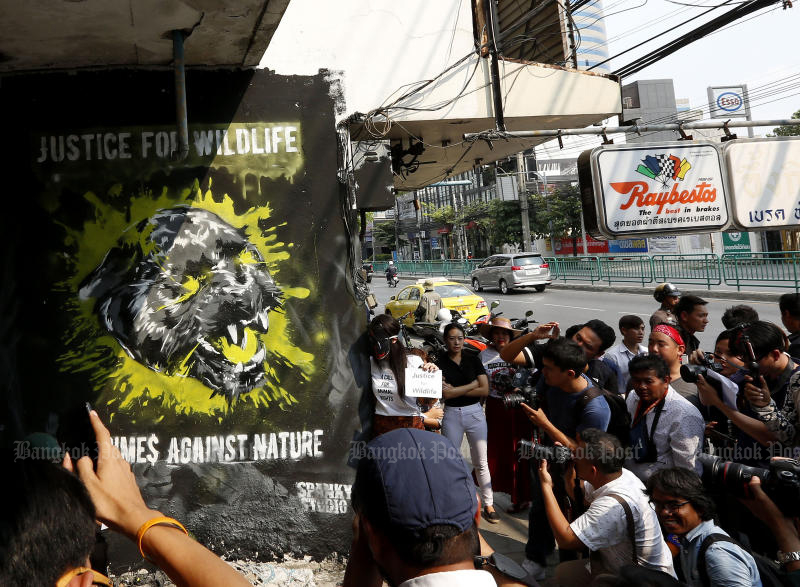 Graffiti artists from the 'A Call for Animal Rights Thailand' group gather near the Italian-Thai Development Plc offices on Phetchaburi Road on March 8, 2018. They were protesting against the wildlife poaching case involving Mr Premchai. (Photo: Pattarapong Chatpattarasill)

The case ignited a public outcry and rallies were held by environmentalists and others on March 8 and May 15, 2018 to express their anger about the poaching allegedly committed by the construction firm's  former president.

They called on the government to reconsider all contracts with the company if Mr Premchai was found guilty.

Sasin Chalermlarp, chairman of the Seub Nakhasathien Foundation, posted a long message on the foundation's website on Sunday saying that what happened on Feb 4, 2018 was completely intolerable.

"Society followed the case that day and made clear that what you and your subordinates did in the big forest was unacceptable," he wrote.

The environmental activist said the case also showed there were many officials and others committed to protecting Thung Yai Naresuan.