The Public Health Ministry provides a second shot and a booster jab of vaccine against Covid-19 for people at Bang Sue Grand Station in Bangkok on Saturday. (Photo: Nutthawat Wicheanbut)

On Saturday, 4,389 Covid-19 patients were discharged from hospitals after recovering from the coronavirus.

The Centre for Covid-19 Situation Administration (CCSA) on Sunday afternoon reported a jump in imported cases – 54, up from 30 announced on Saturday.

The new imports came from 17 countries led by 14 Thai returnees from Saudi Arabia, eight Thai and non-Thai travellers from each of the United Kingdom and the United States, and four Thais from Malaysia.

The CCSA said the 22 new fatalities were between the ages of 29 and 88 years old, all of them Thai nationals.

Samut Prakan, Yala and Krabi logged the most new deaths – two each. Bangkok registered one death while a single fatality was reported in each of the adjacent provinces of Pathum Thani and Nakhon Pathom.

Other central plain provinces further from the capital recorded three more deaths: one each in Phetchaburi, Lop Buri and Samut Songkhram.

The Northeast had two new fatalities, one in Buri Ram and one in Nong Bua Lam Phu.

Of the local infections, 2,759 were confirmed at hospitals and 22 via mass testing.

On Saturday, 41,793 people received Covid-19 tratment at hospitals, including 928 seriously ill patients and 249 dependent on ventilators.

The vast majority of the Covid cases and deaths have occurred since April 1, around when the third wave of Covid-19 began.

The death toll stood at 21,283 during the third wave and 21,377 since the beginning of the pandemic. 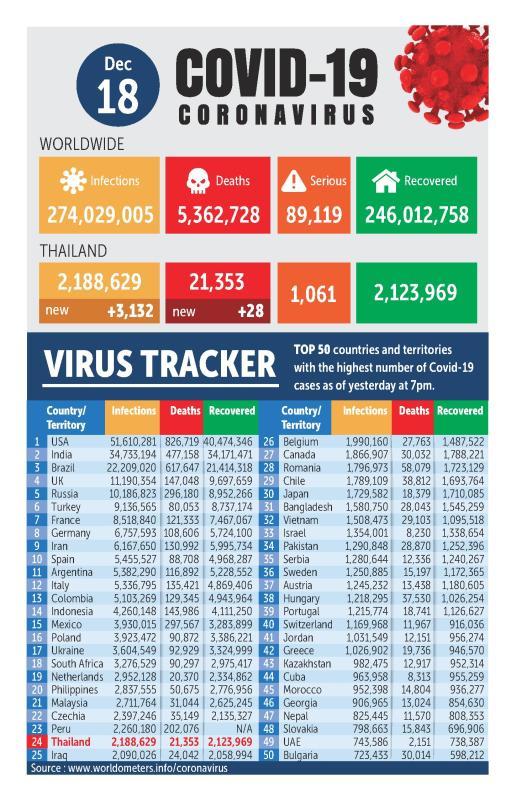